The studio was busy over the past two days with quite a bit of different activity than we’d experienced in the old studio. Tuesday evening had 4 guests, models all, two also photographers and our first studio rental clients. They were here for four hours. I was editing images from our own recent sessions while they were here and heard plenty of giggling and laughter and more than a few catcalls they were giving each other in encouragement. When they finished they expressed how great a time they had and gave the space high marks for layout, decor, props and wardrobe, going so far as to say the photos on the site don’t do it justice. They repeated a few times “please keep this available, we want to come back”.

Yesterday morning I had a session that featured no human being, no animal for that matter. I picked up a piece of graphics work to produce a brochure for a property developer. Part of which would include some old plans for a space he’s preparing to offer with a desire on his part to attract a brewpub. Thing is he needs this very very soon and time is not on our side. I personally cannot scan anything larger than 8.5 x 11 inches and the plans far exceeded that. Finding and getting to someone who can wasn’t something we had time for.  A time honored means prior to scanners was to use a camera and a copy stand. I haven’t needed a copy stand in ages and sold mine long ago, so, we improvise. To get the least amount of distortion, and as much even lighting as I could I set up a ladder in Studio C and soft boxes all around. Within minutes I had excellent digital captures of the plans and by later that evening, after the last shoot of the day, the beginnings of a tri-fold brochure. 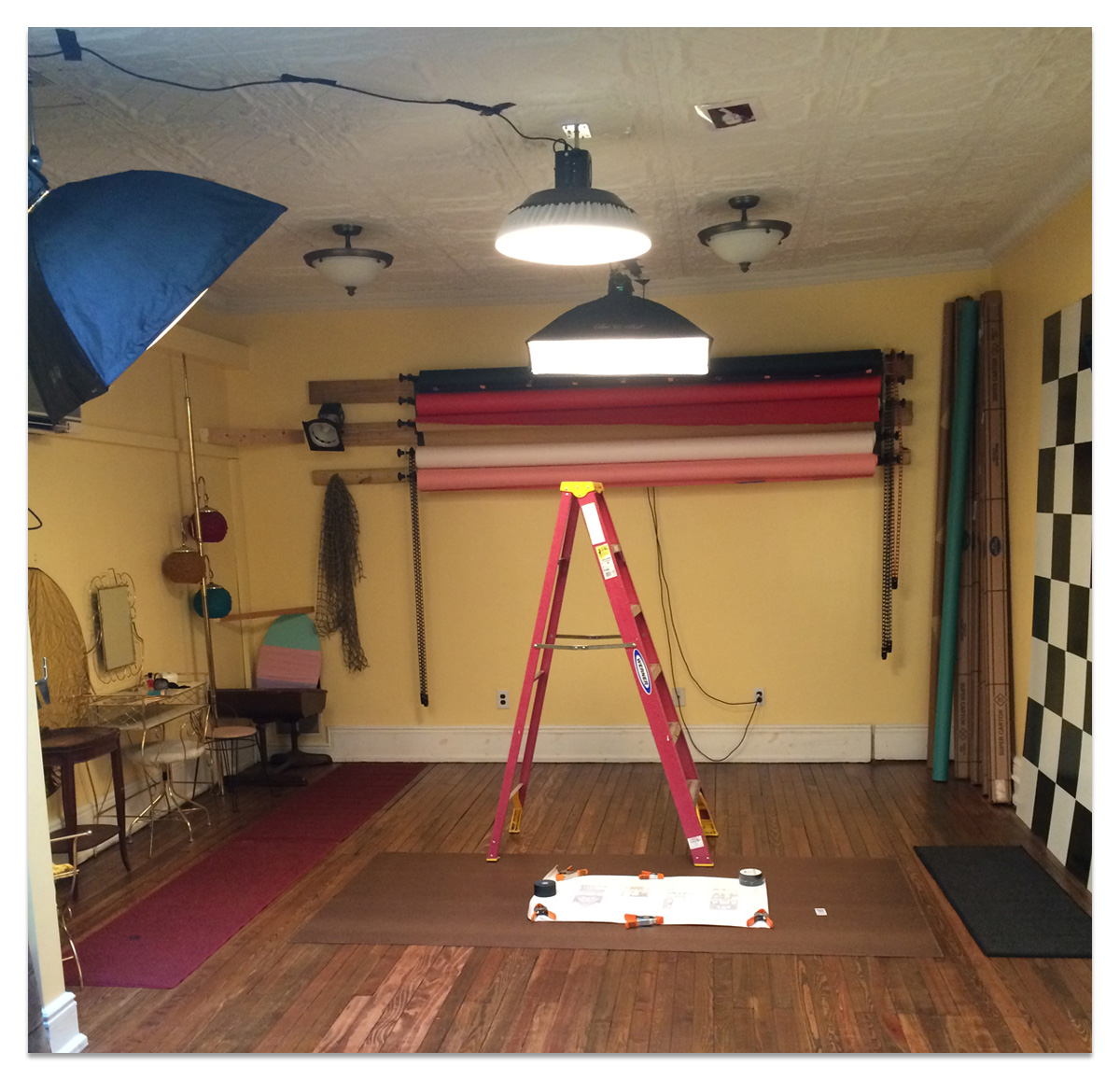 Our human client for the day was a gentleman from south of Harrisburg. It was exciting for me because he is a musician. My history with music is deep having run a music store that I helped grow into a small chain for 13-14 years. I was at the epicenter of the scene in Central PA through the store, a demo studio I ran in one and my photographic services to the community. I cut my teeth with portraits shooting musicians. It had been far too long so this was exciting for me. Ray-Michael Kauffman is a friend of a friend and client of ours Lizz Moldanado. He’s admired the work we’ve done with her and with her encouragement and support he chose us to do some portraits for him. Ray even re-scheduled his session so Liz could come along, Lizz and her three children, all are welcome in the studio be that one or a bus load. It was like a meeting of old friends. Ray has had self esteem issues, never felt comfortable being photographed. He came to the right place, I’ve had those issues myself and so many of our clients do as well. We’ve (Nicole Zedonek of Making Faces Professional) gotten very good at making people feel at ease and when the session itself began it became more of a get together with conversation, laughter and photos in between. I hadn’t looked at the session before I left the studio but when I awoke today I noticed a tag of a post where Ray had already chosen an image to make his profile photo online, like everyone we shoot, he left with an SD card with every image. He used this photo unedited other than his converting it to black and white. This always delights me when people use raw photos. Some studios don’t let people have all their images, I feel they should have every opportunity to see them all and decide which they want to use. Seeing Ray’s post, reading his words and what the session meant to him had me come into the studio this  morning and take a look at the session myself. I found the shot he used and included it here:

I also found one I really love. 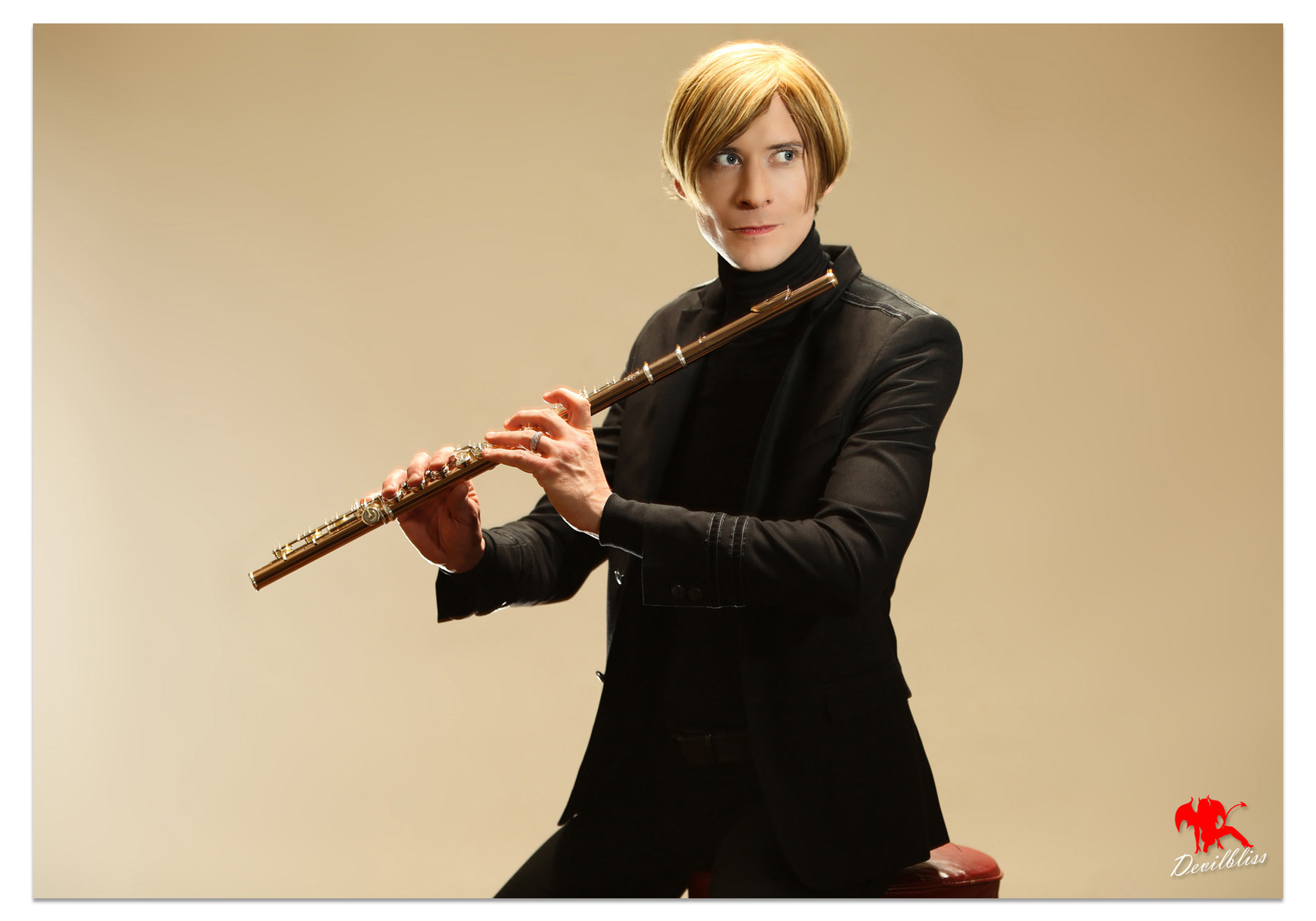 Of his photo the thing that struck me right away is that it was one where he was playing. Very early in the session, to put him at ease we  suggested he literally assume a position he would just prior to a conductor summoning him to perform. Assume that stance and literally play for us. All the while I Would take photos. Ray did just that, he began to do what he loved with his instrument. The sounds were magical in the studio, his playing effortless, an extension of who he is.

Ray also brought along a portion of his vintage sheet music collection, we had to get some shots with that. This one is whole I was up on my ladder (the copy stand earlier in the day) shooting from overhead.

As I was looking at the session’s photos I noticed some shots where I zoomed in on just the sheet music while Ray was changing clothes, like one whole page on the camera frame… And from that I began to play with something of a graphic where the music from his own sheet music collection became part of the image. It’s basic, it’s nothing that hasn’t been done before but it is personalized since it is something of his. With music so much a part of his life I think the aspect of some of the music being “on top” of him, interwoven in a way isn’t just an embellishment for a photo, it’s the truth. Rather than interrupt the image with my logo I decided to sneak it in instead, to the lower left I replaced a clef on a staff with my watermark.

Thanks for coming to see us Ray. I am glad you had a good experience. How someone feels in the studio, in front of the lens makes a world of difference in what is captured.

All images can and should be clicked for a larger view.