Yesterday we had a private session with a new client Jenny Jayne (Go Follow Her Here). She contacted us a week earlier and we were able to fit her in for a 2 look session. She, Nicole (Making Faces Professional) and I chatted back and forth and discussed ideas. As the session approached I was also working out the details for a location shoot I am excited about that I teased some photos of and had noticed Jenny remarking on it. A few emails with the property owner later and I was able to get the location for Jenny while she was here. Her private 2 look session became a 3 look, half day whirlwind of activity. Jenny arrived and I gave her a studio tour and we began chatting as Nicole came in. They went back to makeup and hair and wardrobe and got underway. I was setting up the lighting in a set we put together for her nearby and as soon as i heard “Disney” come up I kinda knew it was over… Nicole is a huge fan and so too is Jenny. There was no turning back.  When they were finished it was time for photos. The set was a vintage vanity, candles, chocolates on some dishes Nicole put together (hot glued into a multi-tiered serving dish) just for this shoot. Earlier I walked up the street to grab a wine glass from a thrift shop since there was some vino in the studio. Between the wine and candles we noticed the set smelled something like a church. (all photos in this post can and should be clicked for larger views)

After the boudoir set we decide for some variety to go with a classic cheesecake look with a simple set of colored (seamless) paper, a fur rug and Jenny! Where the first session was richly detailed with furniture and props this was decidedly clean. It’s wild to see some images side by side and realize they were just minutes apart on the same visit. Definitely something that would add a wealth to a portfolio. 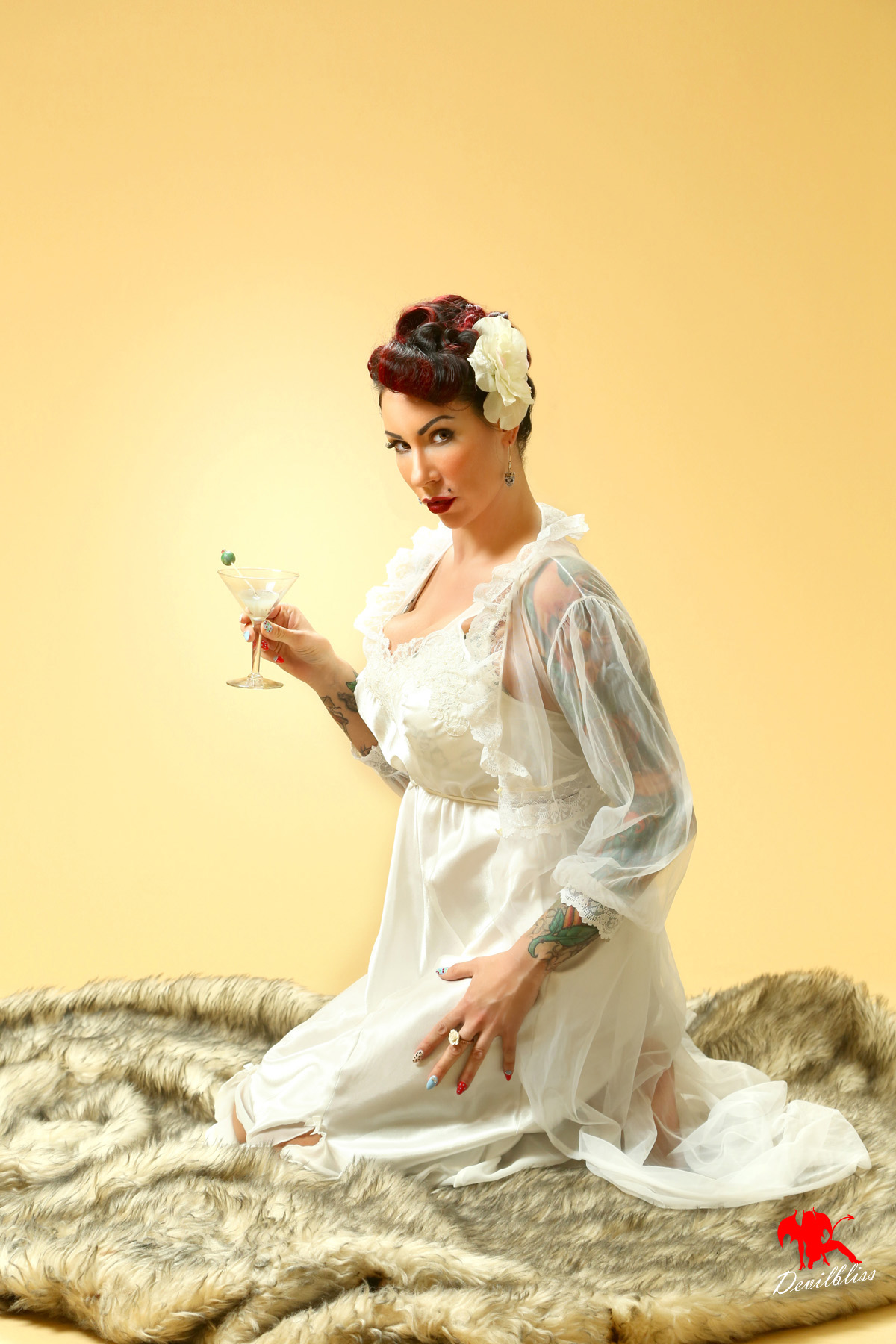 Once we were done with the classic treatment it was time for the location shoot. Luckily it is just a few steps away from our new 2000 sq ft studio. I had begun to move some gear in place while the girls were working on the next look. I came back to the studio and we all walked over together.  I can’t begin to express here how visually arresting this place is to me so instead you can check out this other entry I posted here a few days ago. This isn’t the sort of look for everyone. It’s darker, it’s nearly a movie set. It’s why I dubbed it “The Melancholy Suite” The first two images are some of the first we shot on the landing of one of the stair cases. These are natural light, no strobes, all I used to brighten her up a bit was a gold reflector that I balanced with my legs as I shot the photos. 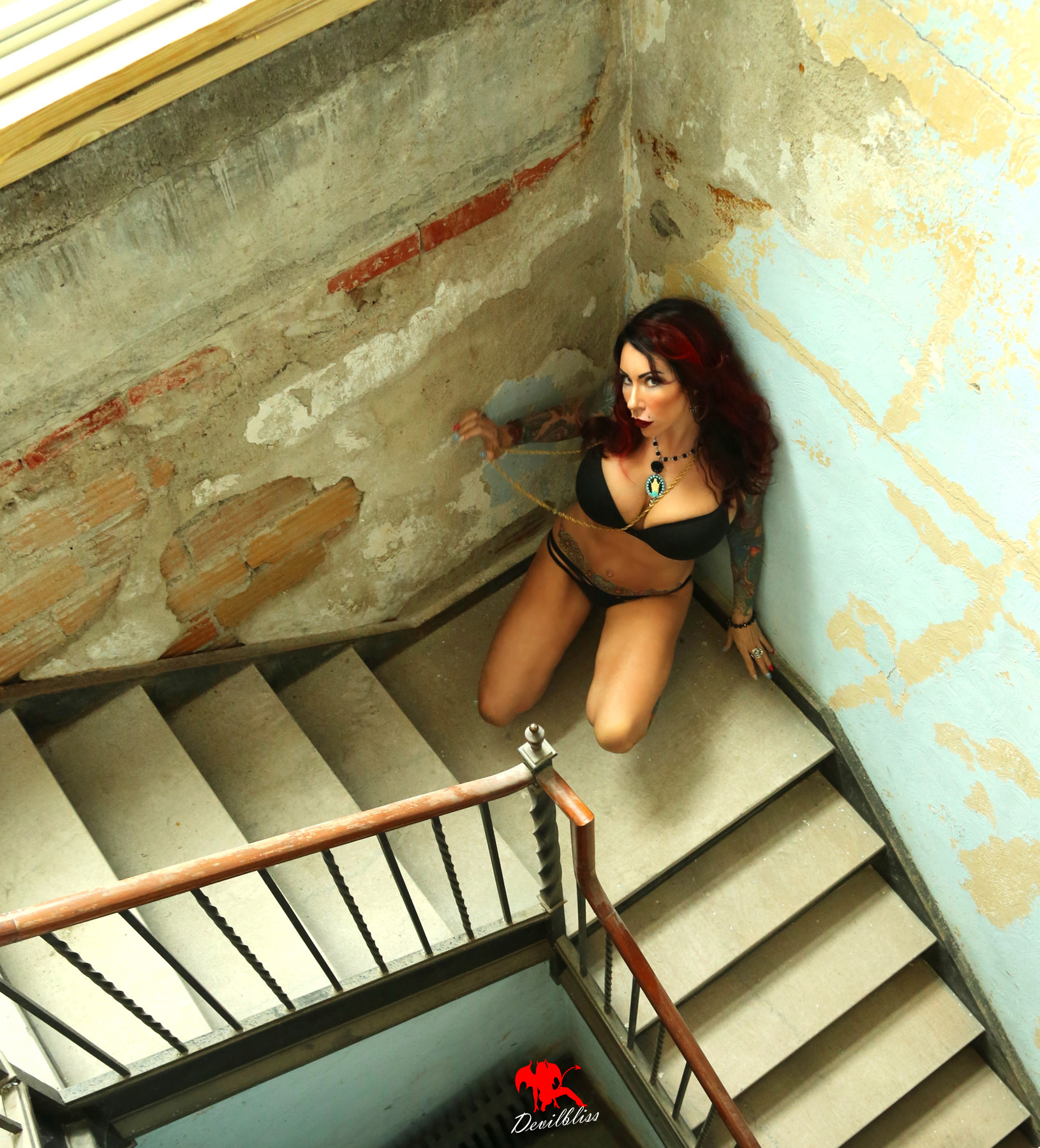 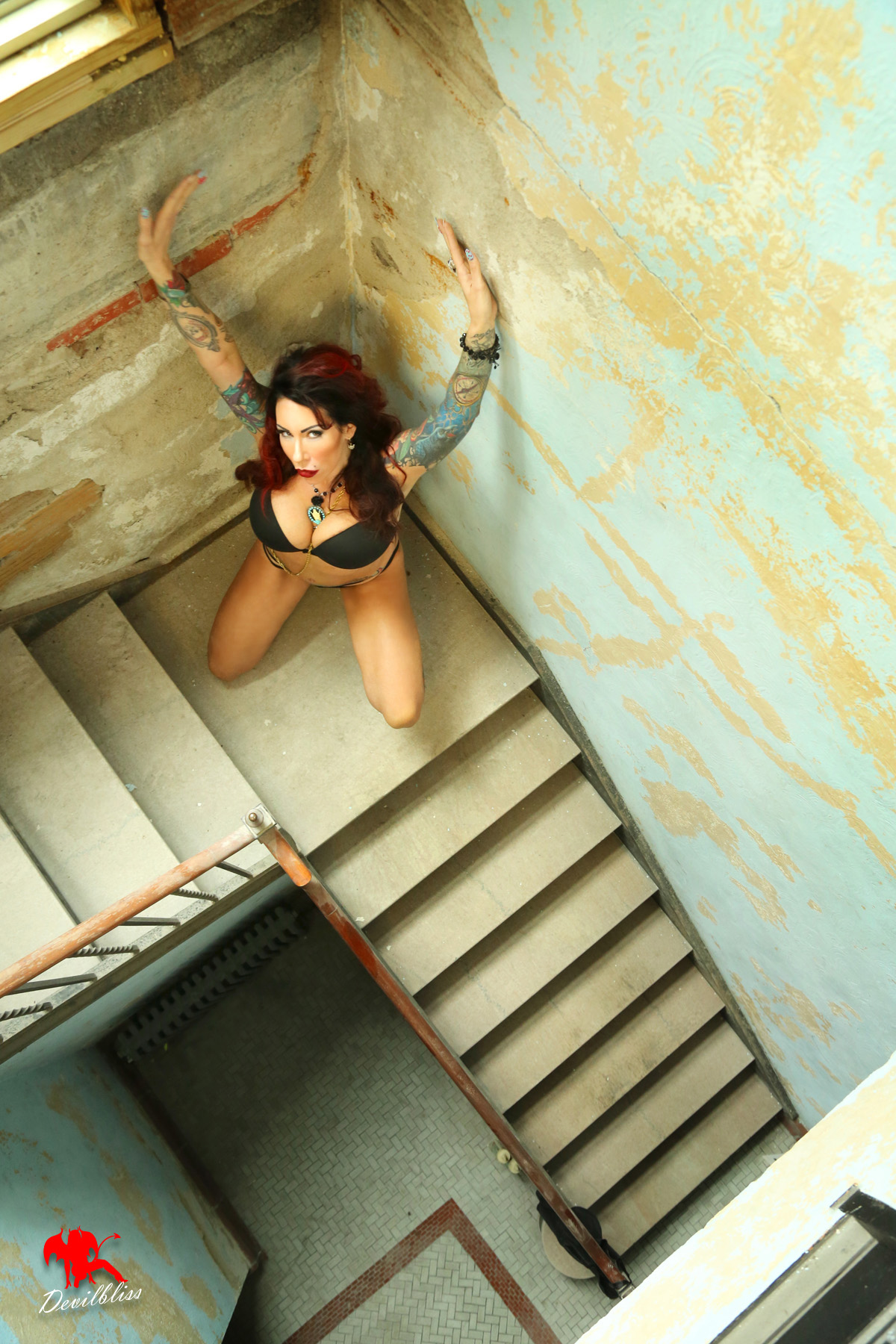 Here’s Jenny in the hallway on the second floor. I love the way the doors frame this. Here a strobe was positioned on the back stairs off to her right.

Next we walked over to that back stairwell. The building is steel and concrete and here it’s about the only materials you’ll see. The photo below is unedited and I am only posting it here to show this space. Jenny is on the landing on what would actually be roof level. The door to her left leads to the roof. Now we did shoot a bunch here but I am putting this photo here for reference only. Pay attention to that area to her right, where the door is. I ended up walking up there and stood in that space. What we got there are some of my favorite shots from the session. 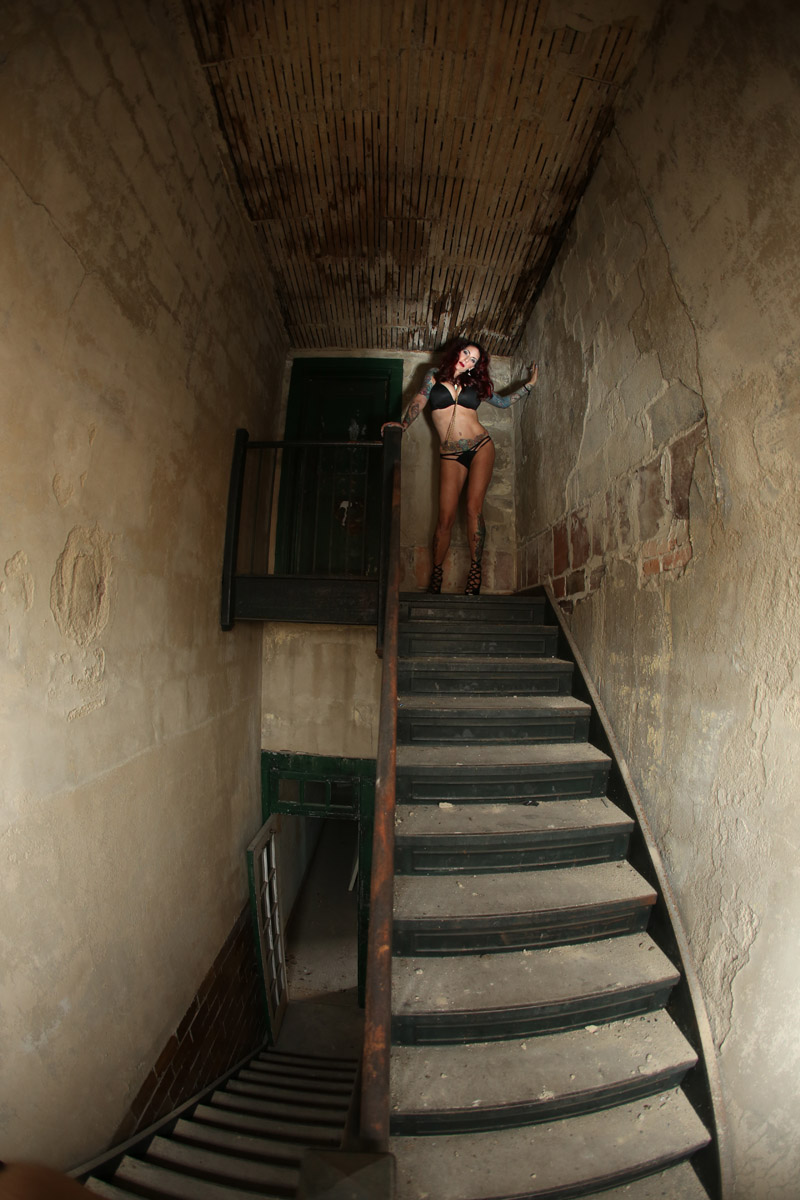 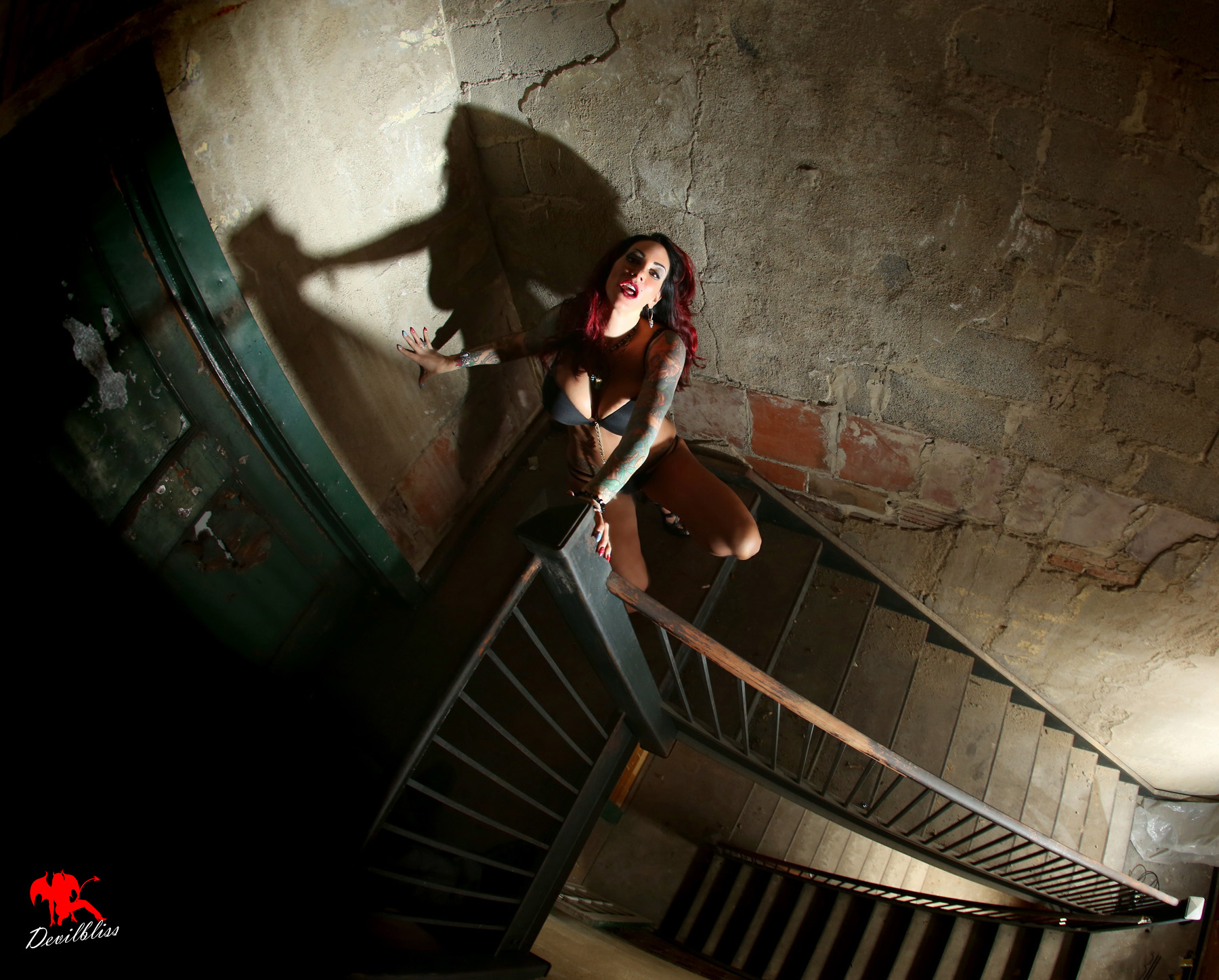 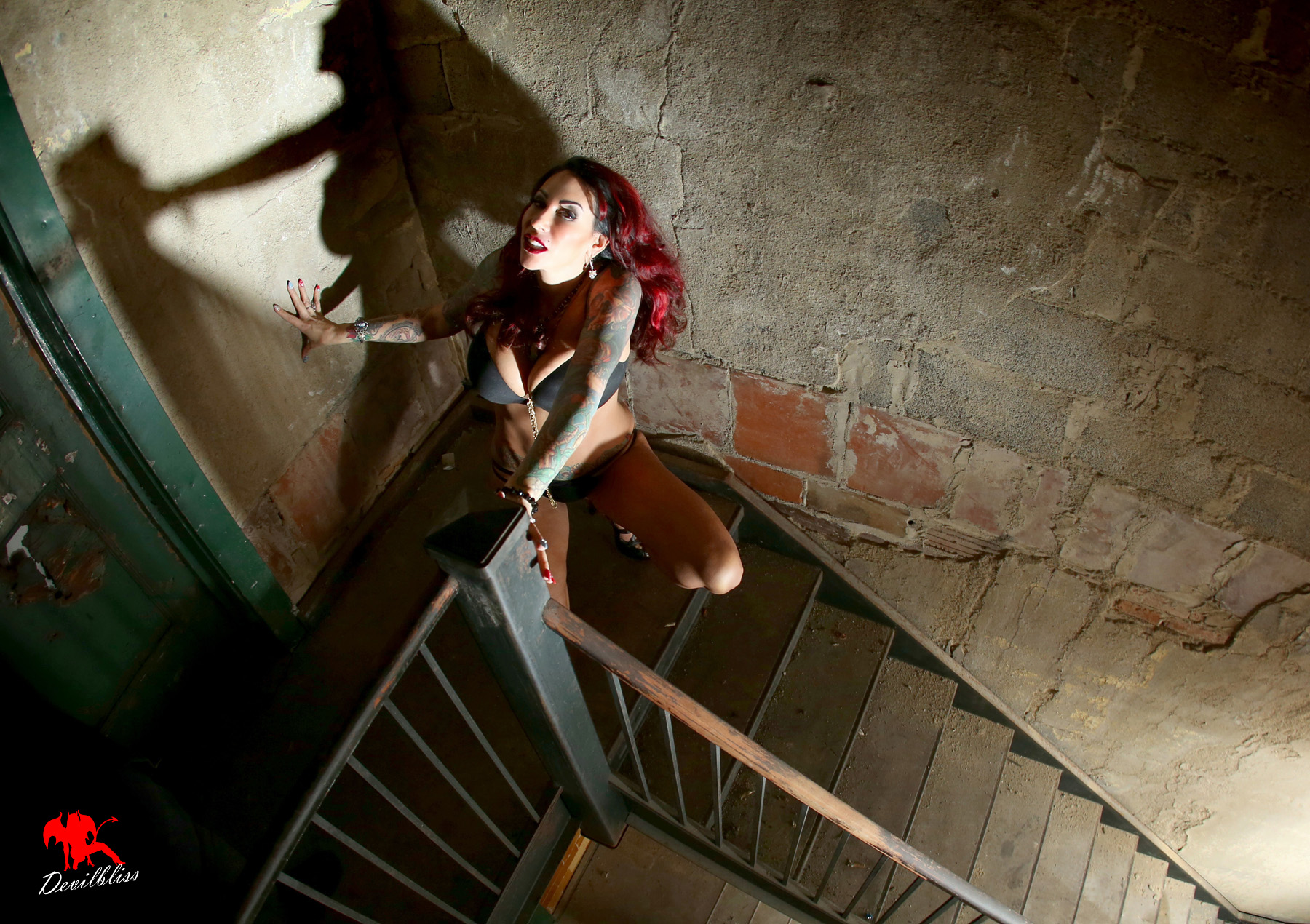 The top photo us uncropped, do click on them and zoom in to get a sense of how this looked and felt. It’s the sort of shot where the setting is as integral as the model. On one hand the actual area she takes up is small and you only see so much of her, which is a bummer. But on the other hand it’s a sweeping backdrop with which to contrast her. It’s not the sort of location or shot you get every day. It’s a transient moment. Now if you study the top image and you pay attention to the door and landing and the fact it seems like you’re looking at it from a spot somewhere further out on the wall you might wonder “where was the camera?”. Well it was at the end of my right arm extended as far as I can (which is actually a pretty good distance since I got some long arms) with my other hand holding the strap in support combined with me leaning over that rail and there you have it. If I bump the levels and exaggerate the photo you can actually see me in the shot: 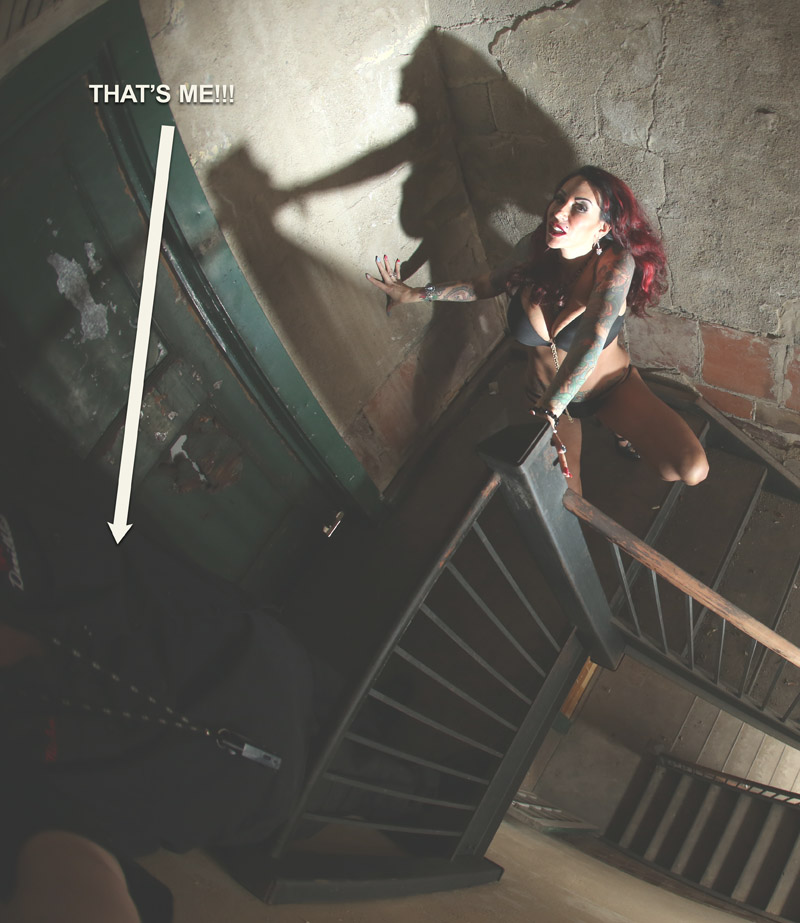 You can also catch my flash remote on the end of my lanyard, I do rely heavily on the radio system to be able to be 30 feet above my light source and still control output, luckily Nicole was on a lower landing and able to pitch in and re-aim the lights here and there.

Next we moved to the second floor bathroom. Generally a tub/shower is a place you go to clean up. Not this one. In fact I think Jenny got the most dirty posing in this relic.

This first image is with available light and a reflector. 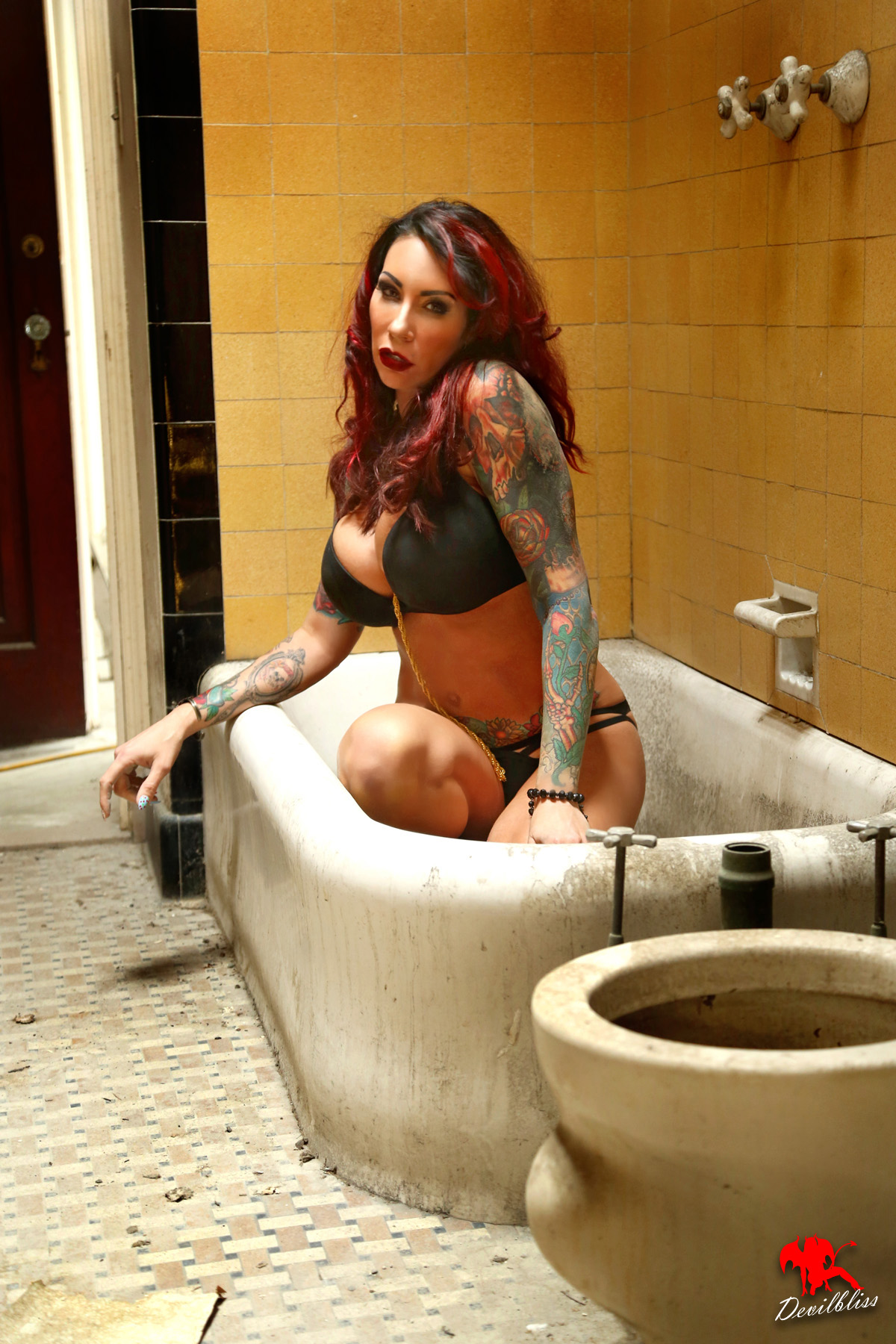 This one, moments later had me running a strobe up high on a stand in front if her: 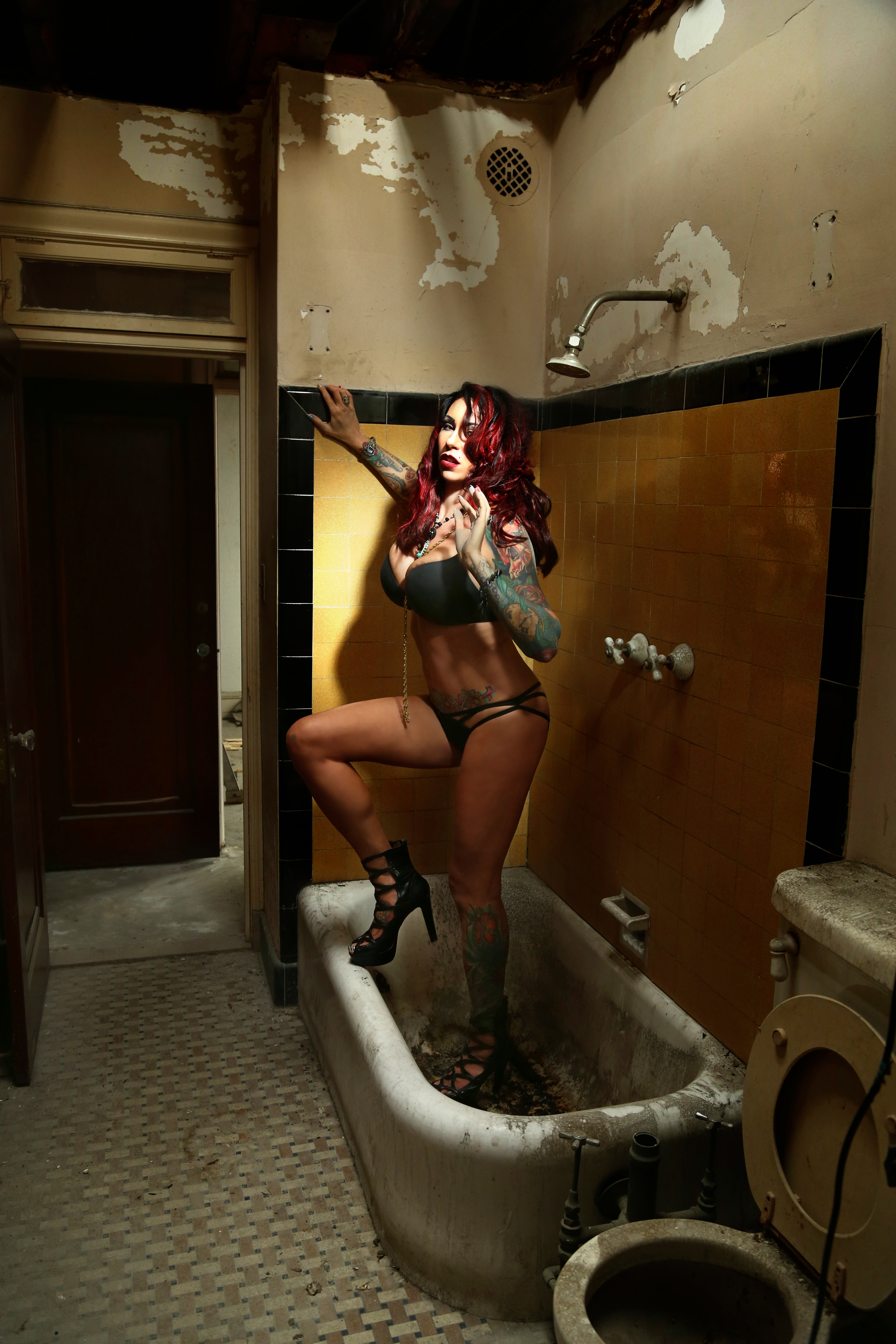 It always amazes me how much you can change things with modifying the light. And there’s several ways to do that each with a different look and feel. Here’s a crop from the above image:

So Jenny’s session is a great example of how  private shoot is different from our themed specials. It’s just you and us. We pull together sets just for you and you get the chance to get a lot of variety. Yes they’re more expensive but in reality, per “look” it’s less than booking several special sessions. They are also flexible with timing, there’s the chance to actually grab something to eat afterwards, you can even stay and immediately review images and leave with edits (all sessions include an SD card with every single image though, you’ll always be able to see EVERYTHING the moment you get home).

Private sessions begin at $400 (and we publish this price, it’s here on this site) if we have a weekday opening you can get a discount off that, more if you’ve shot with us before.

So what are you waiting for?