What a wonderful stretch we had here in the studio between Thursday and yesterday (Sunday). In all there were 17 shoots in those 4 days.  We were re-visited by Cherry Von Sweets on Thursday who travels around 2 hours to work with us. She did another private session where she actually got in the Old Hollywood special we hosted this weekend as well as another look that we love so much we’re actually going to do a special for it as well. The graphic for that shoot links to the event page for it. All images in this post can (and should be) clicked for a larger version. Not every model is shown here as some were doing the sessions to surprise a significant other. 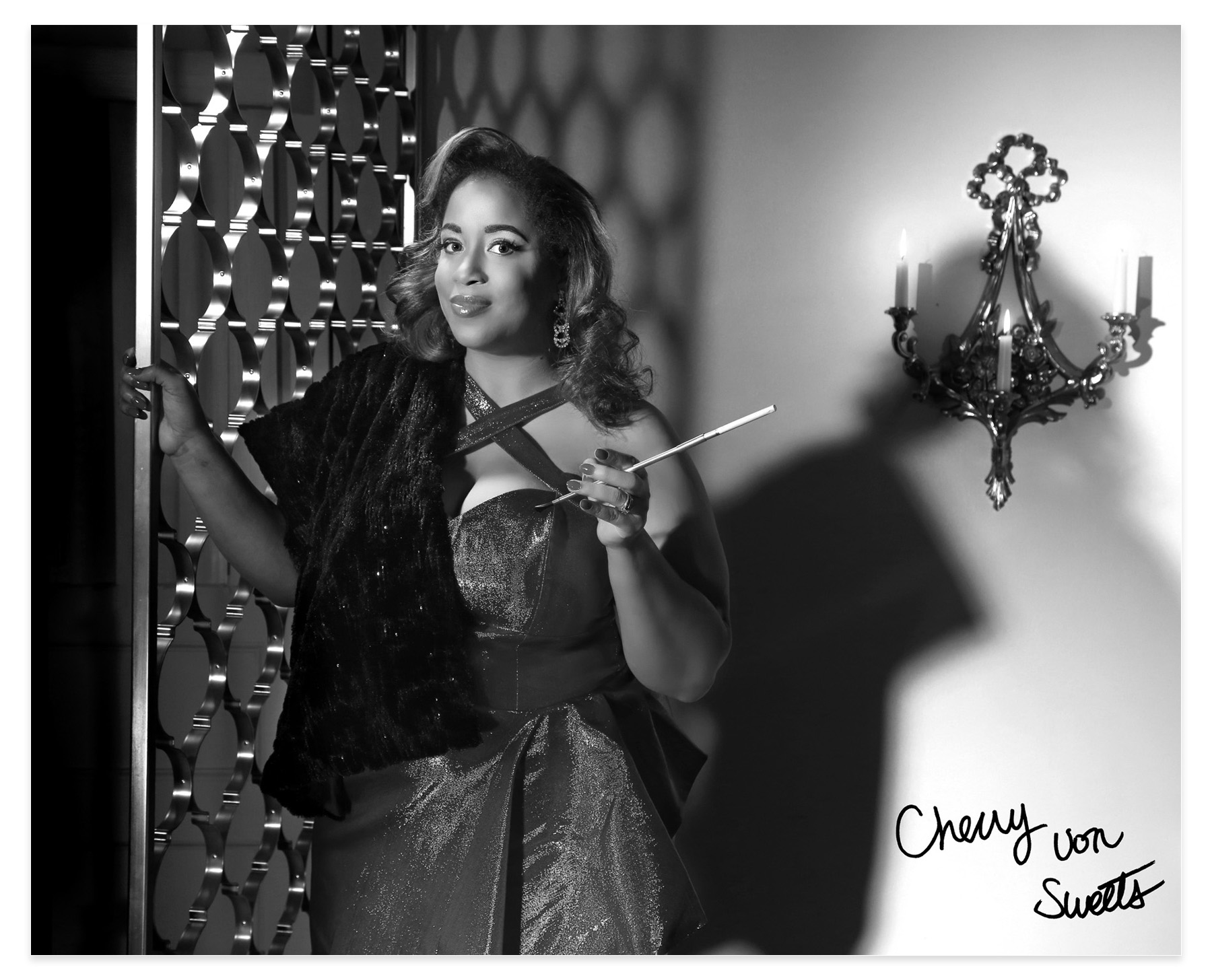 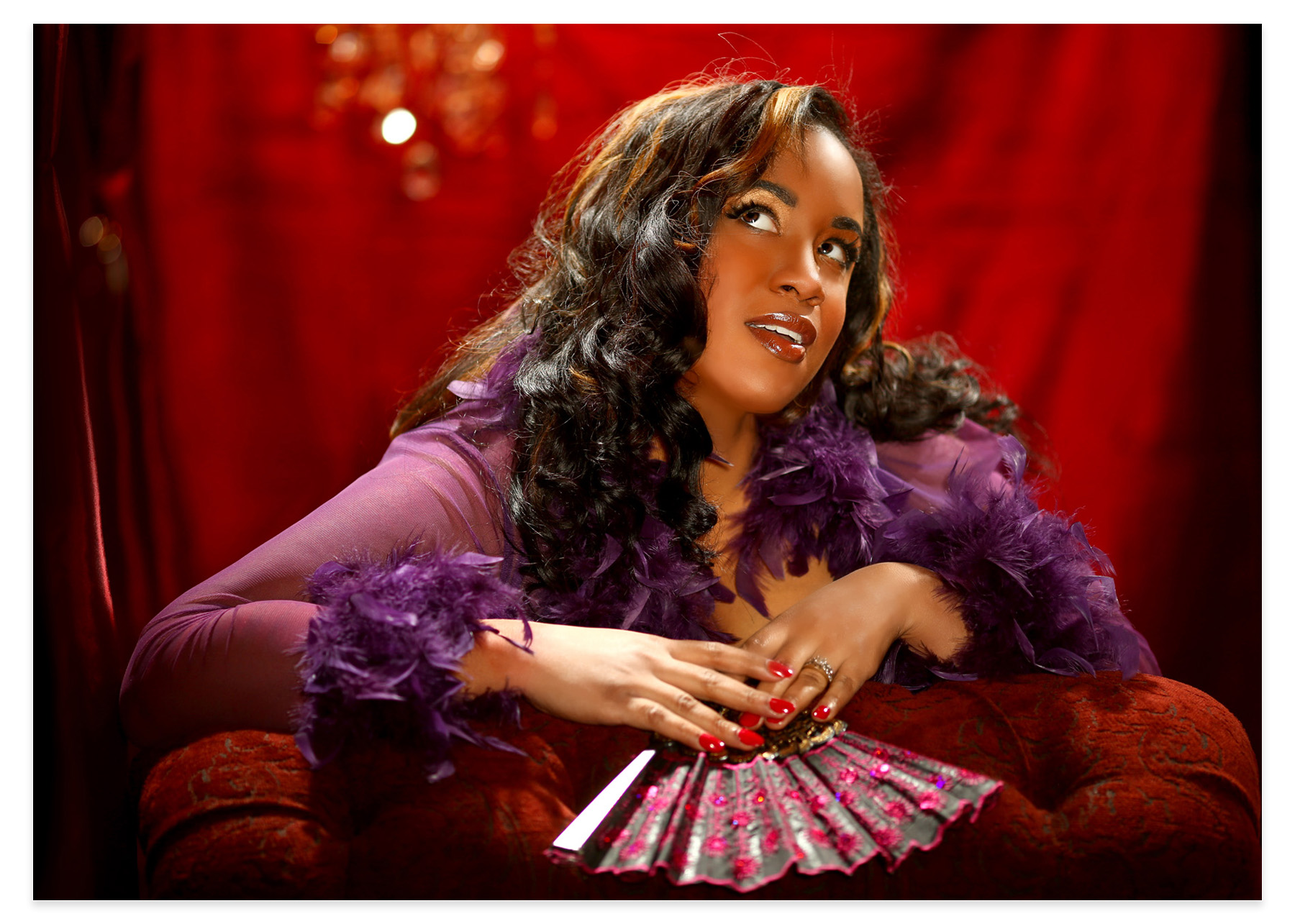 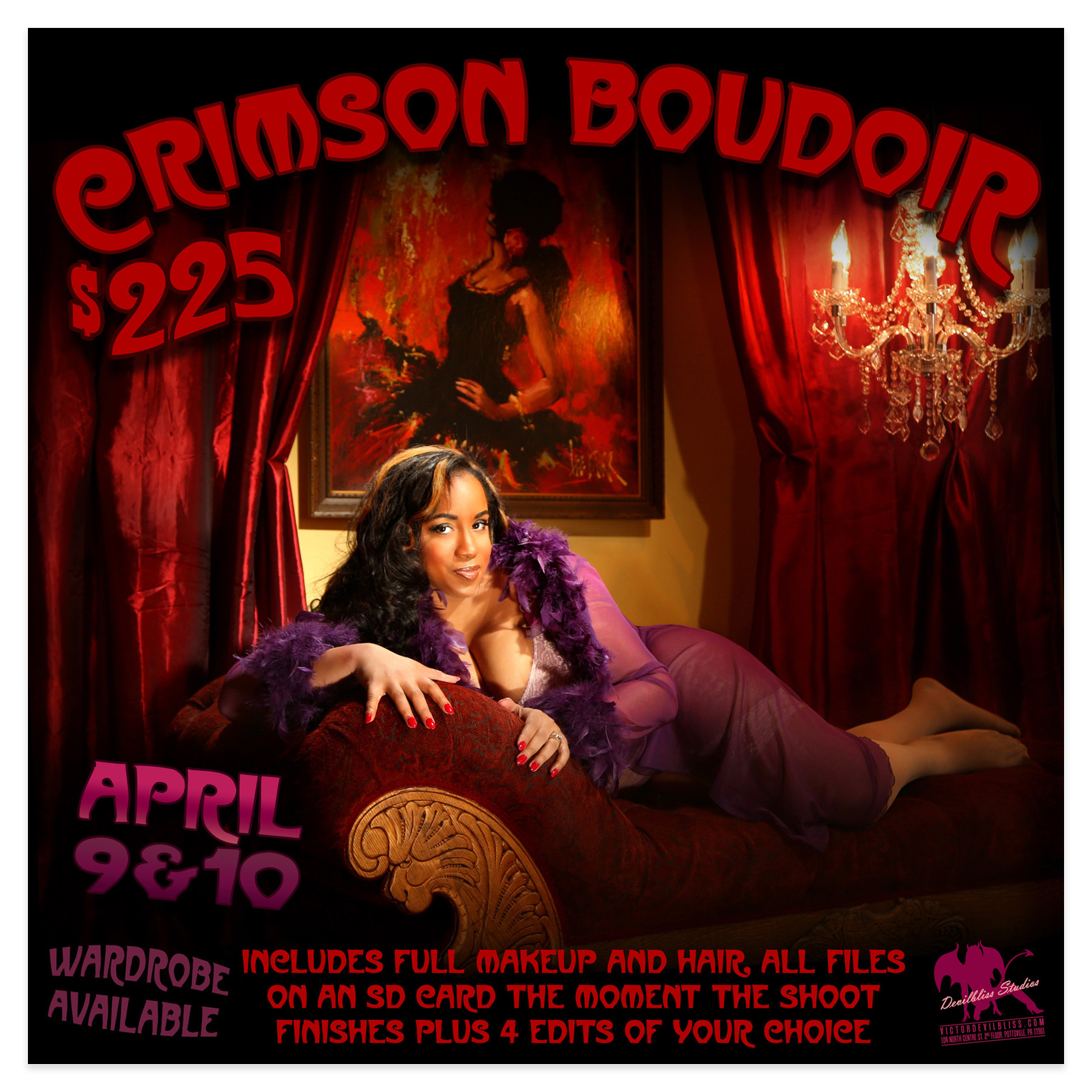 Friday saw 4 session in the studio, 3 for the Old Hollywood special and two very special little visitors who did our Bunny Basket Kids. The first model for the day was someone who was doing their very first shoot. She told me she was super nervous but I couldn’t tell. In short order she was moving so fluidly I knew she was having fun. Later that night she already picked which shots she wanted edited (like every other client of ours, she went home with all her images and saw them immediately) and I got to work on them right away getting her a link to gallery within 12 hours of her making her selections.  Here’s one in the classic black and white style with her very own signature added: 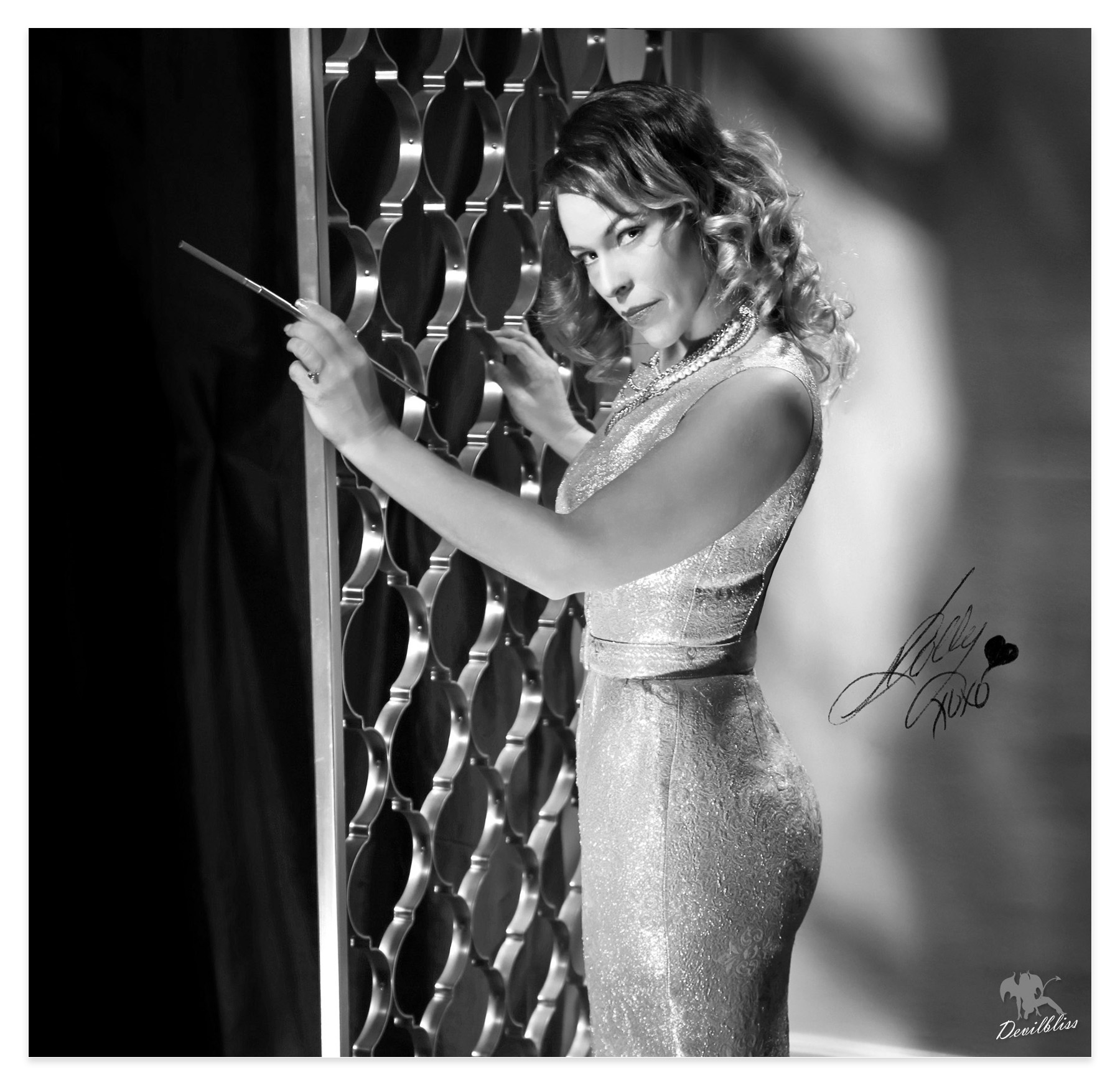 As I was working on another edit of hers, there was something about the wardrobe that bothered me… (the first image is a crop) 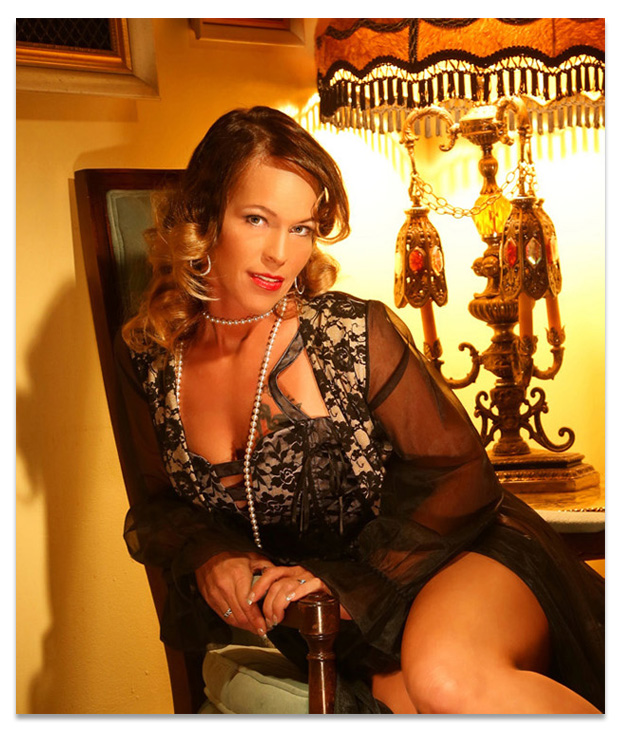 The strap between the robe and the pearls. Once I saw it I couldn’t un-see it. I tell clients all the time that I take a lot of photos for several reasons. One, it gives them plenty of options as far as how they look. It also keeps the shoot flow very casual as we aren’t posing for 5 minutes to take 5 shots and hope they have that “something”. Another benefit is that in cases like this, odds are good I can find an image nearby that may have some element about it that I can use to easily “fix” something that bothers me in another shot. Just like it worked here.  I looked around this file and found one where the strap was more in line with what my head wanted to see. So some grafting later and this is what I had:

Quite often I will do work on images that most clients will never see. Things that when summed together, produce what I find to be high quality images. It’s almost like that old saying “I don’t know if it’s art, but I like it”.

Next we had a gal who first shot with us during one of our seamless specials. This made me happy that now I could get some images for her using my more dramatic lighting. Kelsey was a treat and I loved the hat she added to her wardrobe. 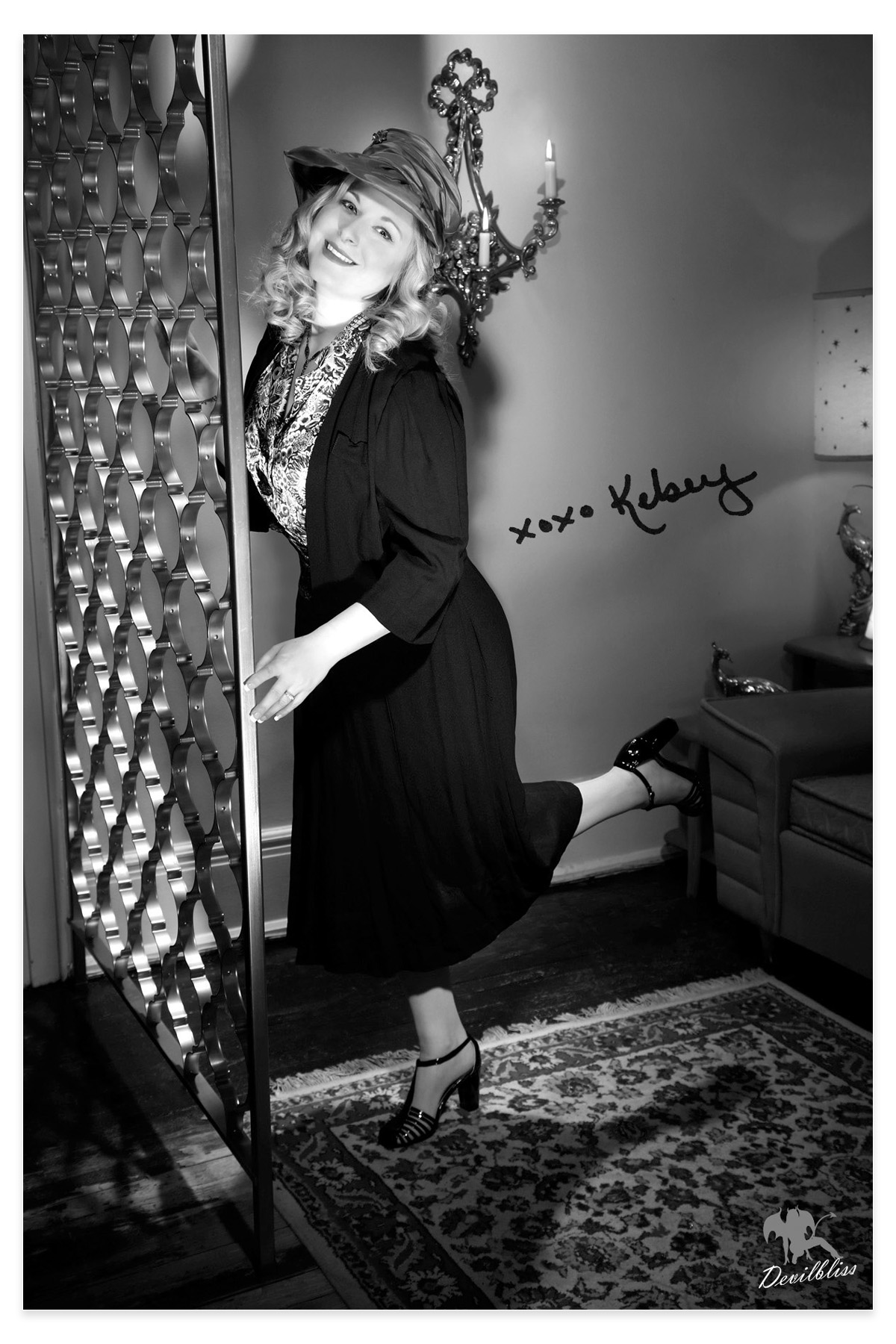 Our next sessions were with some ladies who came up from Fredericksburg and Richmond Virginia. Mary Padgett who formerly lived nearby in Jim Thorpe PA and Sheri Baby who was crowned Queen of the 2015 Rockabilly Rumble which we attended and did a super quick session with her there.  I shot Mary and her guy Jay at Sled Fest in Duncannon last year. Prior to that Nicole had worked with Mary via Relentless Photography some time back. It is always such fun to meet new people and get to know them through a shoot, or as in this case catch up with friends you’ve known for some time.

And then came our pinup queen. Come to think of it I believe I have photographed more Rumble Queens than I haven’t. Of the 2015 Queen though, Sheri was divine in her outfit. The colors were killing me. 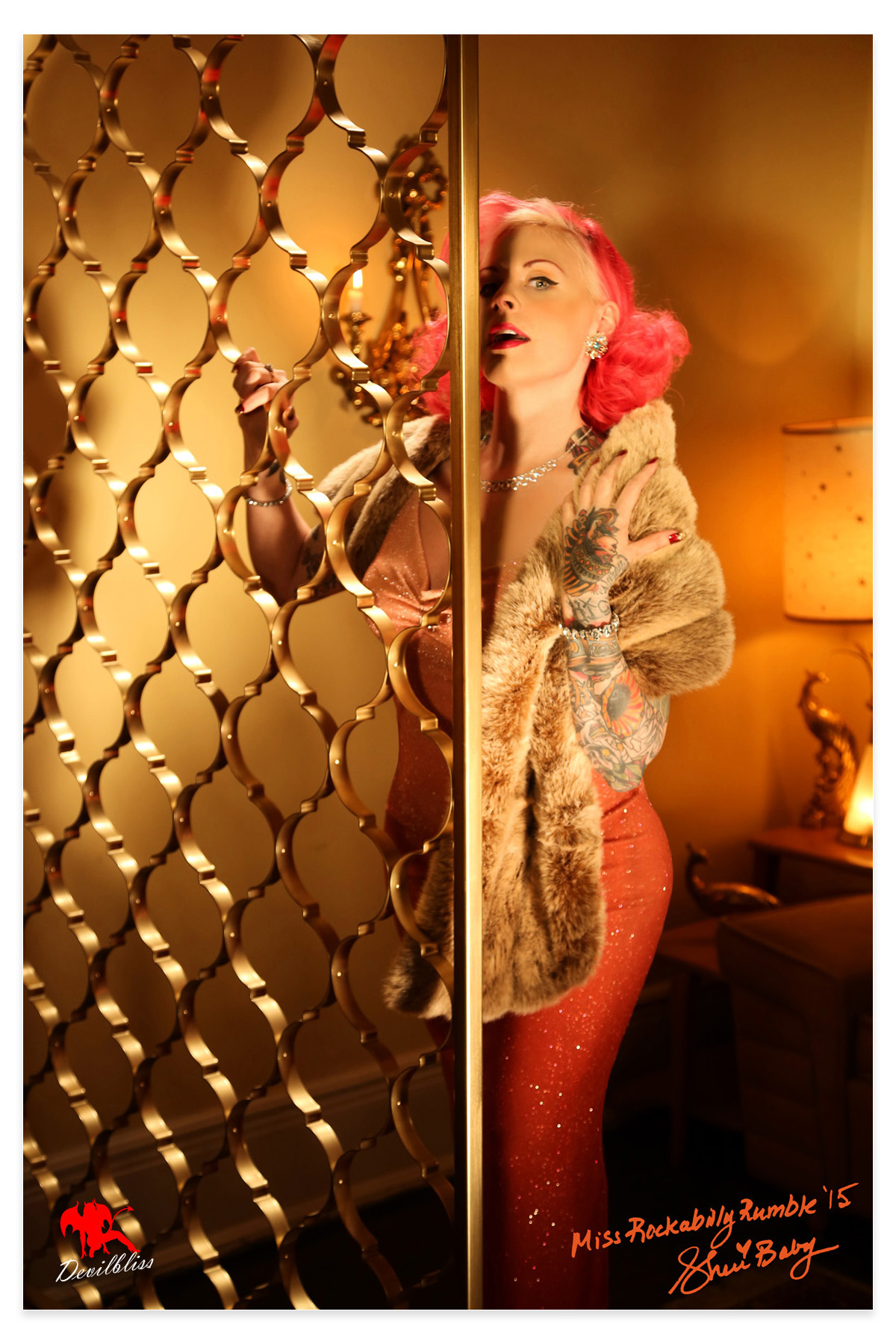 Saturday was the biggest day of the bunch. 6 ladies joined us and again some from states away.

First up was Dottie Mae Divine. Dottie took part in our first Classics Recreated session and turned in some adorable re-creations. It was nice to have her back for this more glamorous theme. She was like a different lady!

Next we had one of our favorite Latinas from New York City visit us and I am always amazed at her transformation. You can even see this in the two examples here, the first with such an elegant look contrasted against the feline temptress of the second outfit she chose (all from our collection in the studio). 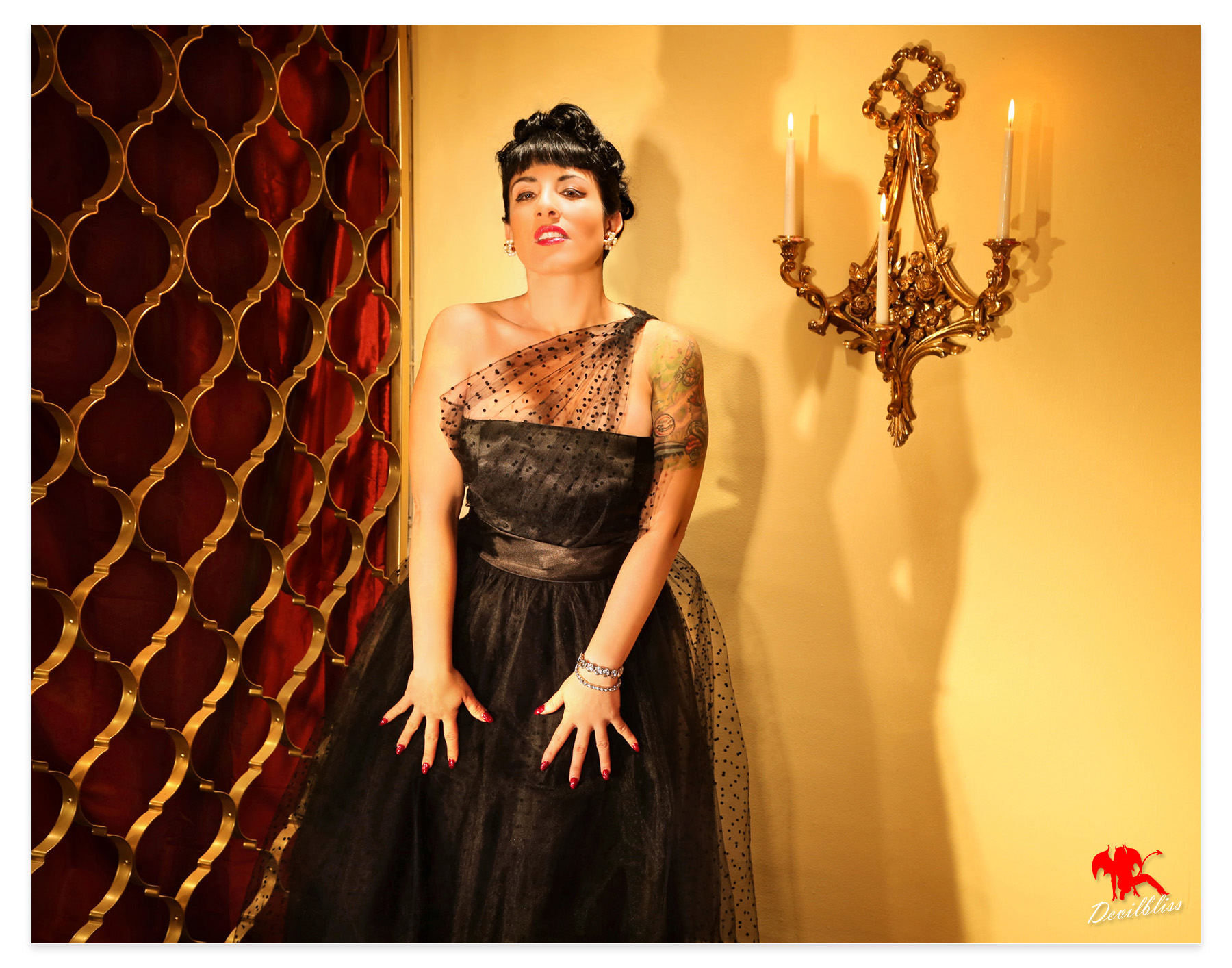 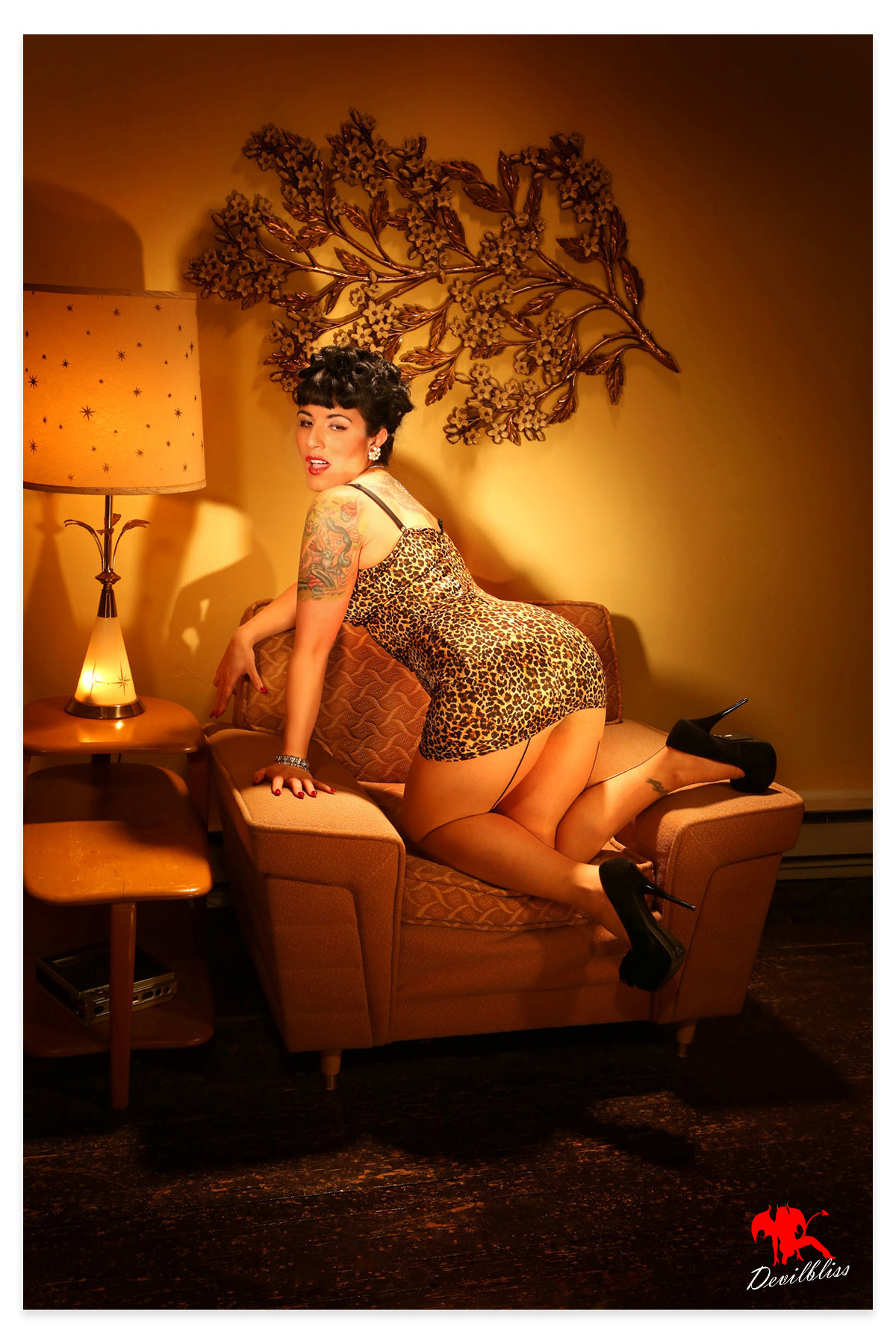 Next we had another first-timer. Ruby Red. She opted to pay homage to I Love Lucy and the dress and apron combo certainly pulled that together.  She too was nervous but that quickly passed.

Our next client was another first timer. She too claimed to be nervous but it sure didn’t show. Joline is a friend of another repeat client of ours Devyn Dixon Pinup. Joline told me Devyn talked us up so much she did feel a level of comfort she might not have had walking into someplace completely foreign. What I like about her session is that her look was not decidedly “pinup”. Yet her styling and wardrobe were no less spectacular in this setting. 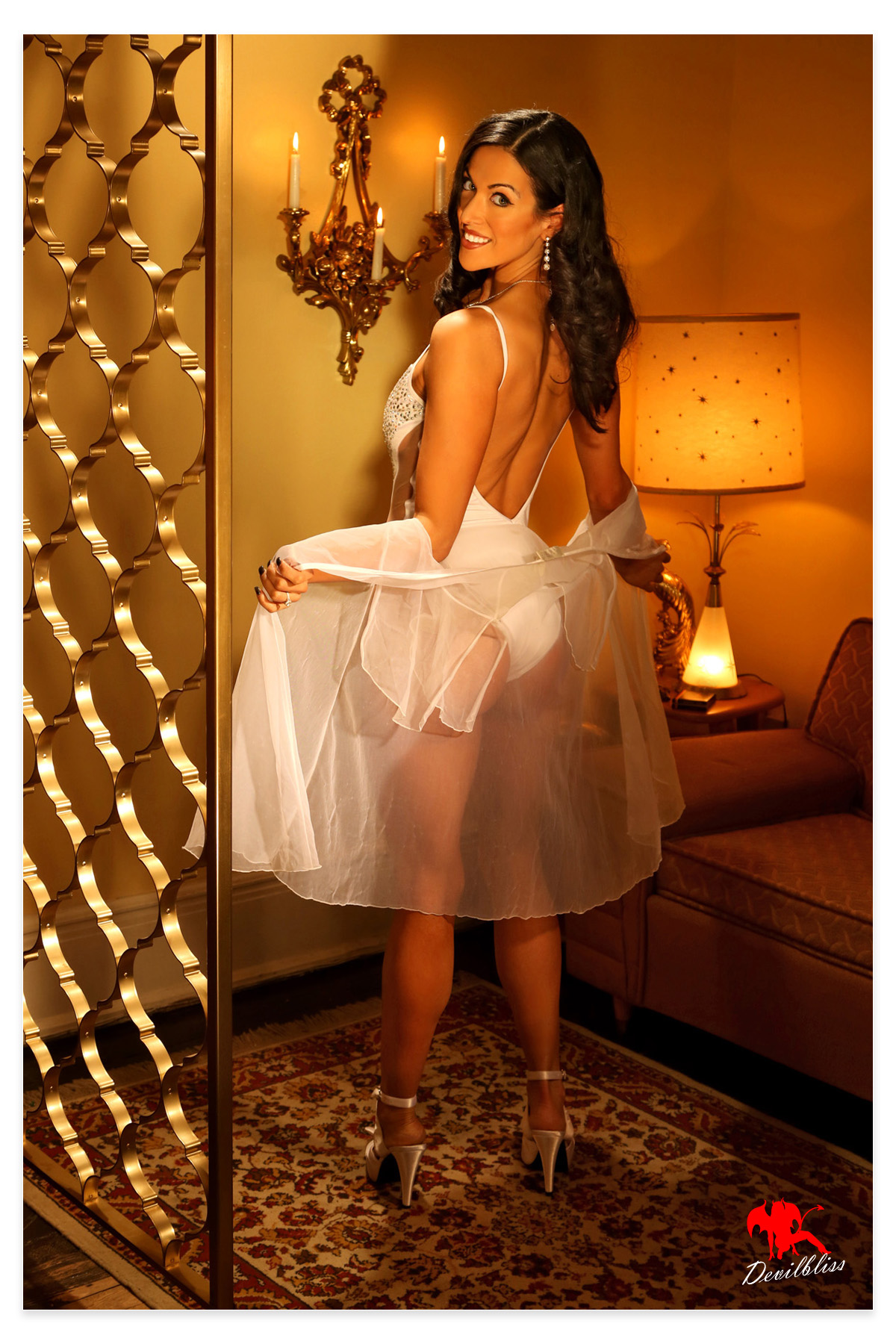 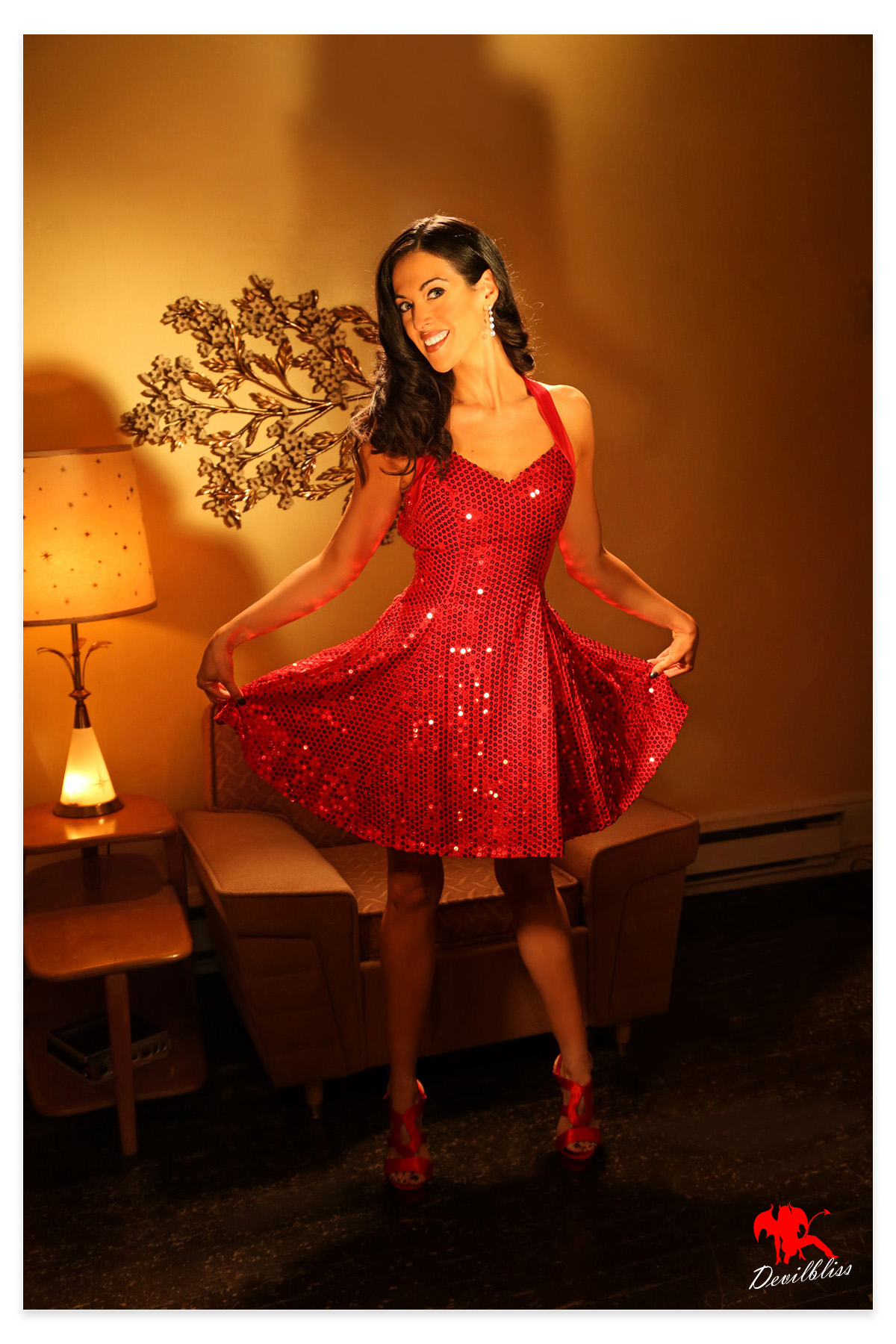 Sunday we still had 5 sessions and kicked off with a gal we shot some time ago, Kara Kupcake. Kara is quite animated and has one of the biggest smiles and contagious laughs you’ll find. Again it was like a party catching up with old friends, oh and photos too…  Even though the Old Hollywood sessions are themed for black and white I still edit and shoot in full color and provide both versions. A bit of a bonus really. But seriously, the color shots are so rich, you just can’t not share them too. 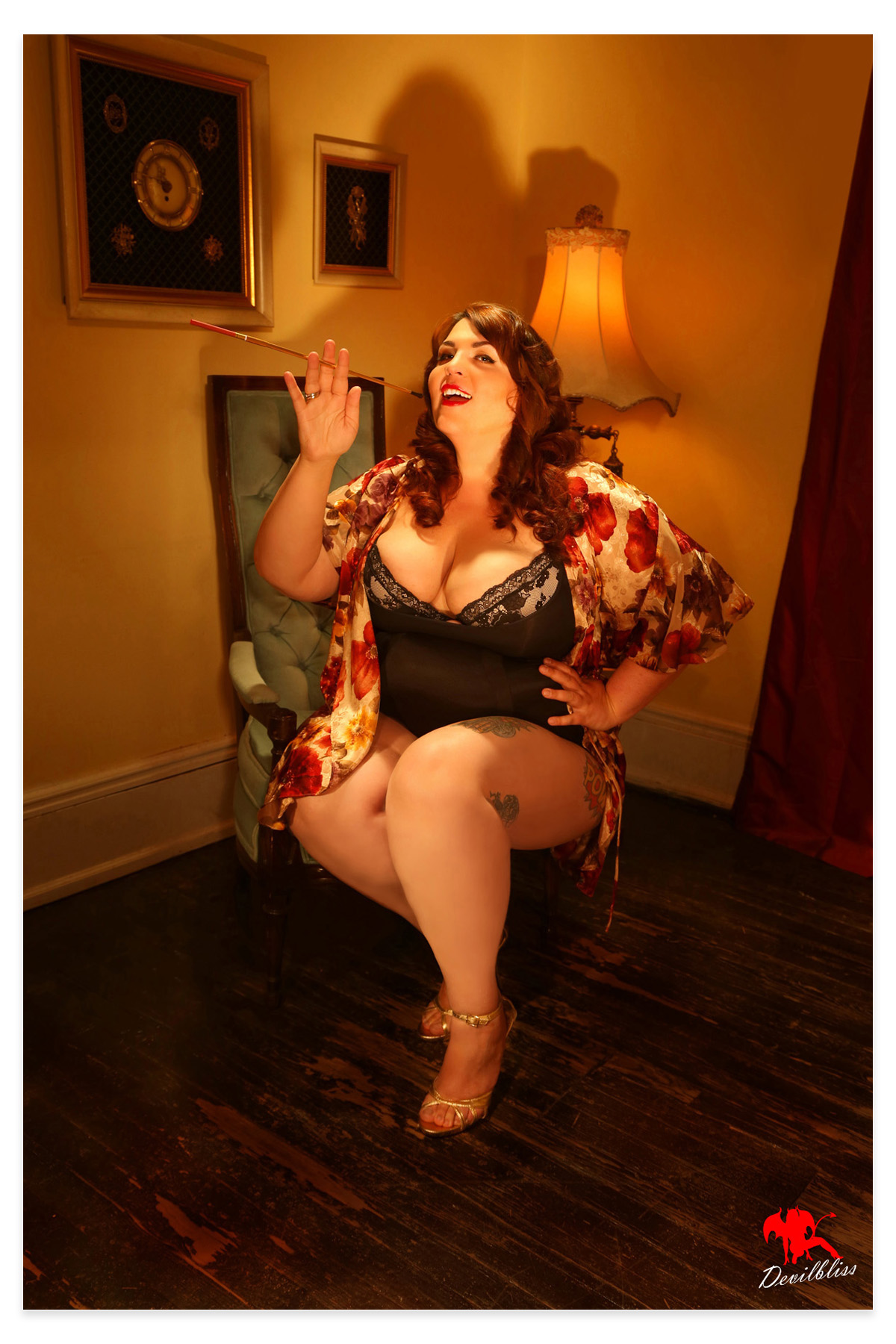 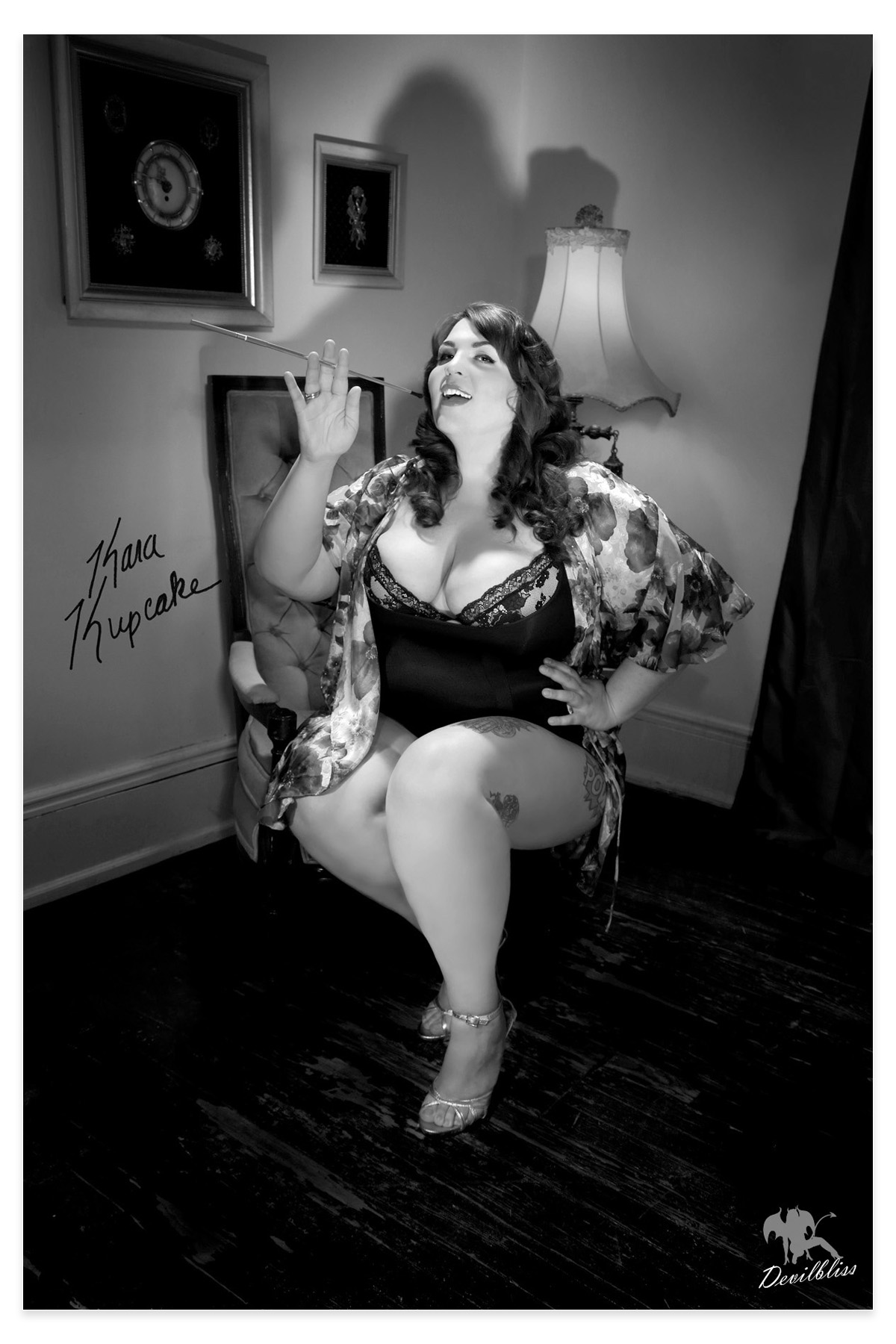 Next up we had a gal who recently shot with us, in fact she was one of the first models to take part in sessions in our new 2000 sq. ft. studio. Ki Ki Vengeance also attended our open house last week which permitted her to pick up her “I’m a Devilbliss Girl to shirt”. I have to admit I was really excited to see her walking into the studio wearing it!!!  You rock lady!!! 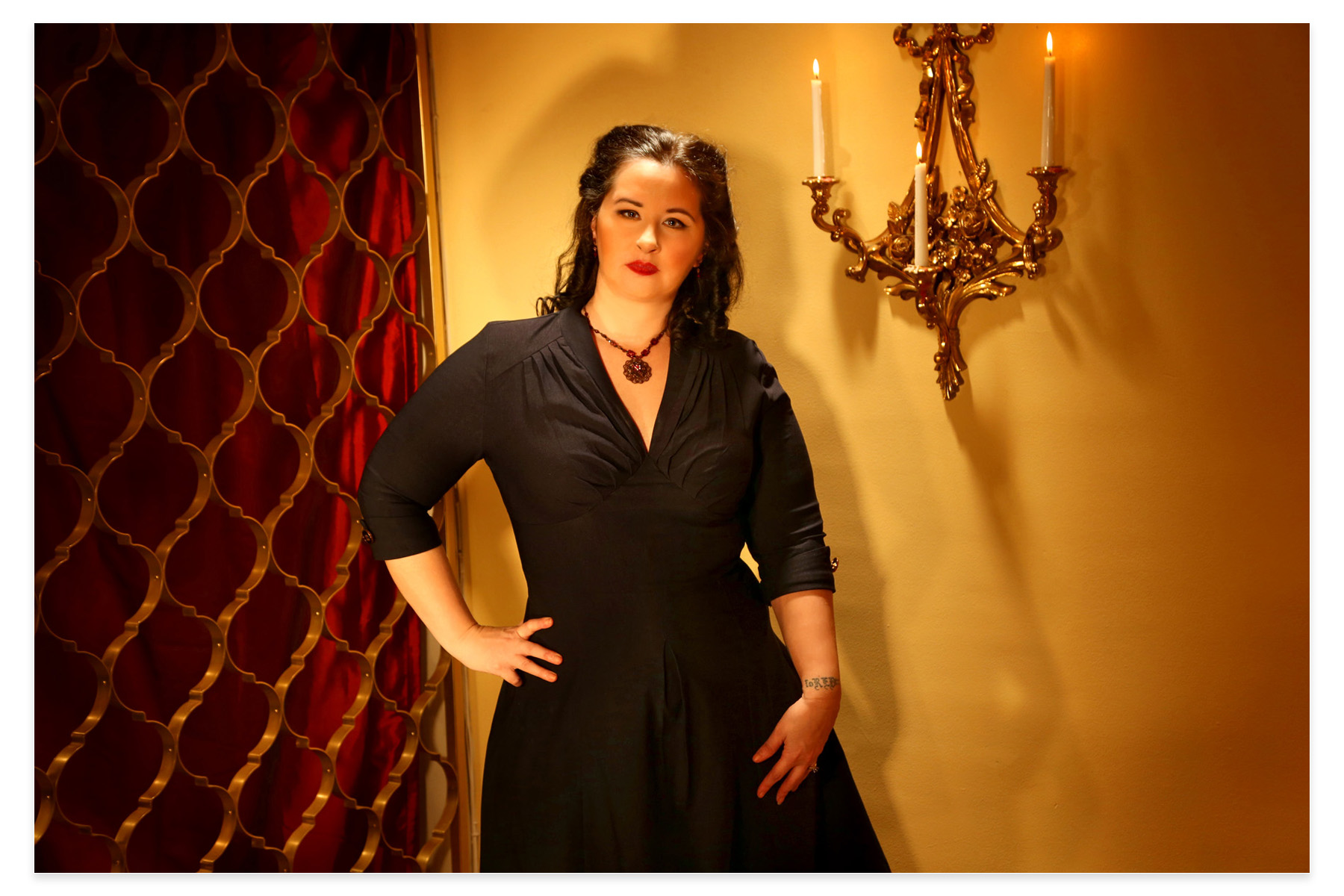 Our next to last client came from nearby Berwick PA. Kaye Von Davis stopped by the old studio last year while some friends of hers were there. She immediately took to my furniture collection and I learned she has an affinity for the stuff as well. We had a great conversation and then later, the day after Pinup Prom 2015 she and her guy and quite a few others met up at a shop where I get a lot of my items. Some weeks later I became kinda obsessed with Schaeffer Beer… recalling how they had a brewery outside Allentown PA (later owned by Stroh’s and now Sam Adams) well anyway, I learned someone was brewing it again and on the website searched for distributors… the closest listed was in Berwick PA…  so I sent Kaye a message asking her if she knew of the distributor … of course she did. About a week or so after that I met up with her and her family at an auction near my home and had a fresh case of Schaeffer in the back of my car. It nearly felt like being a rum-runner or something. So all this long winded build up for this, as she was with Nicole in makeup I ducked into the dressing room where some remnants of the Open House we just had were and proceeded to offer her a Schaeffer Beer on the antique Schaeffer Beer tray I just got at a shop Ki Ki Vengeance (above) turned me on to. How wild is that? So I am posting a few shots of Kaye here because they’re pretty swell, and not coincidentally so is Kaye. 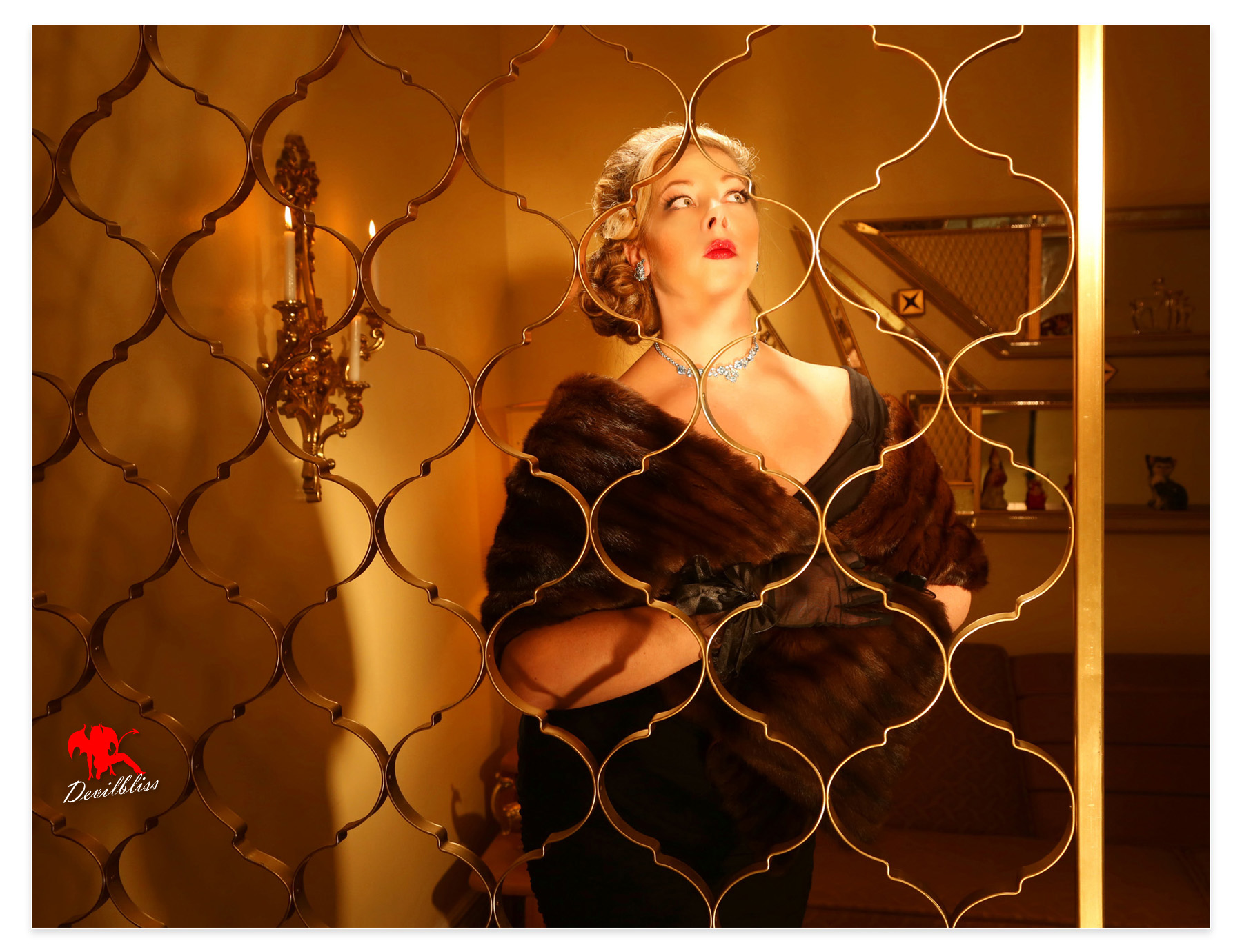 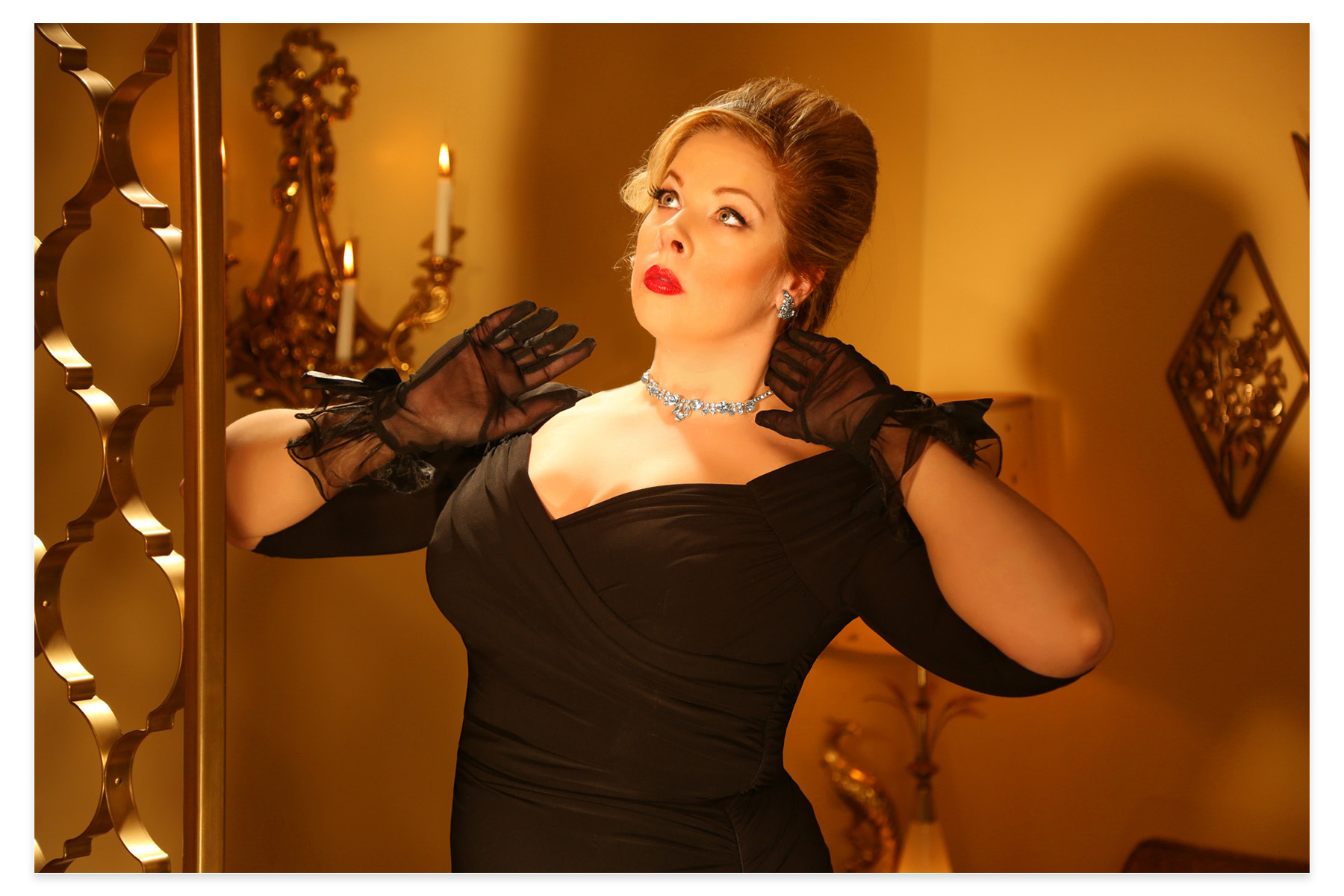 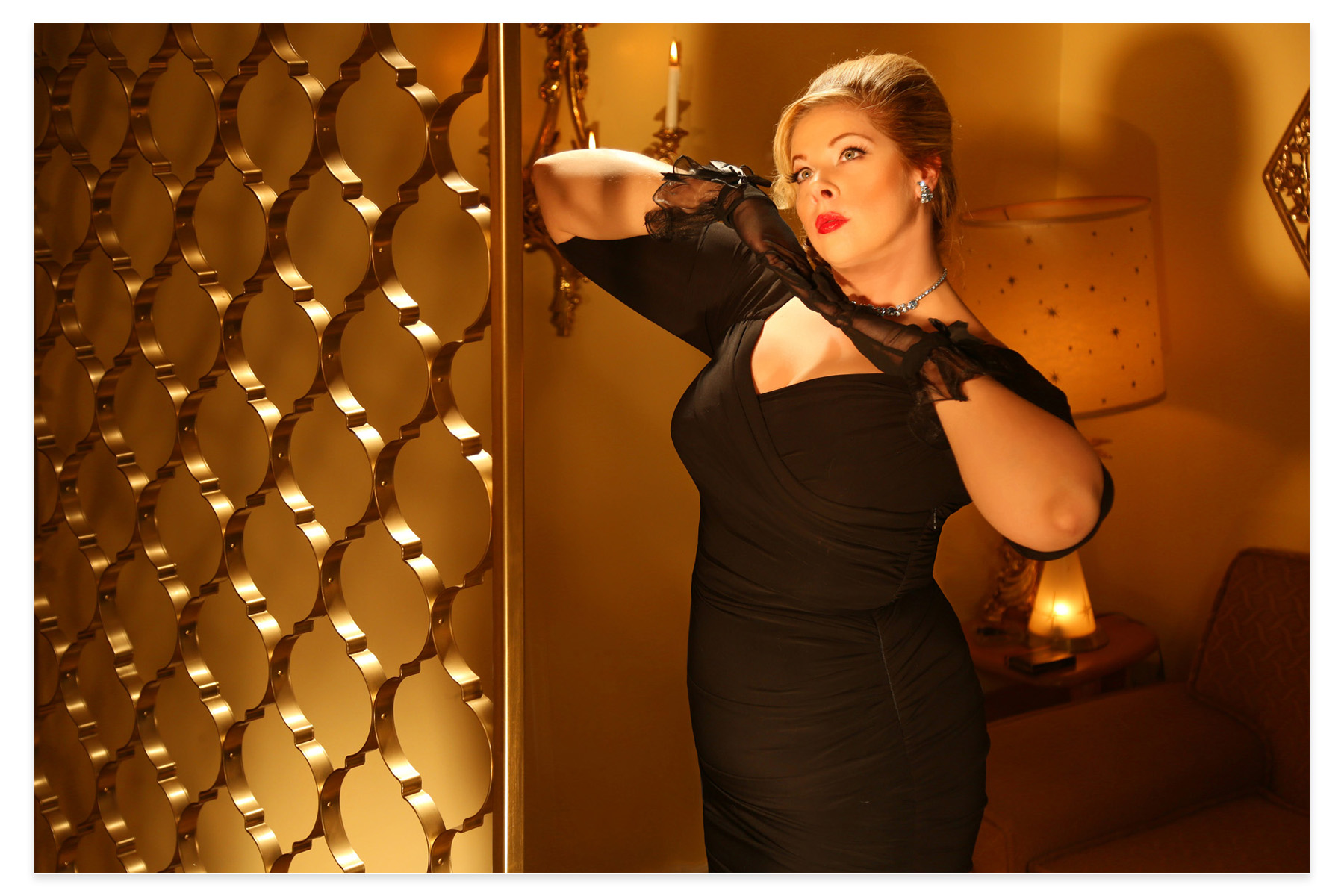 And last but not least we have The Batlady! I love this shot because I was telling her how in Studio-C we have a photo of Steve  Buscemi on the ceiling that I ask people to look up and laugh at. Something about that head position, the eyes looking up. Batlady and I were discussing furniture because she has some fine pieces herself. I am still not sure if I forgive her for painting a vintage shadowbox all black, then again in my youth I did that to an old cabinet radio. Another interesting point. This was the first time I shot Batlady, but Nicole has worked with her before and as a matter of fact once at my old studio, Shangri La for the visiting photographer Va Va Voom who was in from Florida shooting at my place. 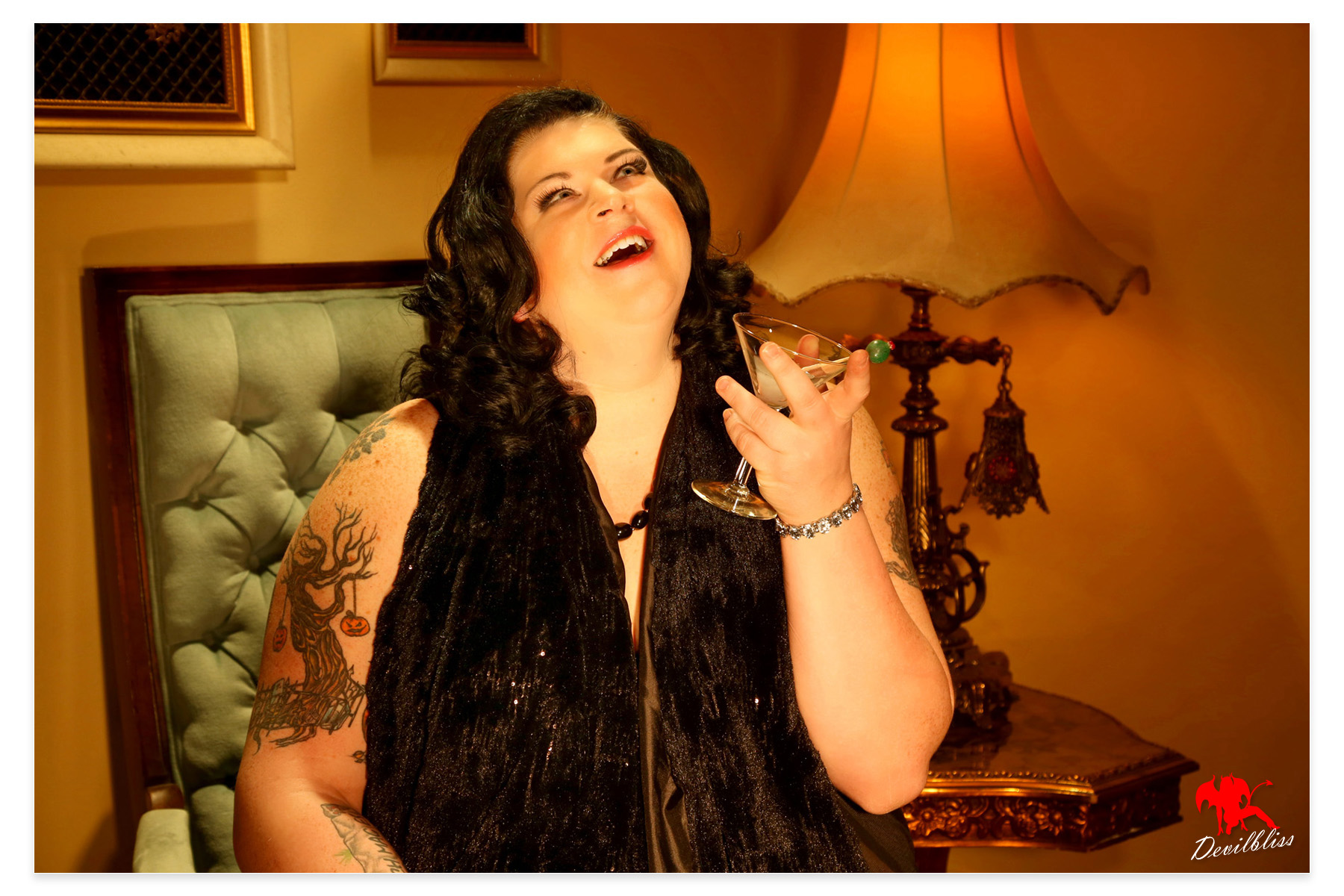 SO, I hope you enjoyed this peek into several busy days in the studio. If it’s something you’ve been thinking about, don’t wait, you have no idea what you are missing out on. There’s a lot of community at work here and if you want to stick your toes into that a bit, send us a message on FB and we’ll point you to a group that’s been started that might help you decide it’s time to do a shoot of your own.