Miss Frankie Eleanor from NYC joined us at Old Sled Works Sunday with 8 other great ladies for a full day shooting in an amazing location that features a vintage soda fountain and vintage arcade. If you have never been there make it a point to change that. It’s a wonderful antique co-op and so much more. Owner, Jimmy Rosen has hosted me several times now and is always amazing with his support of what we do and the pinup community.

Frankie got the distinction of having driven the furthest for the shoot at just over 3 hours. Frankie loves getting shots with us during her shoots. We do too! 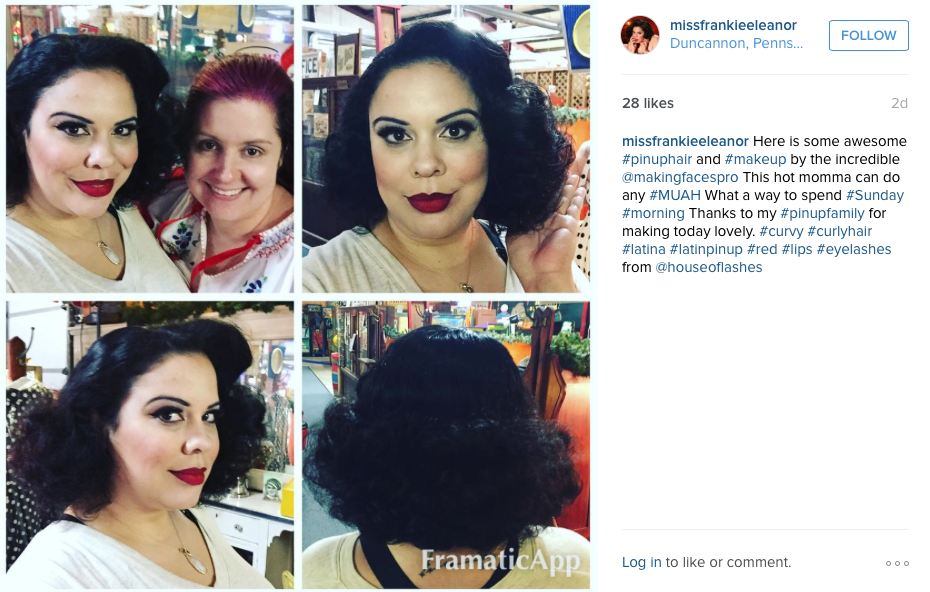 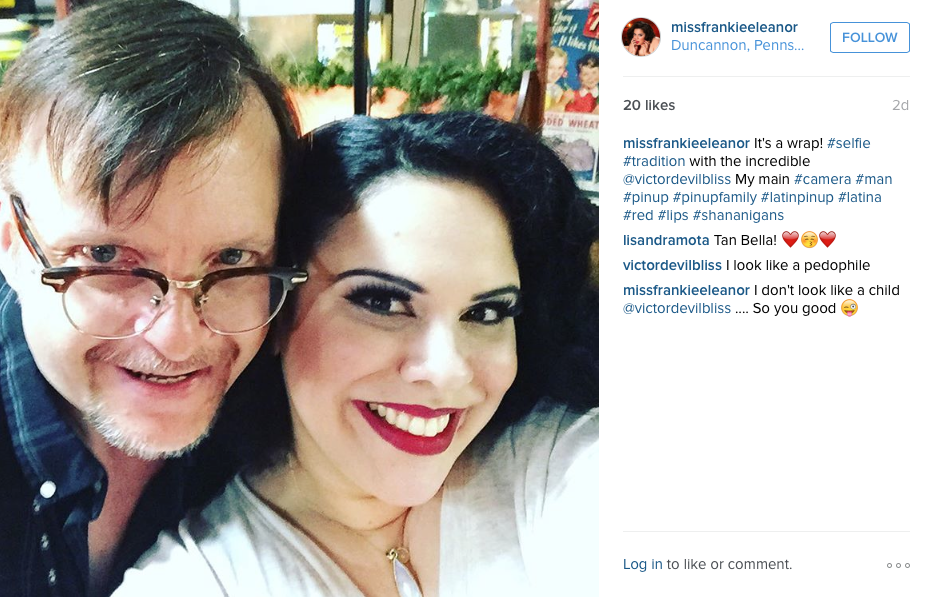 Below is one of several hundred photos we shot at Old Sled Works. Click for a larger view.

Yesterday Frankie came for one of our private D’Lish sessions.  I love this because it contrasts the types of sessions we offer. One where we have a theme, location or special where we will shoot as many people in the course of the day who want to, the other a private one on one session where we will shoot one person for as long as they want to. No joke, I’ll shoot until you drop.

So yesterday I arrived at the studio early, actually I did a drive by first on the way to my parking spot a few blocks away… as I walked down to Centre Street and began to approach the studio I spied Frankie on the sidewalk, she herself arrived just after me. She crossed the street drawn to the promise of fresh coffee at Sage on the opposite corner from the studio and I joined her walking in. She decided to grab something to eat and ordered a breakfast to go. The woman said it would be 15 minutes or so and with that we elected to go and grab Frankie’s stuff to bring into the studio.  Within moments Nicole of Making Faces Professional arrived and it was the usual explosion of hugs, laughs and conversations that tend to be the norm, and especially with Frankie. I ran to my editing area for some routine work and several minutes later ran back to pick up Frankie’s breakfast for her and arrived just after it was coming off the grill. Later Frankie would grade it adequate, to which I noted after having coffee at Sage I would label it similarly. After about an hour and a half in styling we were ready to shoot. We began in our boudoir / dressing room setting for the first part of the session. At the point Frankie actually began to put on the Boudoir By D’Lish robe her face lit up like a child at Christmas. It’s an amazing piece and easy to see how Catherine D’Lish became a costumer for Dita Von Teese. 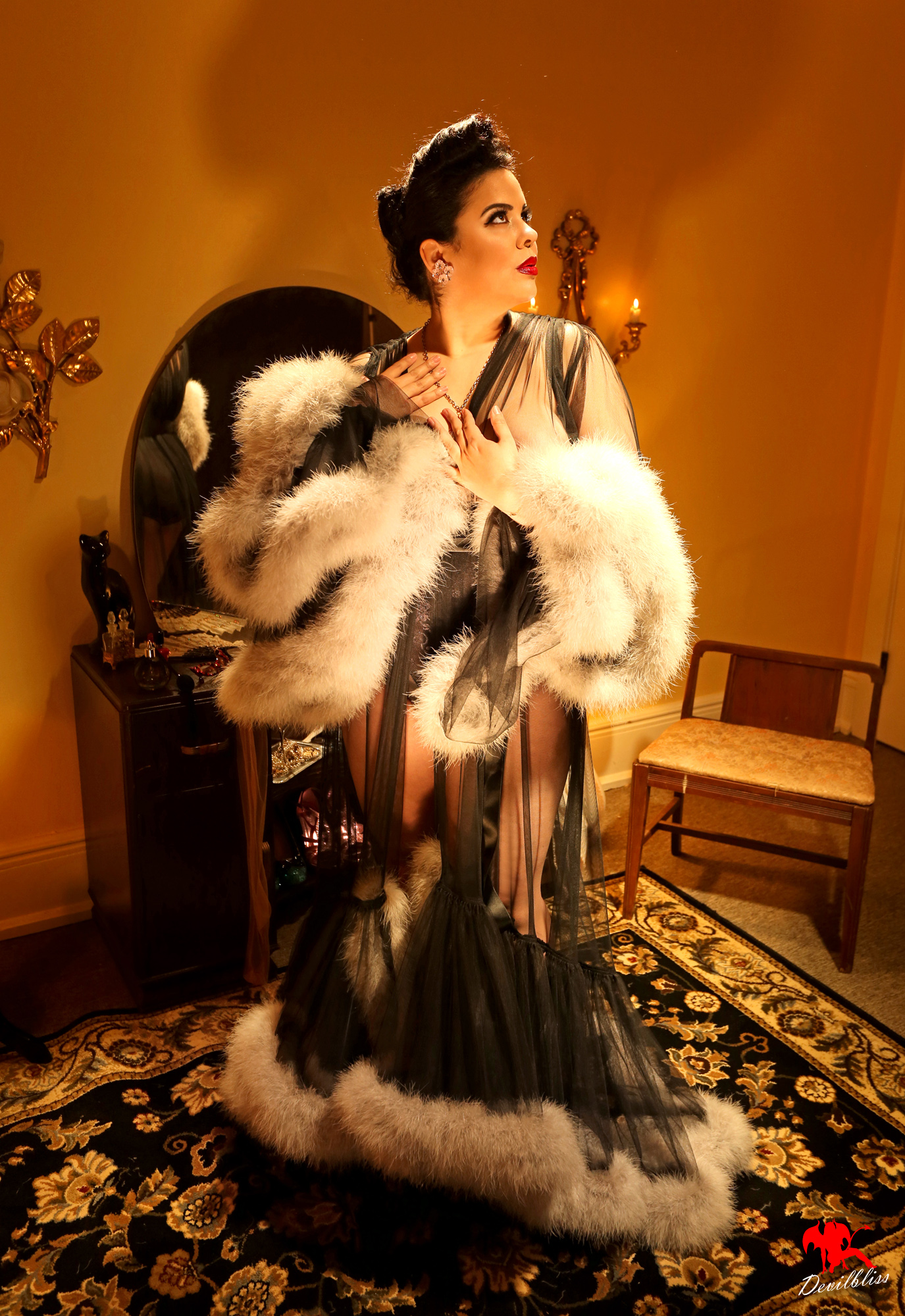 Frankie requested something new for her second look. Something I applauded enthusiastically. A few weeks earlier she noticed a sample photo I posted of a new space I had prepared on our second floor.

That area is not a “finished” space. Honestly I secured it as a storage area from the new property owner. It seems some years ago an adjacent building had a small fire that did spread to the roof of the building we are in. It was very light but the fire company still had to enter this building and pull down ceiling in each room of the third floor to inspect. The owner at that time did not elect to make repairs to that floor and basically wrote it off. So it’s a big space, with some offices and rooms that are empty and affected by this history. But for storage alone it had value to us. For me, with a history and a love of the unusual my mind still saw photographic possibilities. In my eyes it’s a wonderland of the unusual,
The Curiosities. It was one of those very rooms and settings I posted and indicated a series of sessions called “Curiosities”. 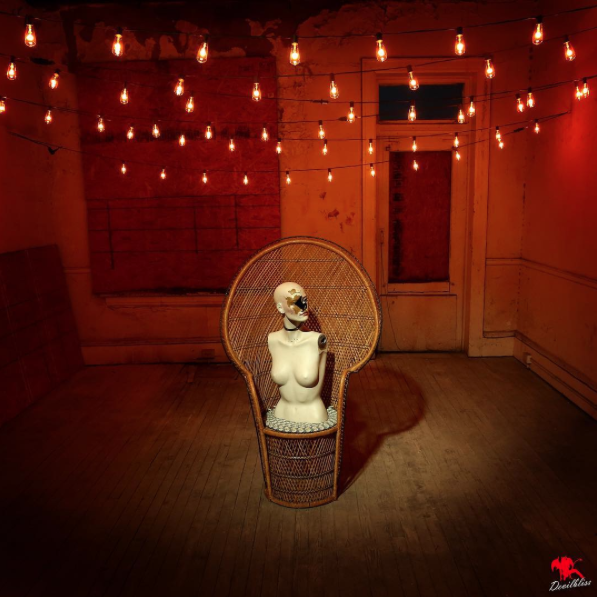 So… This is what Frankie wanted. The juxtaposition of this stunning new robe in a distressed and curious setting. MUCH YES!!!

After hauling up lighting and stands and photo gear I had Frankie stand in, sans robe, to do some lighting tests. Several times I asked her “let me try something” and before too long I felt I was ready to begin. She donned the robe and we started. After a few minutes I asked if I could try something else, she obliged and yet what I thought might be interesting in practice had some issues and I shelved that idea.  Another thought struck me and again I asked her if she was game to try something, and she was, which then had me light up some charcoal with which to burn some frankincense I had on hand, it produces a lovely smoke, different than dry ice or a smoke machine. After a few clicks I knew the photos would be quite striking. See for yourself: Click them to see larger versions you can zoom in on. It’s kinda magical I think. 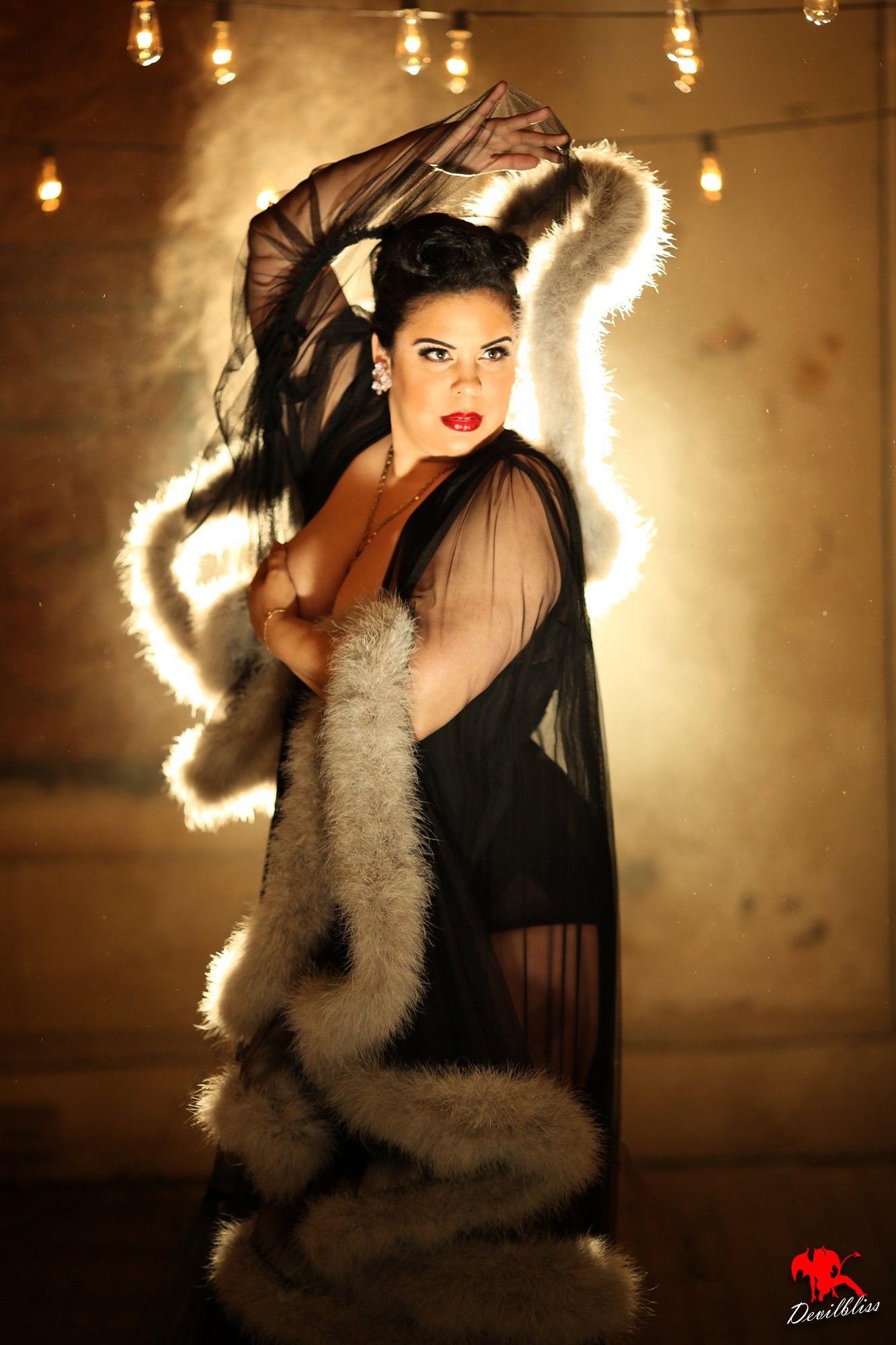 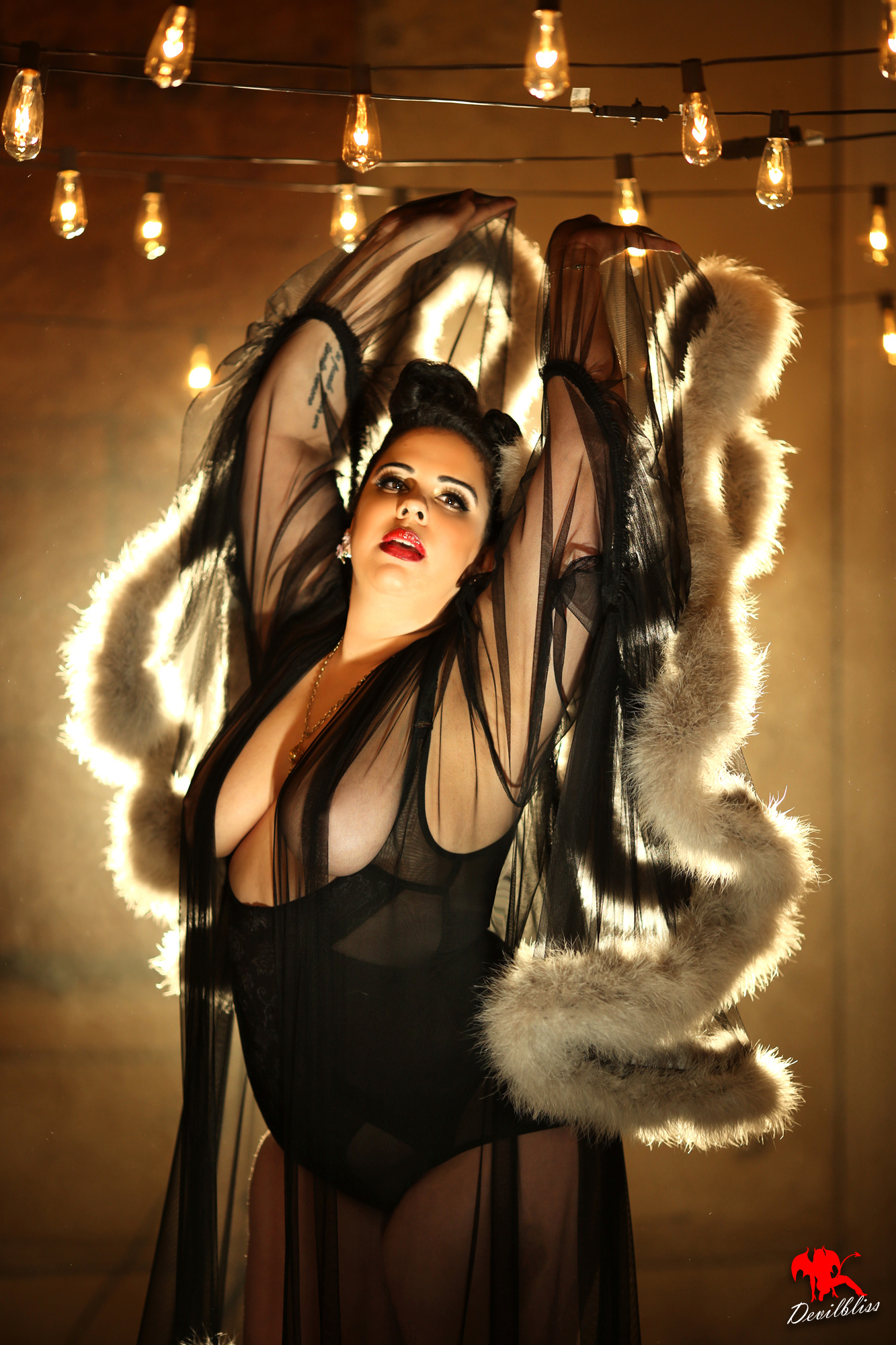 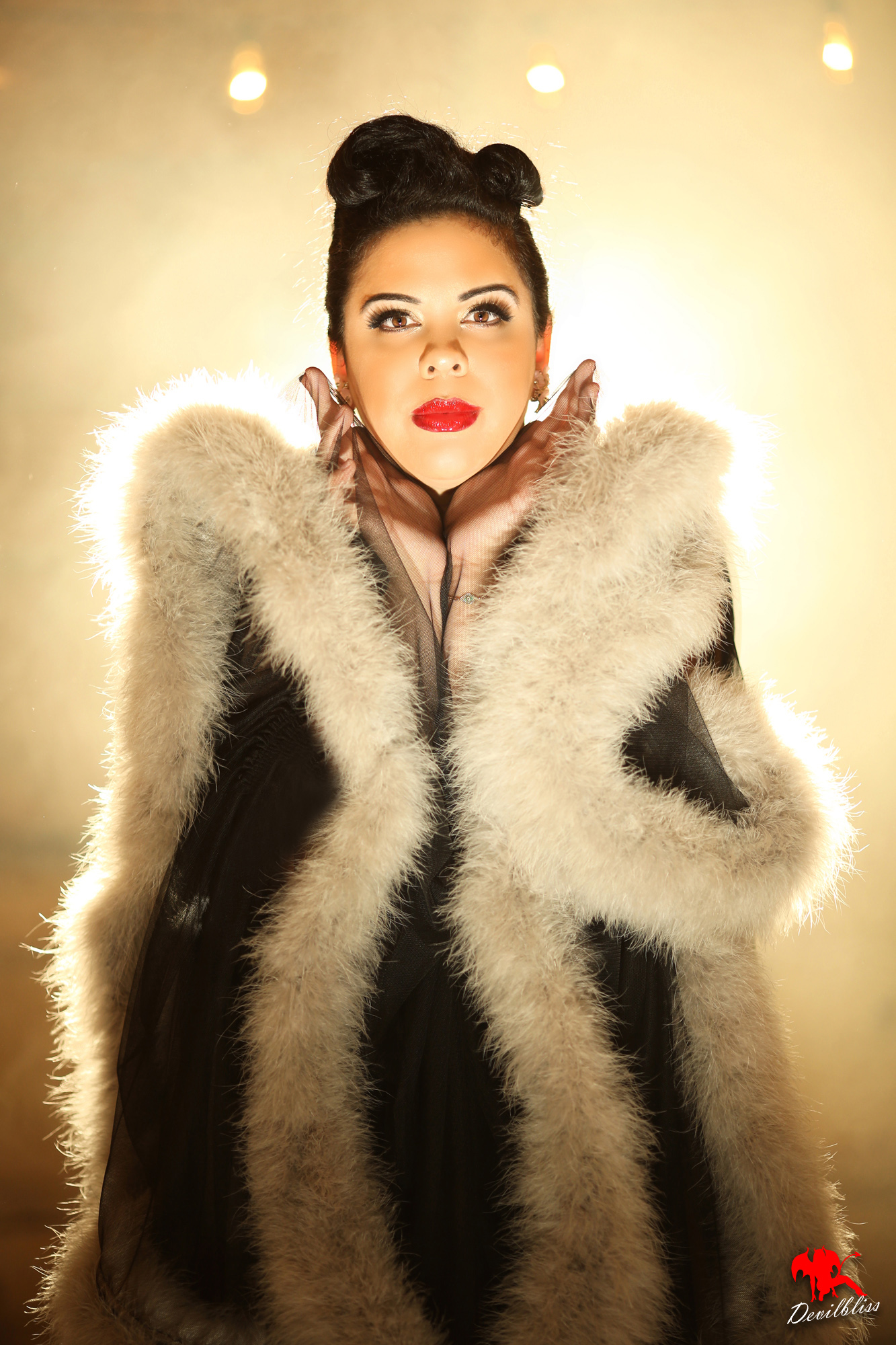 This shot is un-edited, simply cropped. It was Frankie’s idea to throw out the sleeves from the robe. We staged and I shot high speed to capture as many frames as my camera and lights could manage. 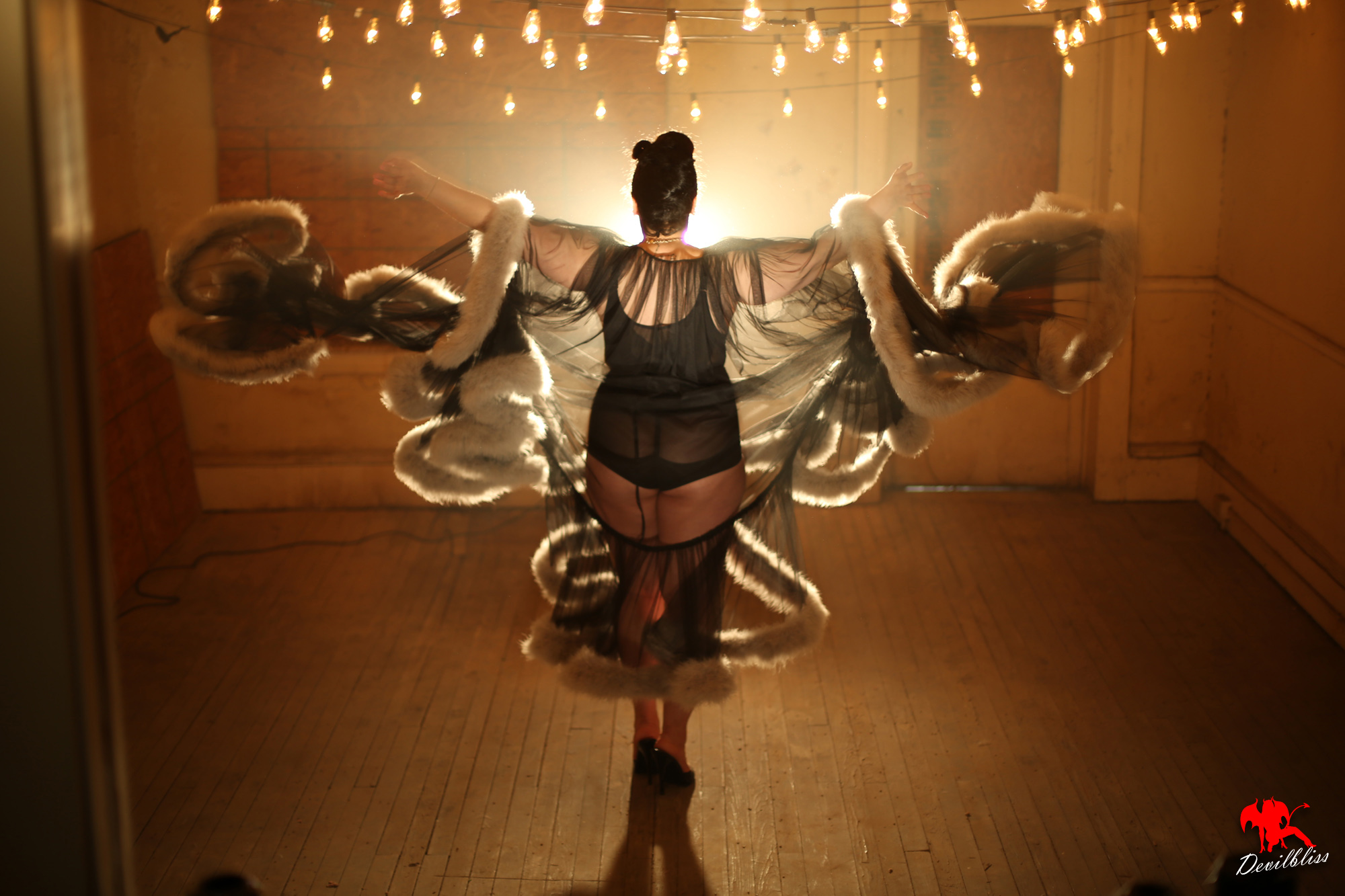 When we finished shooting, Frankie got out of her wardrobe as I went to my editing area to download the files. When we were at Old Sled Works I asked Frankie how much time she had for this session and she said “however long we need” to which I asked “can you stay and we can go through your photos and pick some for editing?”.   And so that was the plan. When we got to it we began with the Arcade session and then got into the D’Lish photos. I love sitting with a model and going over images. During the process as both of us are looking at images you learn a lot about how someone sees themselves. You feel the pace with which they will see an image and then move on to the next or slow down to study some things. You start to see patterns of what they like for themselves. This is very important to me and I feel important to the service I provide. I always give my clients every single photo shot, even the duds, the blinks, the goofs… every shot. I also have them choose which images they want to be edited. Here’s the thing, just as I sit with someone through the selection process I will often find them prefer images that I might not have selected as a best representation of them and the shoot. If someone wants me to pick what I think is best I will. If they want my opinion I’ll give it. But I want them to have every option to see all their photos and choose what makes them happiest. It’s why I have adopted a slogan of “Your Photos”.  Another aspect of reviewing images with someone is situations like I experienced with Frankie where she came upon a few that she really loved but had reservations about something. Perhaps it was a wrinkle in the clothing or something about the pose that was slightly off. This was an excellent learning opportunity for her as to what is possible with my editing.

On a few shots I immediately opened them and showed her how I could address and correct things in an image that she loved so much but might not have chosen because of some small details not being to her liking. Some of my clients already know this and in their edits will ask if certain things can be corrected. I work for you. I am an artist and there will be times I may have to say “it’s too tricky to look natural” or “that’s possibly going to far” but those instances are few and far between. I edit images to my clients request.
These are “Your Photos” after all.

We finished selections and Frankie was on her way.  She left with all of her images and before she got home I sent her a link to several completed edits. I believe she was still on the road and Catherine D’Lish herself had already commented on one of the images I previewed on Instagram.