Wow. It’s been a crazy few days in the studio. We had multiple sessions all week and ramped up to our Bunny Basket special. We may have actually shot our youngest client ever too. There were kids, adults, moms and daughters. One of our repeat clients Georgia Storm asked if she could also fit in the Milk Bath set for her visit and we were able to accommodate her. 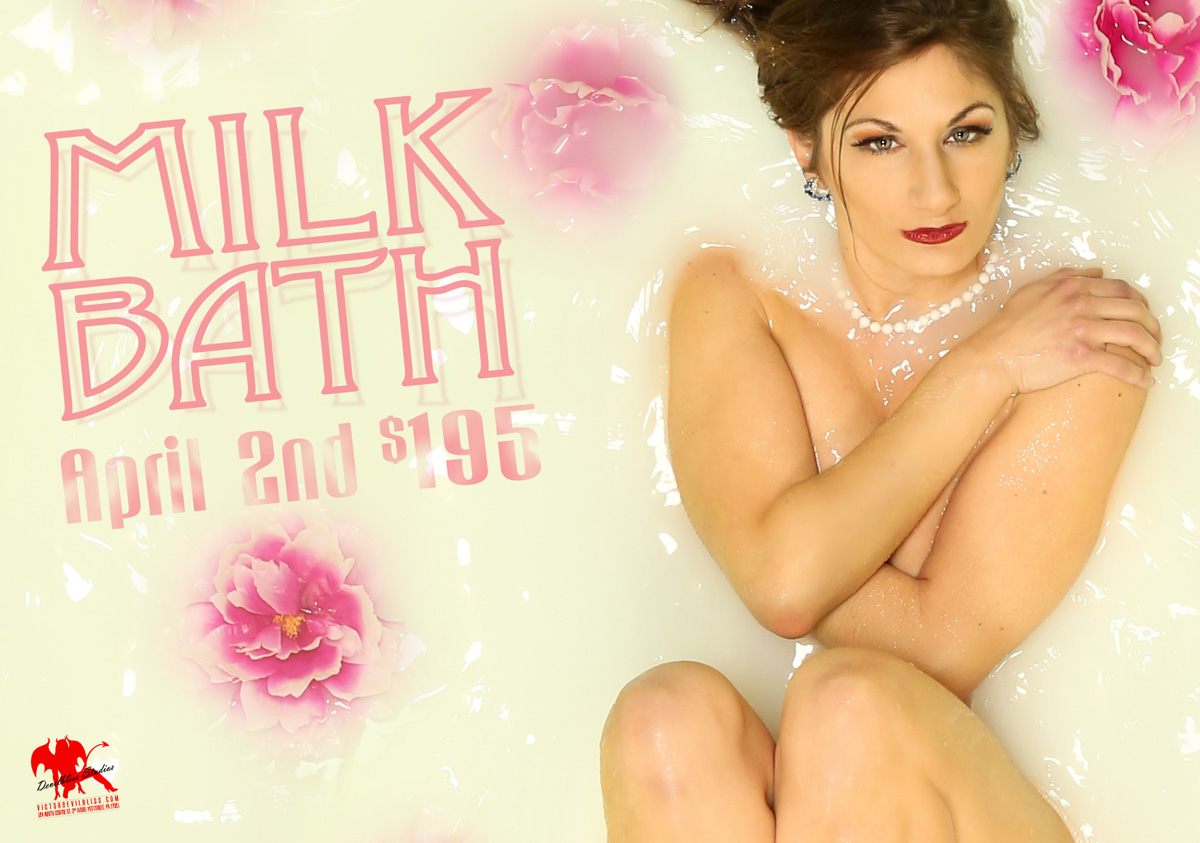 This post is going to jump around a bit since there’s quite a few different things going on. Let’s talk a bit about some changes we’ve made to our shoot schedule. It had been we would announce shoots about 6 weeks prior to their date. Recently we began sharing some earlier due to the fact they were something that we wanted people to have more time to prepare for. As we did this we made the decision to put forth many more shoots much further in advance of their dates. There’s a few reasons for this. For one it gives people more time to prepare. Another is that we don’t want a situation where we announce something and have someone take part and then another session comes along a few months later that the client would have loved even more, something super special for them. We know few of us have unlimited funds to do every single thing we’d like to and tend to do those most important to us, so this ensures this won’t happen. It also lets people take part in our shoot installment plans where if you like, we can set you up to make a deposit on something, then have monthly installments that don’t bite into your budget all at once and arrive at the shoot date either paid in full or nearly so. SO, if you’ve been to our deposit page recently you’ll notice it’s flush with a ton of upcoming shoots. See one you like and need that payment-deposit plan set up? Message us on Facebook and we’ll work with you to make that happen. 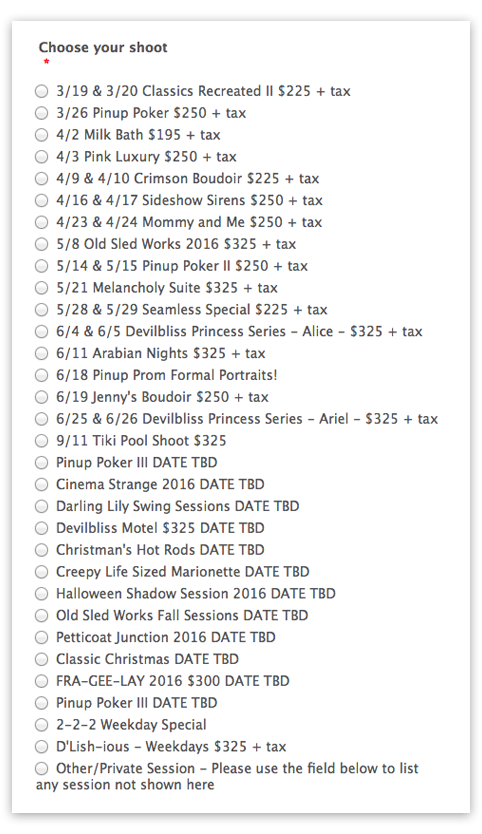 Next are a few shoots that are super noteworthy that you might want to know about. One is at a location that will not exist forever. It’s in an old building that at one time must have been amazing because even in its current state the detailing from decades ago still catches your attention. The space is going to be rehabilitated so it isn’t going to appear as it does indefinitely. I’m calling this session The Melancholy Suite and I have a post here about it 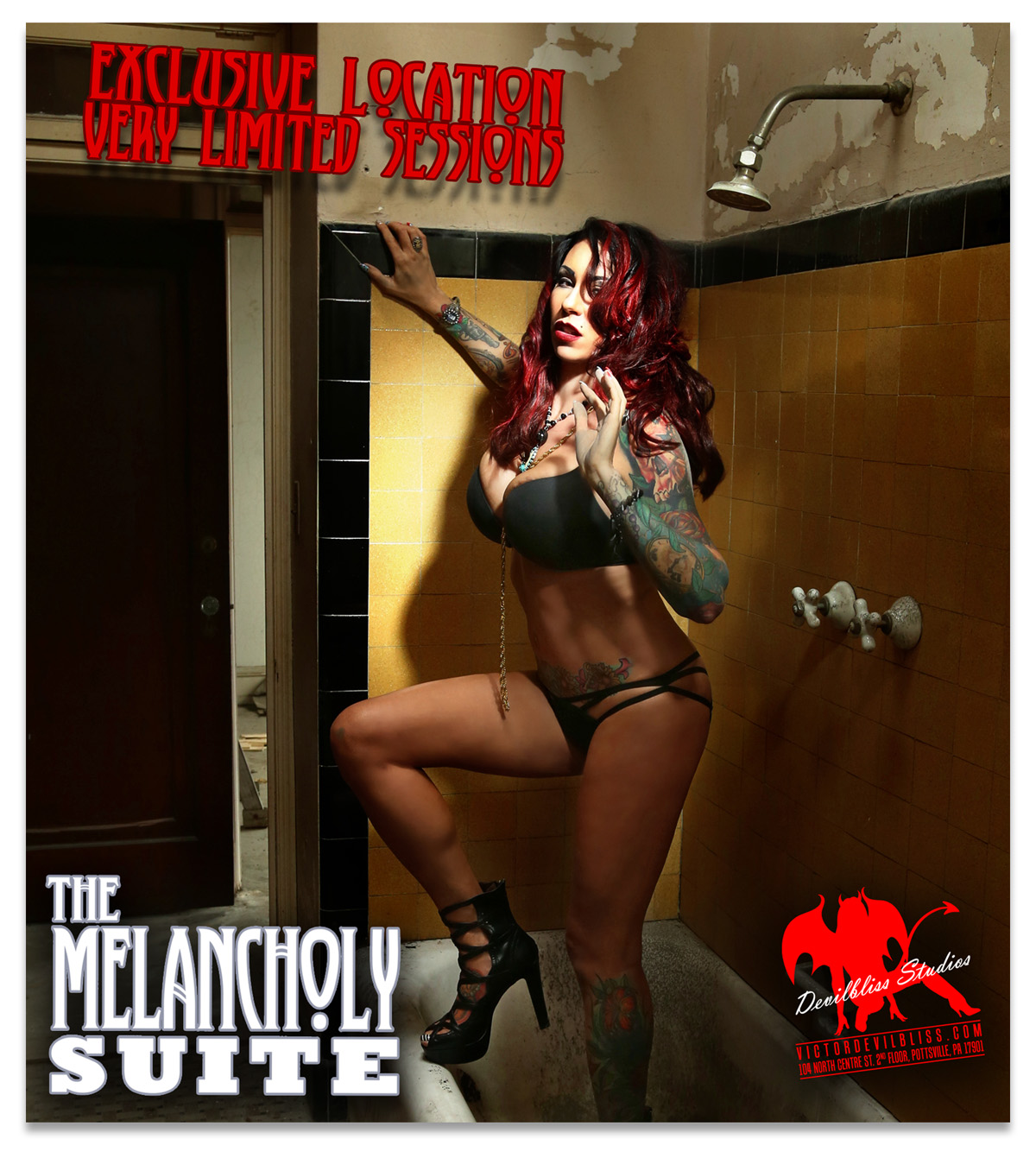 as well as several sample images with model Jenny Jayne (seen here) who was able to do the session early.

The next shoot is nothing short of astonishing. It’s astonishing because the centerpiece, the thing that has made women squeal (online anyway) is an article of wardrobe. Yep, a robe. But no ordinary robe. What we discussed just this morning, then put into motion minutes later is a session with a Boudoir by D’Lish robe/dressing gown.

I won’t get in depth here because I did over here. We are capping these sessions at 20. In less than 2 hours 5 deposits were placed – currently 11 remain. Nearly 50% of the planned sessions sold out simply from a post on the I’m a Devilbliss Girl group page on Facebook. We did not set up an event page, did not send out a newsletter. This one is going to sell out. Do check out the details.

Let’s see, what else?

OH, how about we’re doubling the size of the studio already? 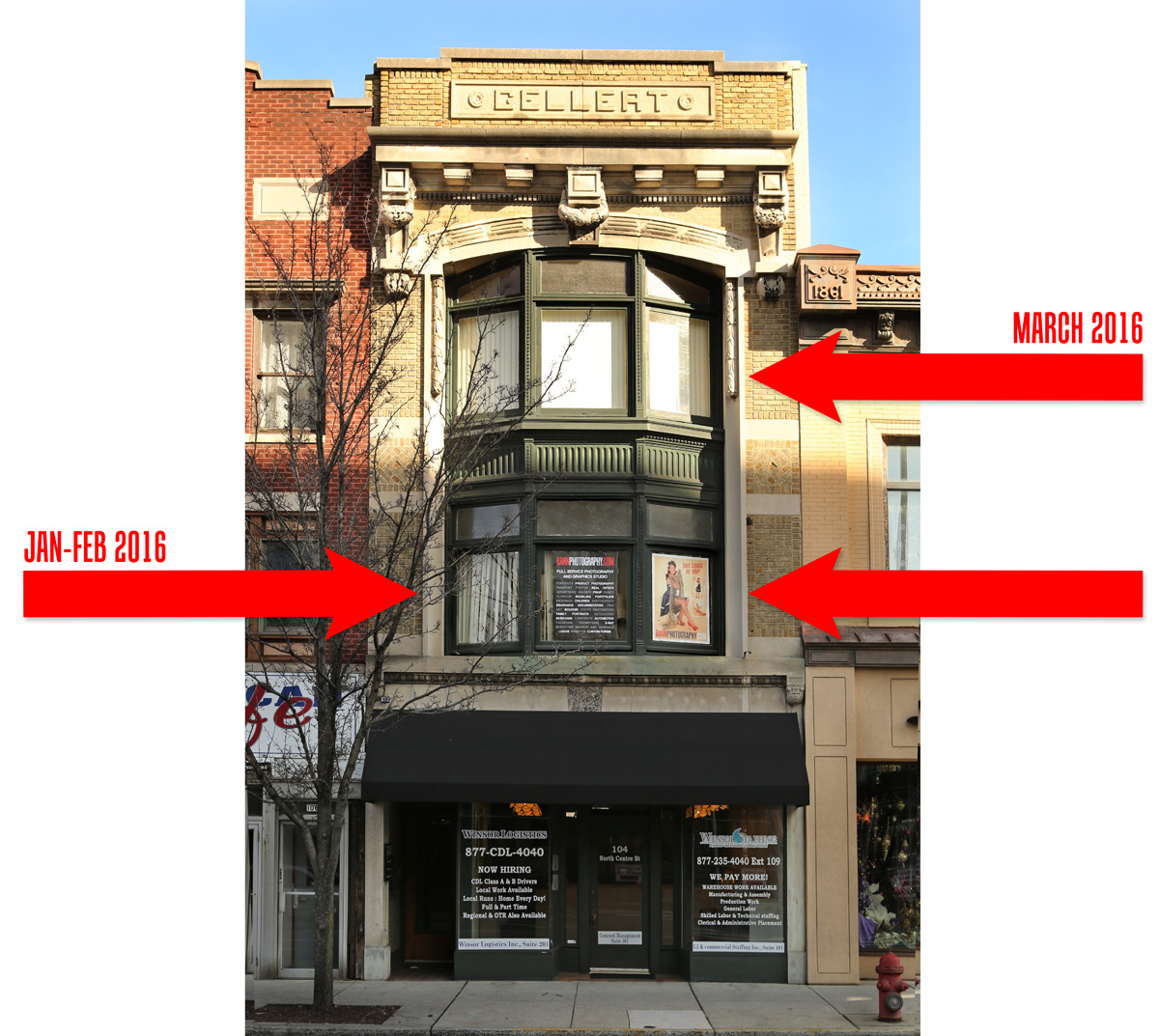 Say what??? Didn’t we just move into a rather spacious and cool new (to us) space in downtown Pottsville PA? Indeed we did and feedback from visitors has been totally amazing. Sometimes things just fall into place and opportunities present themselves. So when we took over the entire second floor ( an already impressive 2000 square feet) at 104 North Centre Street in Pottsville we were aware that the access to the third floor of the building shared a common area with ours. It means that if the building owner had a tenant for that third floor, they’d pass through an area adjacent to several of our studios/rooms. So this was something we were concerned about until we realized the top floor is not in a finished state. I have chatted with the owner several times on many things, he’s a great guy, I actually just did some photography and graphics/marketing for him on another property he recently added to his collection, anyway…. The one day I was asking him about his plans for the third floor and it was confirmed that it’s way down on his priority list. So…. then I asked him about my adding it to our space. If nothing more than for a storage area right at the top of the stairs. This was something of a pressing need because as we are adding adding adding to props and sets it’s already painfully obvious our current prop room will be bursting at the seams in short order. My lamp collection alone occupies a good space. Another thing is that on the 3rd floor there is actually several architectural details in place that would permit us to do some sessions there as well. There’s a room (the future Studio F) which will serve as the Devilbliss Motel as well as being a ready-made office setting, Devilbliss Detective Agency anyone?

There’s a door with a letter slot on it for crying out loud! There’s also some real big spaces too. There’s a few unobstructed by hallways or stairs and at first I didn’t pay attention to why they felt so  much bigger but then it hit me, where the 2nd floor has these awesome 10 foot ceilings (covered in original tin tiles that so many people fall in love with) the third floor towers higher still. I measured them at 12’. That’s permits some truly flexible things to happen. For instance, a session I have been wanting to do is based on marionettes. Now I have seen plenty of photos of people with strings running from their arms and legs up above them like they are puppets, but what I really want to do is a creepy marionette session where the model not only has those strings appearing like they are suspended but also actually build and show a life-sized marionette paddle above them. This space and those 12′ ceilings will permit this to happen like my mind’s eye is seeing it. In a way you just couldn’t do easily otherwise. 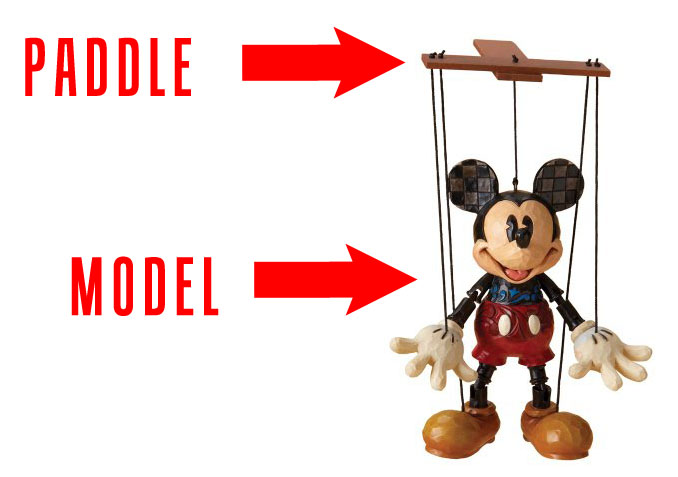 I will need a bigger ladder though and a much larger photo of Steve Buscemi (one resides on the ceiling of our main room, it’s for people to look up at and laugh, which is a great pose).

Here’s what will be our new floor plans in time: 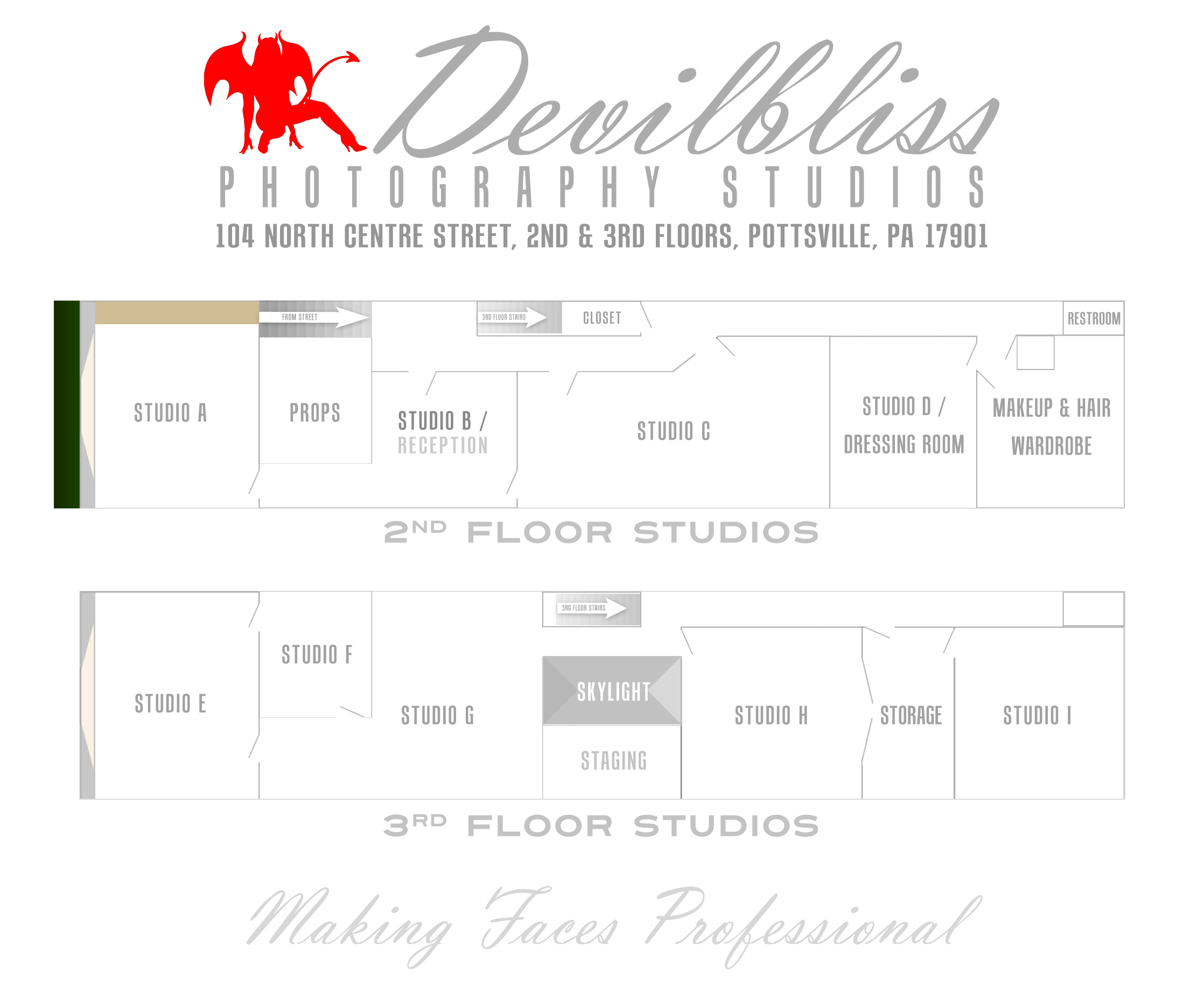 I’d gotten an email from our landlord yesterday confirming we would be adding the 3rd floor just as our friend Miss V was here for a Bunny Basket session, I asked her if she had time for a quick and impromptu shoot in between what will be Studio H and the new storage area. 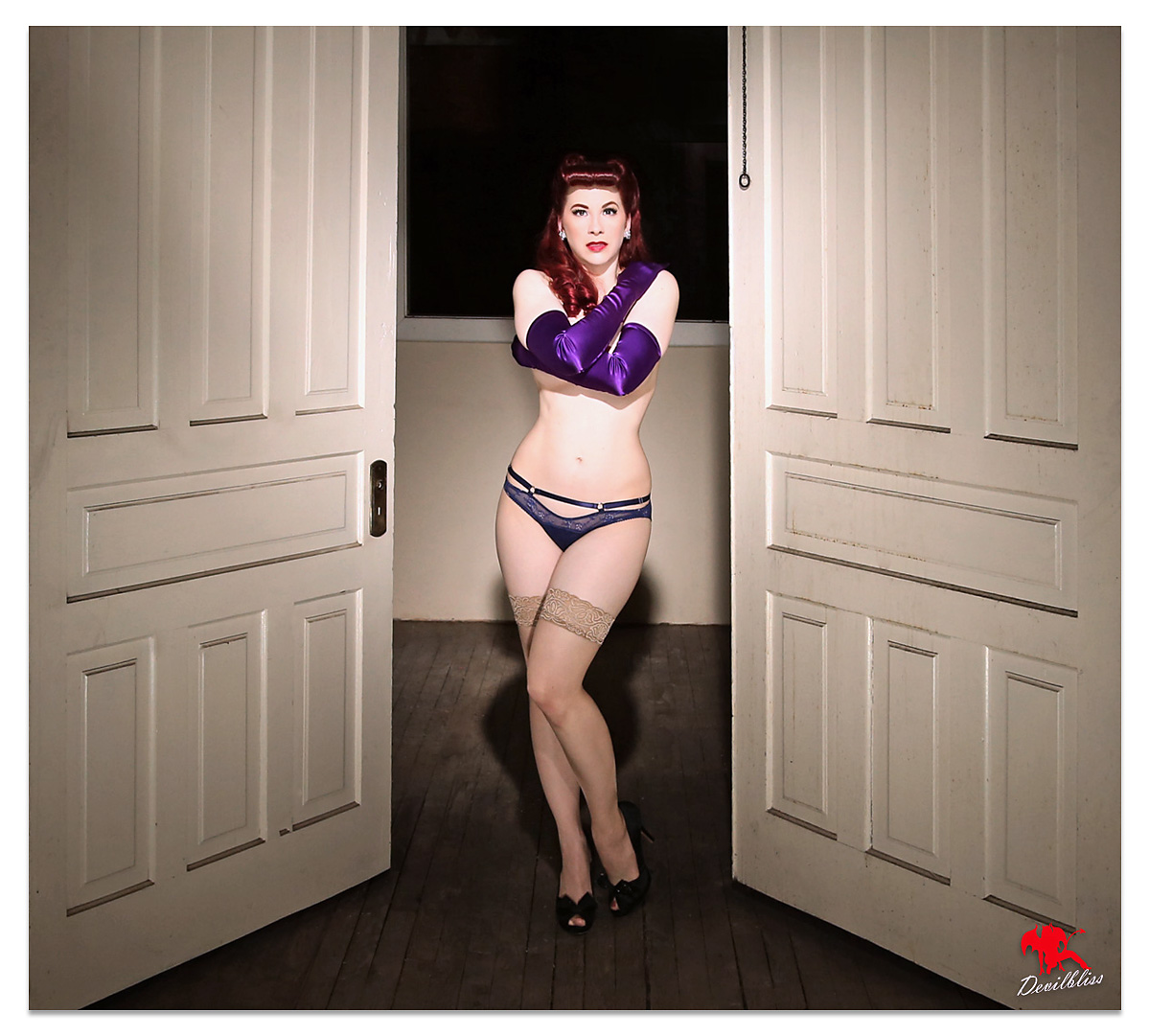 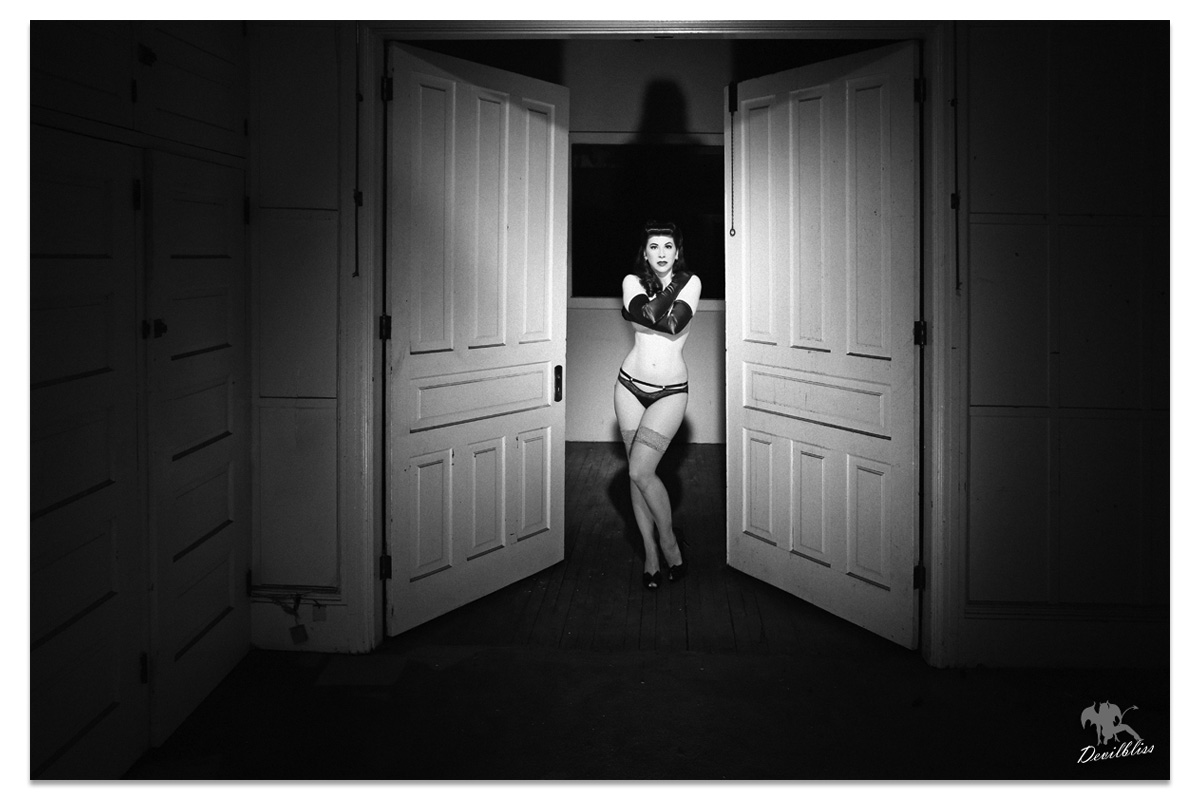 Aren’t those doors cool? And how about Miss V while we’re at it? So our 2000 sq ft studio is now 4000 sq ft and the potential is pretty amazing to me, so yeah, some things going on, exciting things at that.