Many of you who have worked with myself and Nicole of Making Faces Professional have more likely than not shot at my home studio. I’ve referred to it as Shangri-La and have always been pleased when visitors remark favorably to it. I grew up there, my father and his father built it, down to actually making their own cinderblocks. In my youth it was home to a family business, Bann’s Concrete Lawn Ornaments. 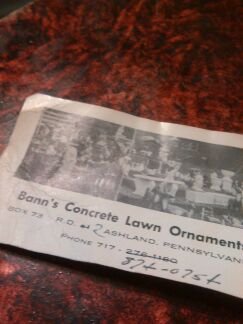 The lawn was filled with them, it made cutting the grass a pain in the ass.  Years later I would actually record musical acts there. I personally wrote many songs here over the years and of course most recently a huge body of photography. To say that the space has been somewhat magical is an understatement. Naming it Shangri-La was easy for this very reason.

Sometimes however things must change.

While shooting at my home has been rewarding, convenient and versatile, there have been things about it that are less than ideal. Some of you recently have noticed we’ve been having one devil of a time keeping on top of our exploding wardrobe collection. Between the outfits, lingerie, corsets, costumes, genuine vintage pieces and shoes it has honestly been impossible to organize and display these items as they should be. There has also been a similar trend with our prop pieces as well.  What has become our main shooting area while functional has had its own compromises as well.

The time has come.

We’re moving into a new space.

This past Saturday we visited a building nearby that had some offices available for rent. The location is good, the price attractive. Upon actually seeing it for the first time much about it felt perfect. One day and a handshake later and we’re officially announcing this. 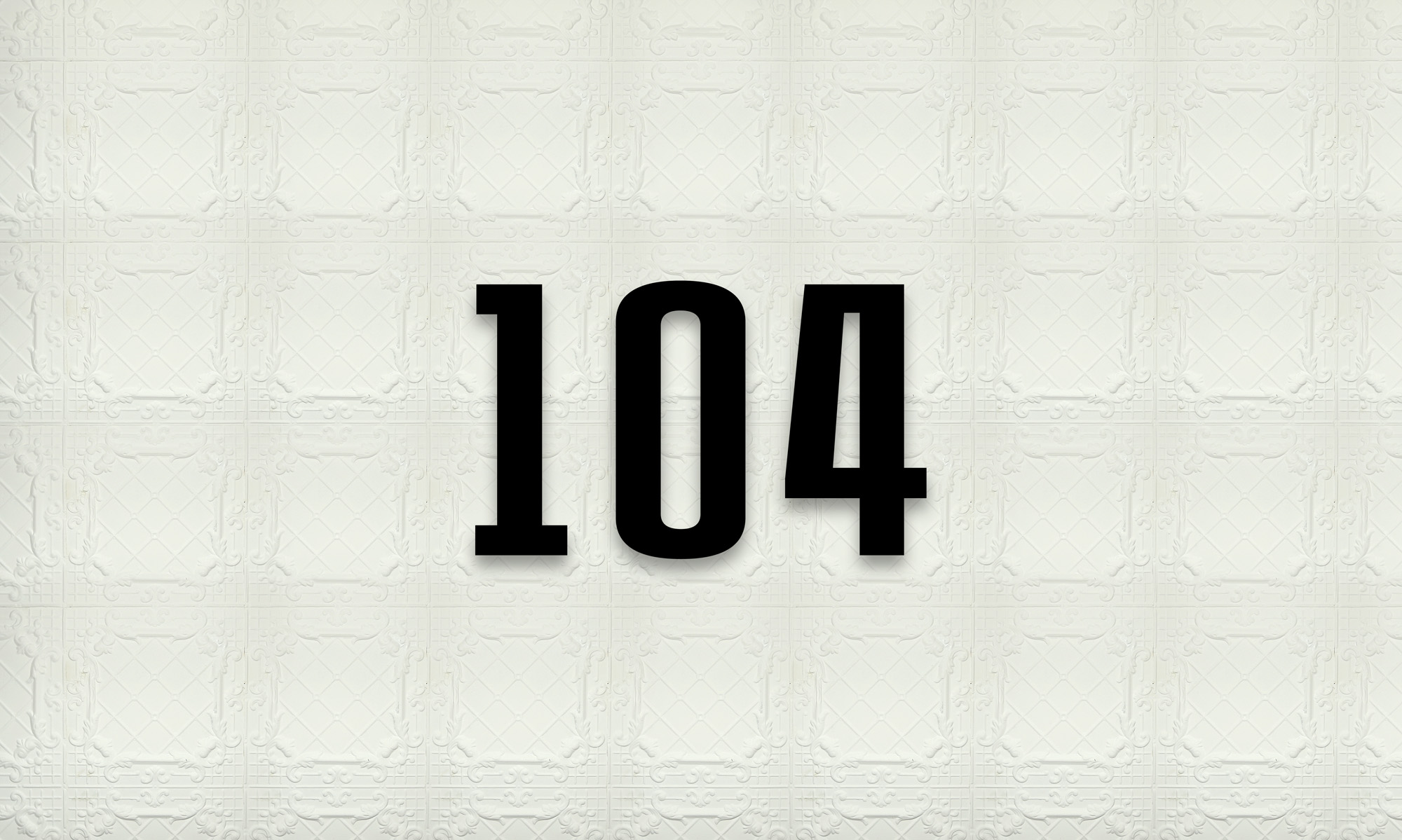 The building is right in downtown Pottsville at a major intersection. While it’s just off route 61 it is also at the intersection with route 209.  More on the logistics of the location later. First have a look!

The Devilbliss logo is not on the window (yet) but we like the way it will look eventually. Maybe it should be in gold leaf? We are on the second floor. As a matter of fact we are occupying the entire 2nd floor (which was originally offered as two rental units) This amounts to just around 1,600 square feet of space. 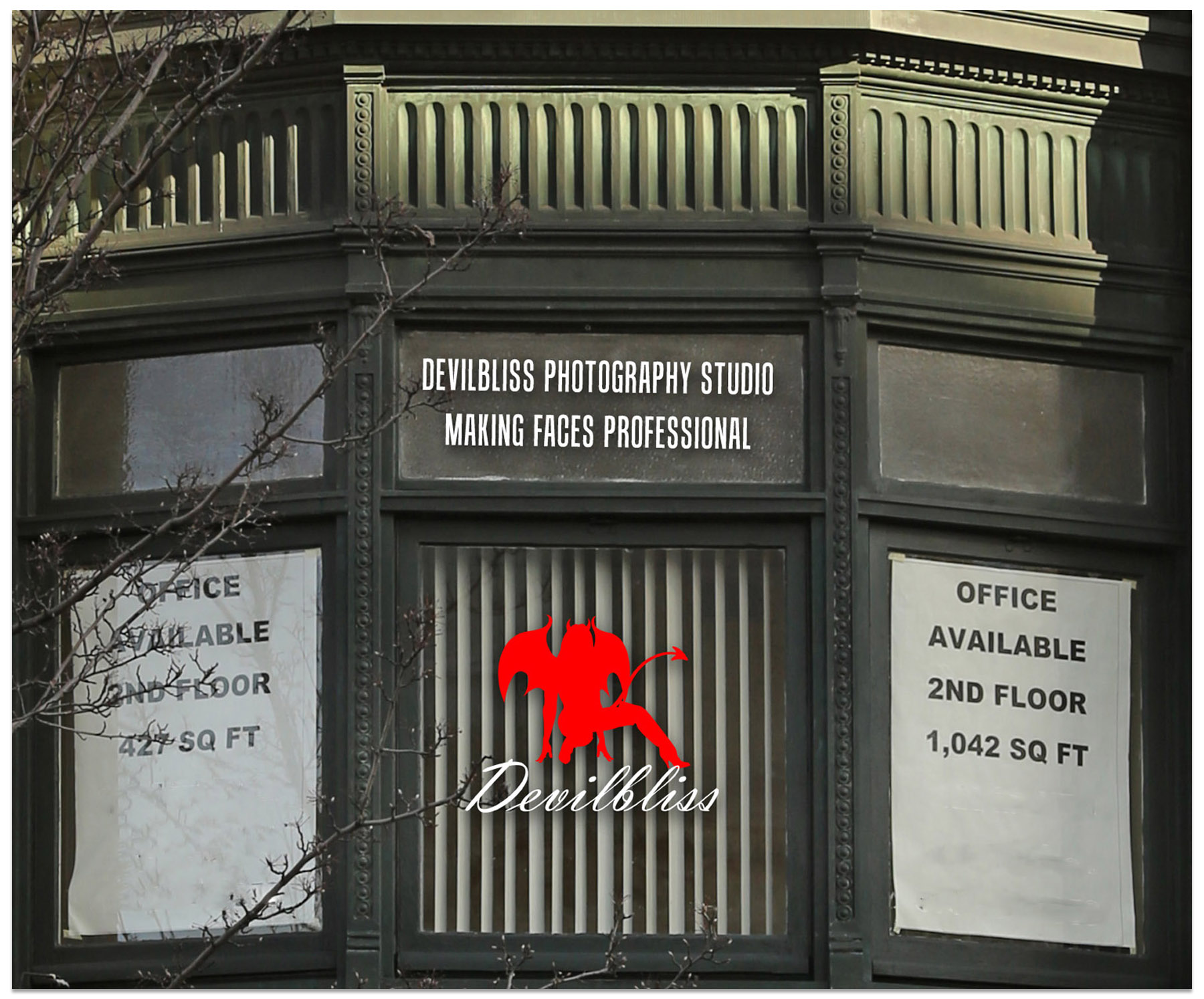 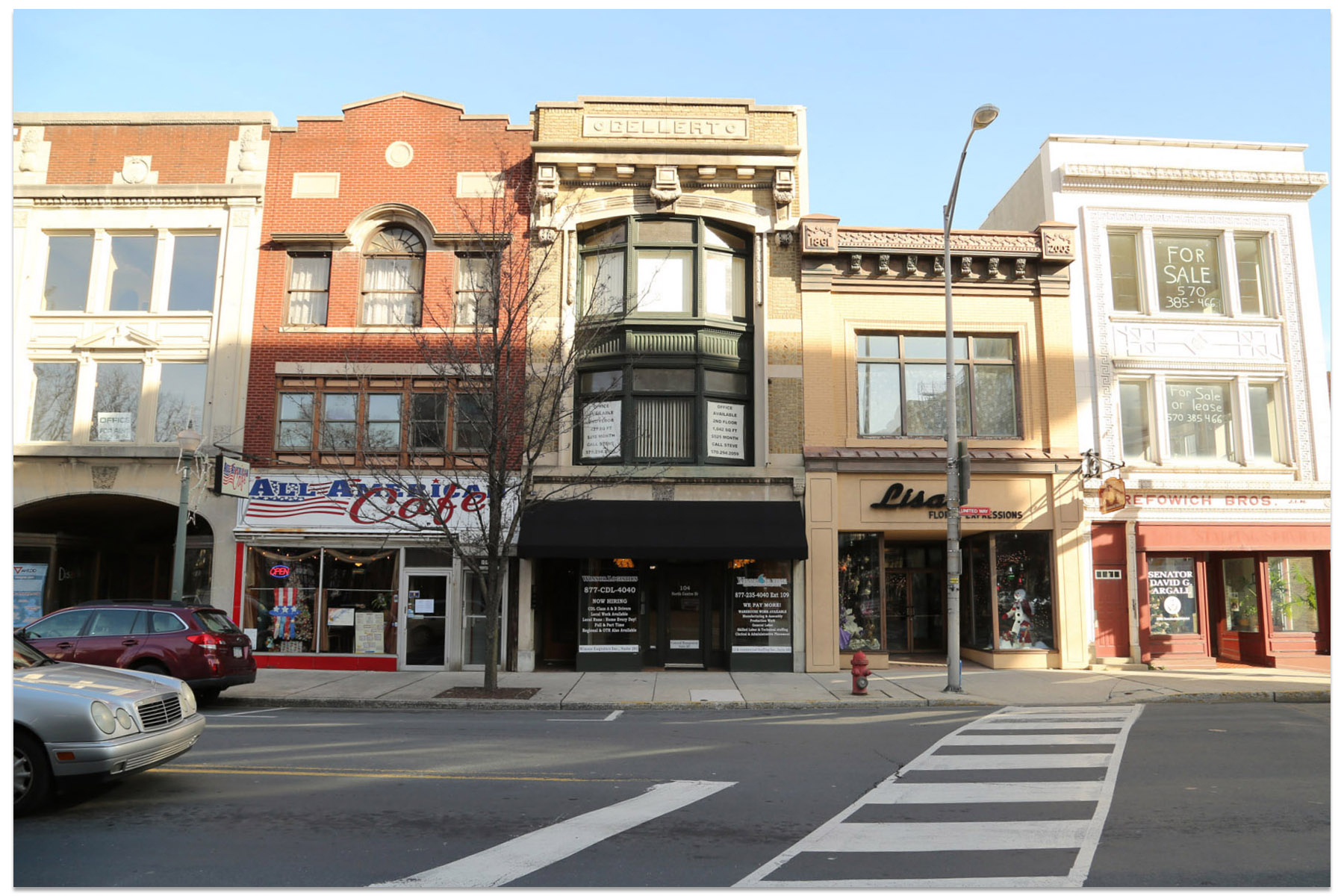 Here we are with our neighbors. 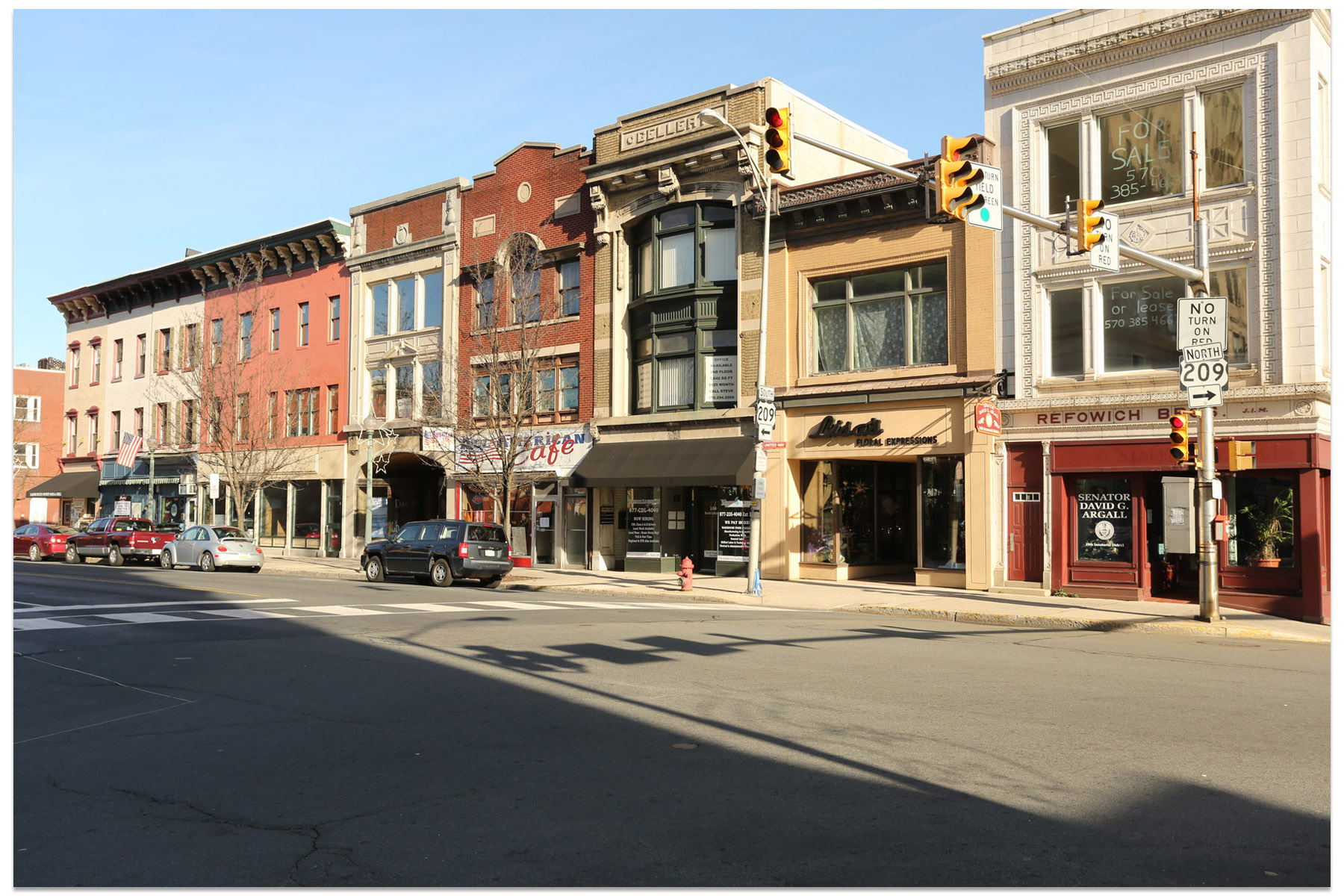 Another view from the adjacent corner. Interestingly the building to our immediate left is currently home to the All American Cafe. What’s interesting about this is that a) the building is owned by a long time friend and band-mate of Michael’s (even though the friend lives in Virginia Beach) and b) the burgers served there are a family recipe of Nicole’s.  In the past we’d have out-of-towners ask about places to eat, now in our new location several will be located within walking distance!

Below is a working floor plan, you can click any of the photos or graphics in this post to see them larger. 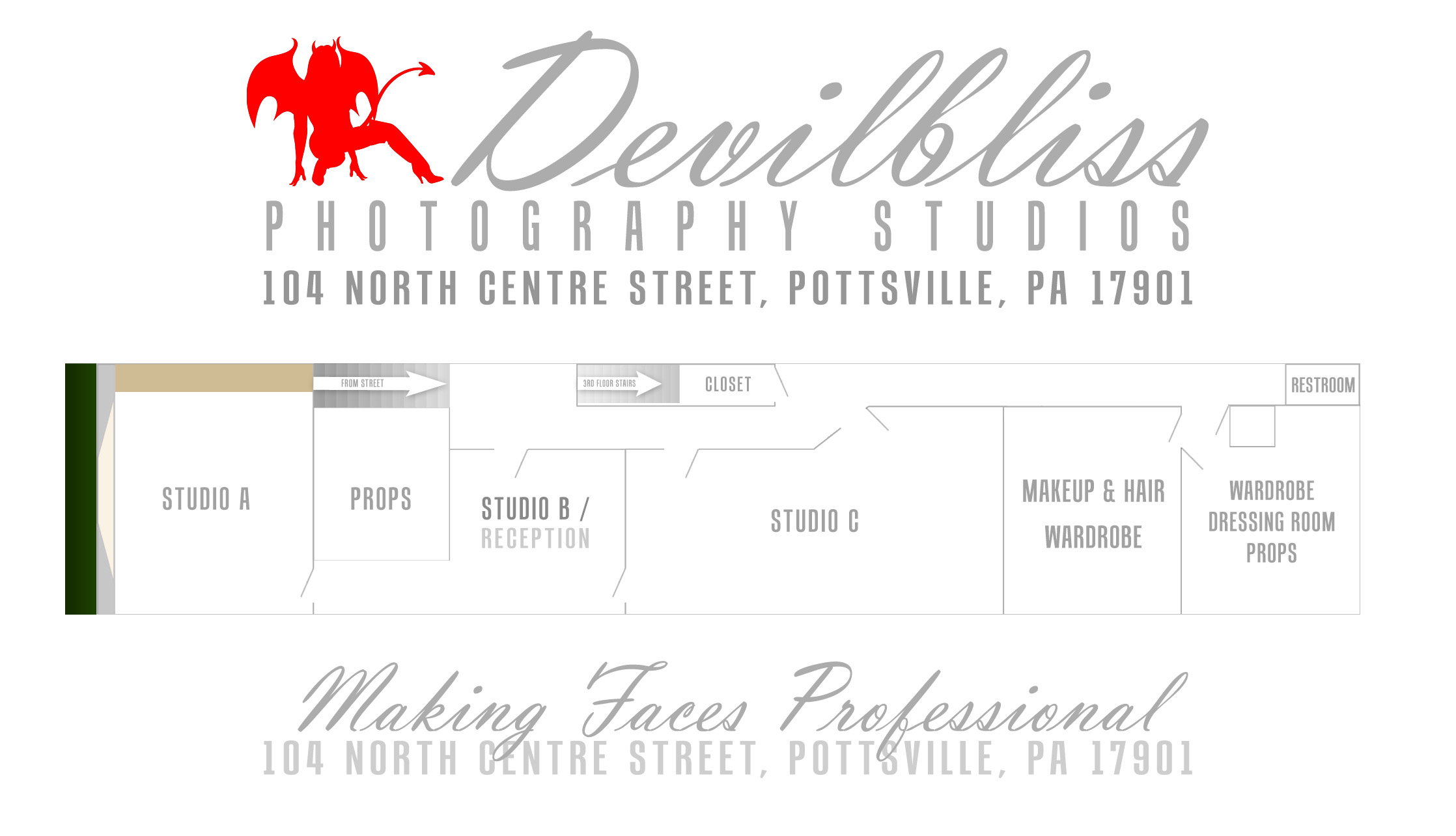 The space wasn’t cleaned prior to the walk through but we saw tremendous potential. The entire 2nd floor has its original tin ceiling in-tact. It became the background for the “104” teaser graphic you’ve seen. 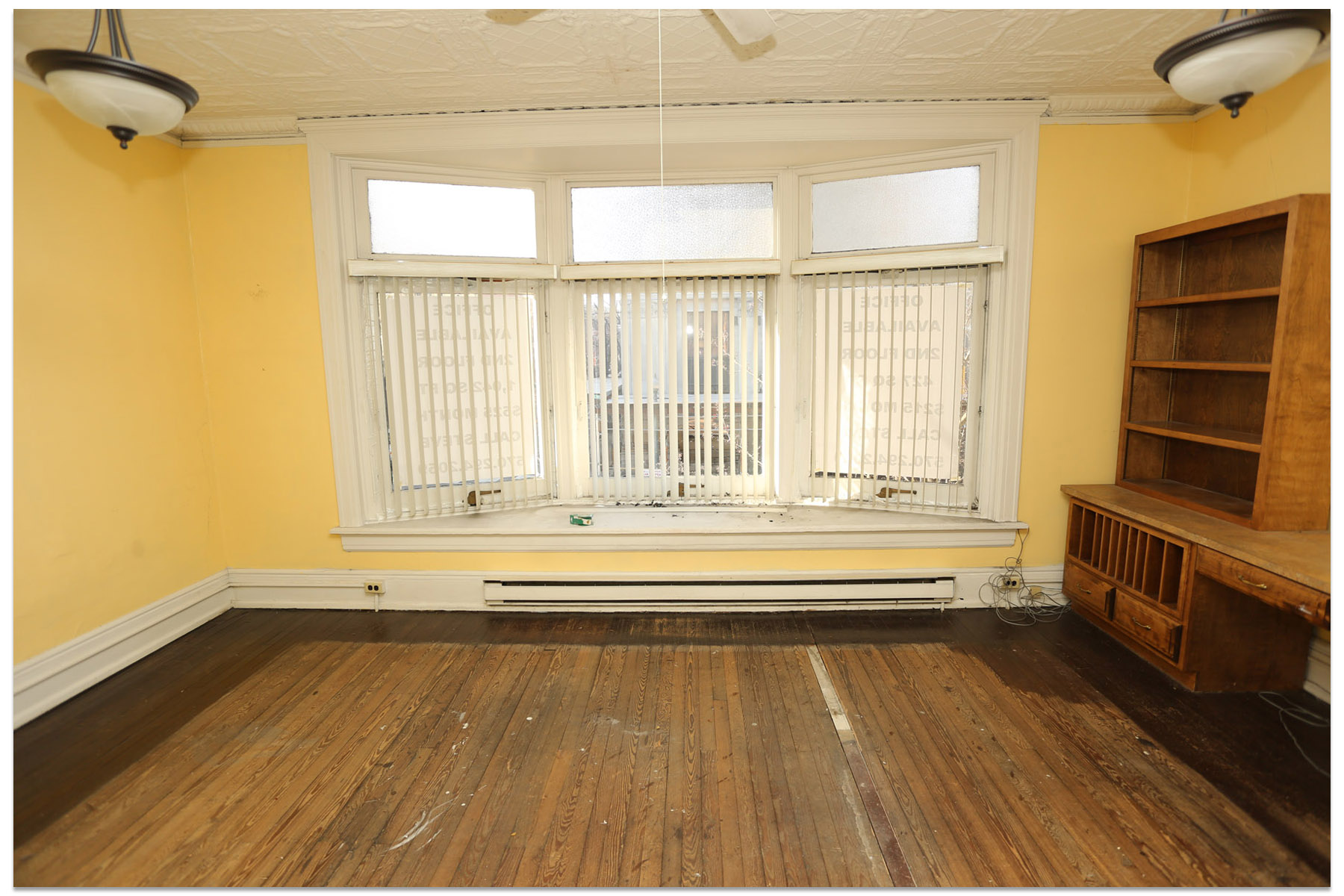 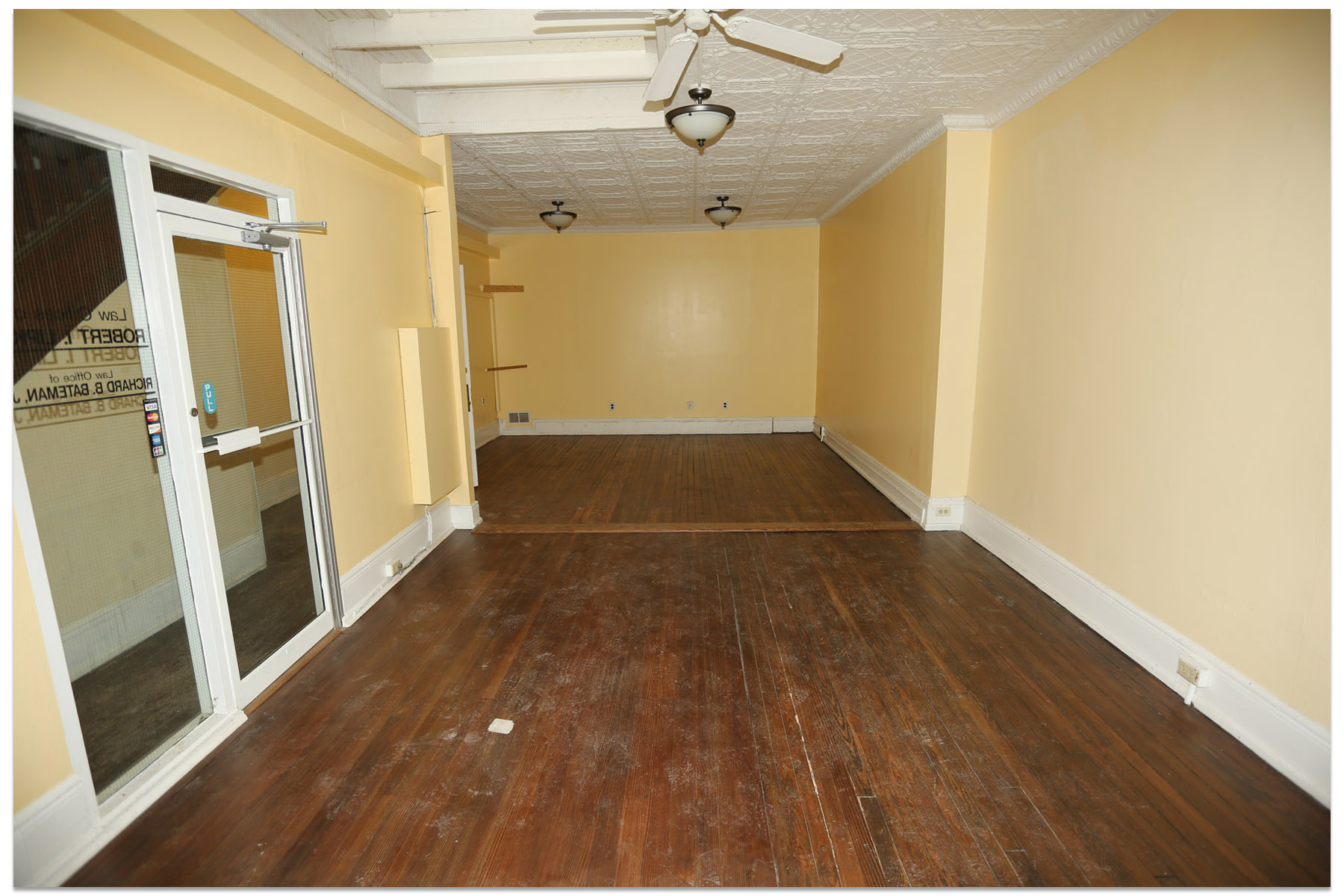 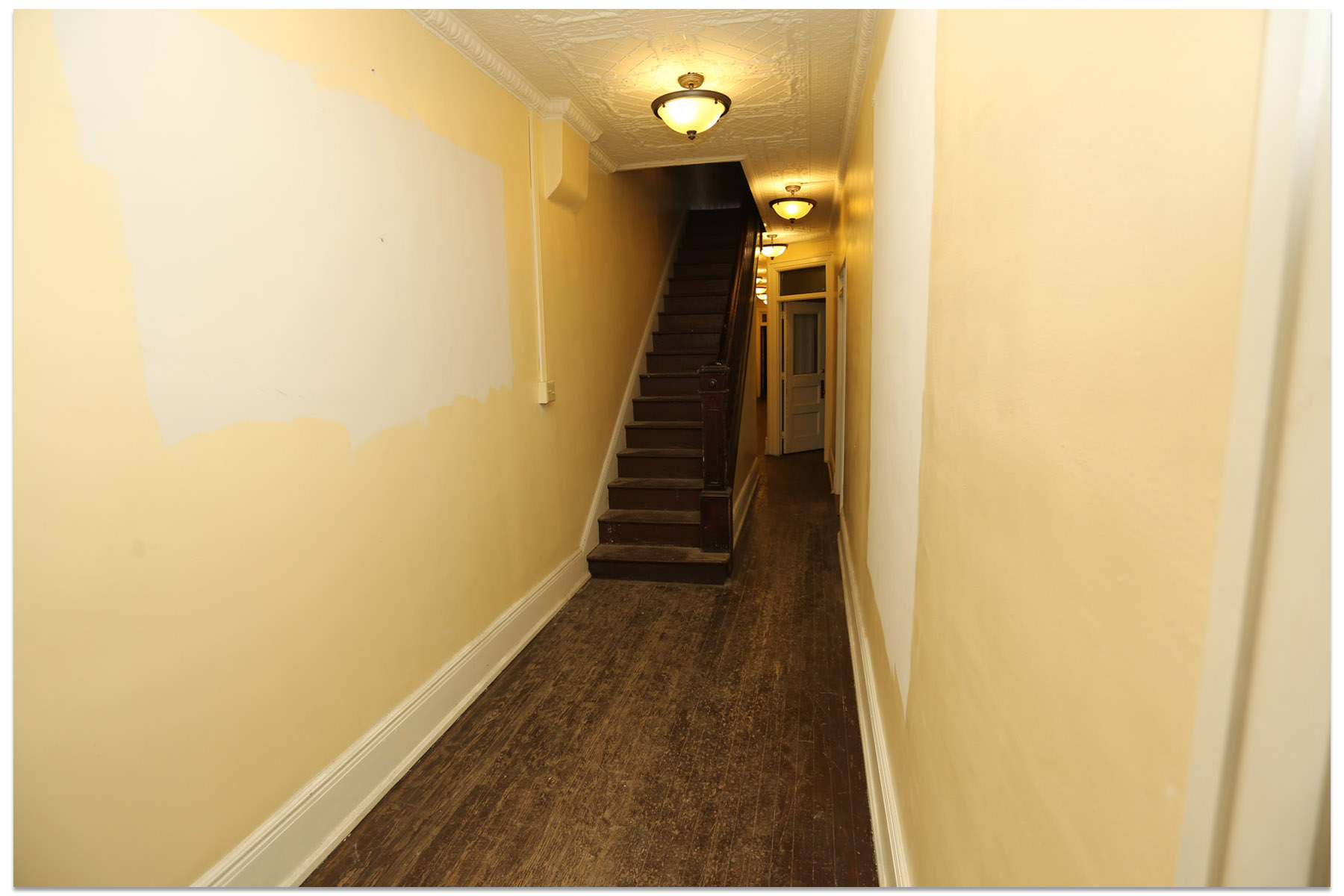 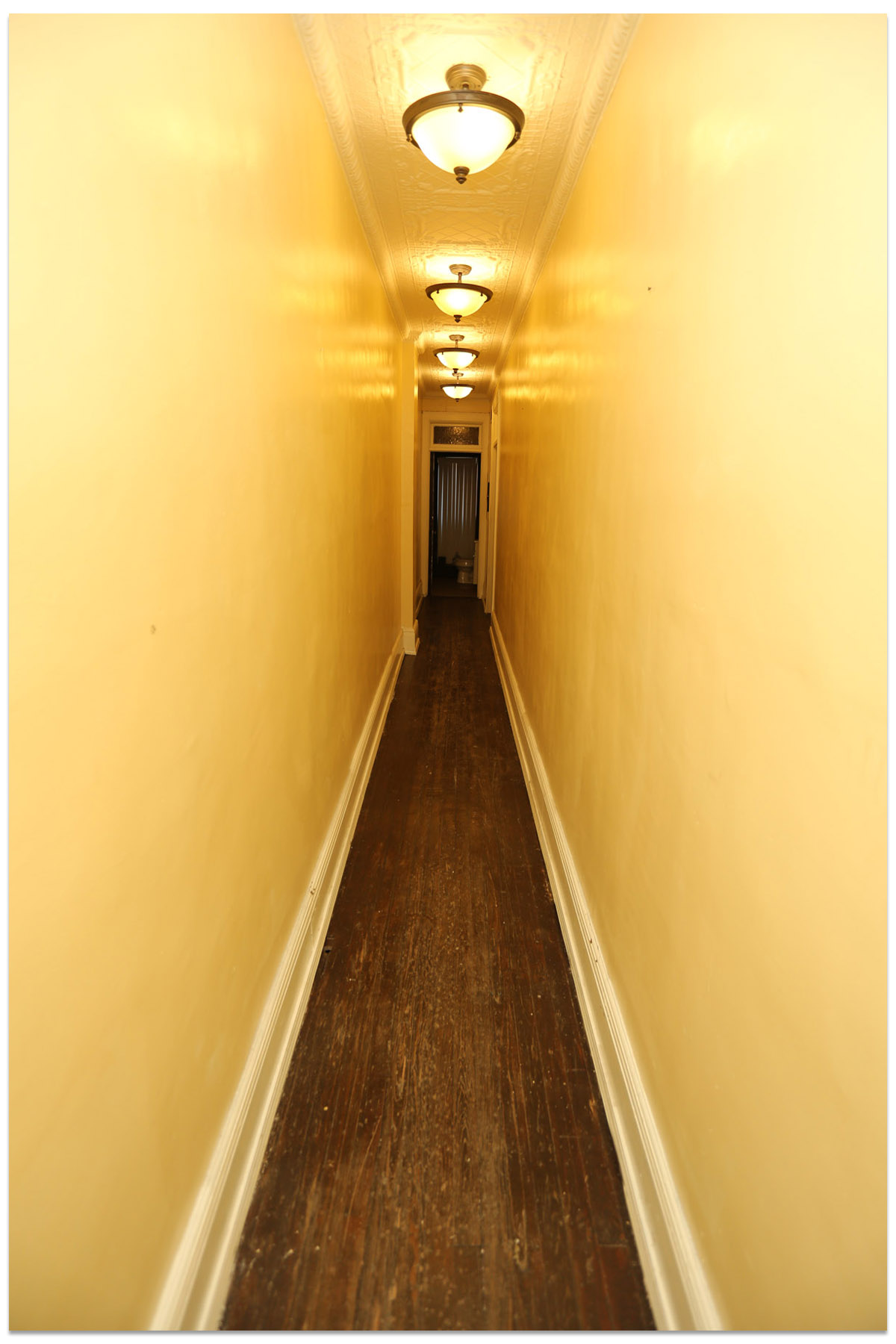 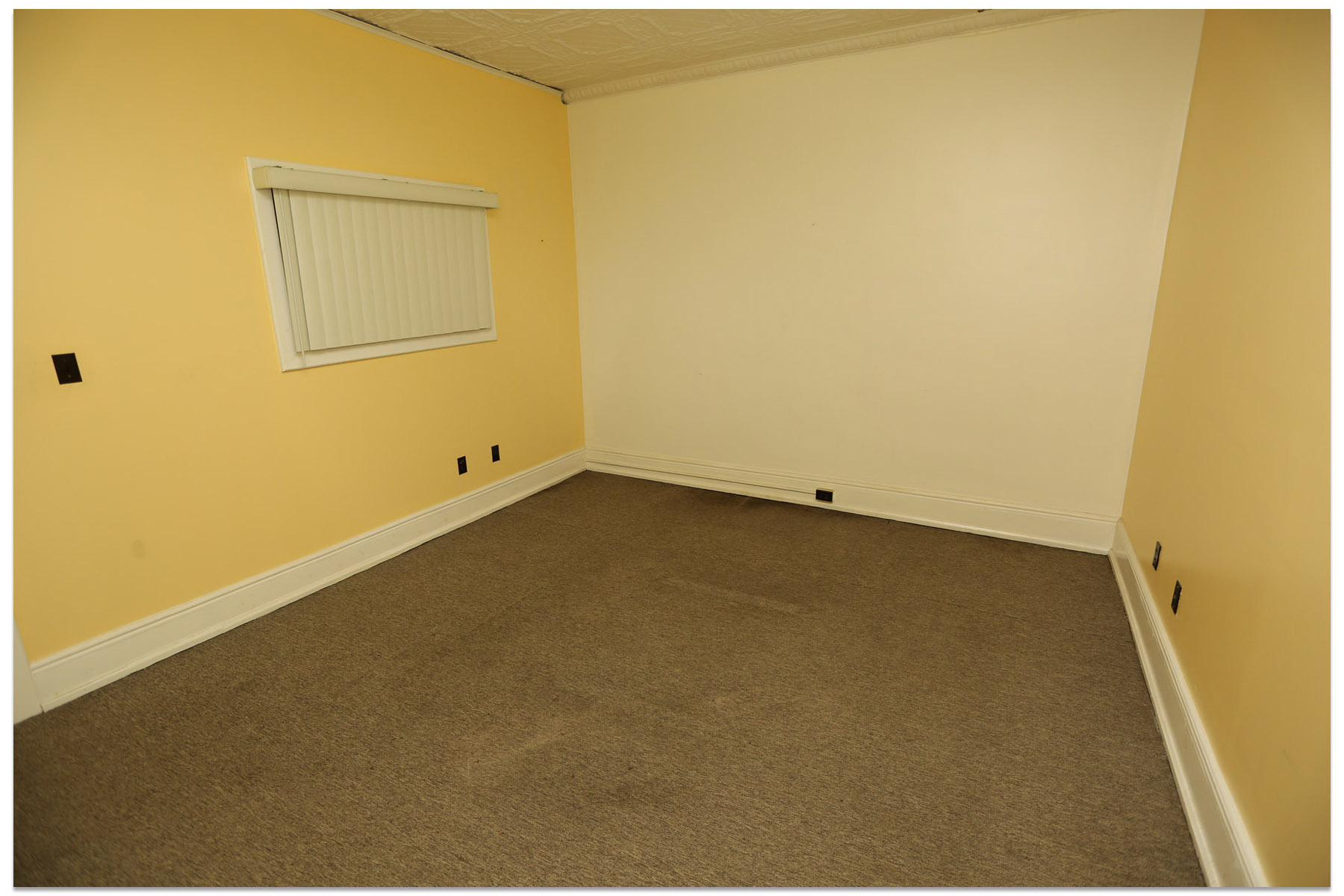 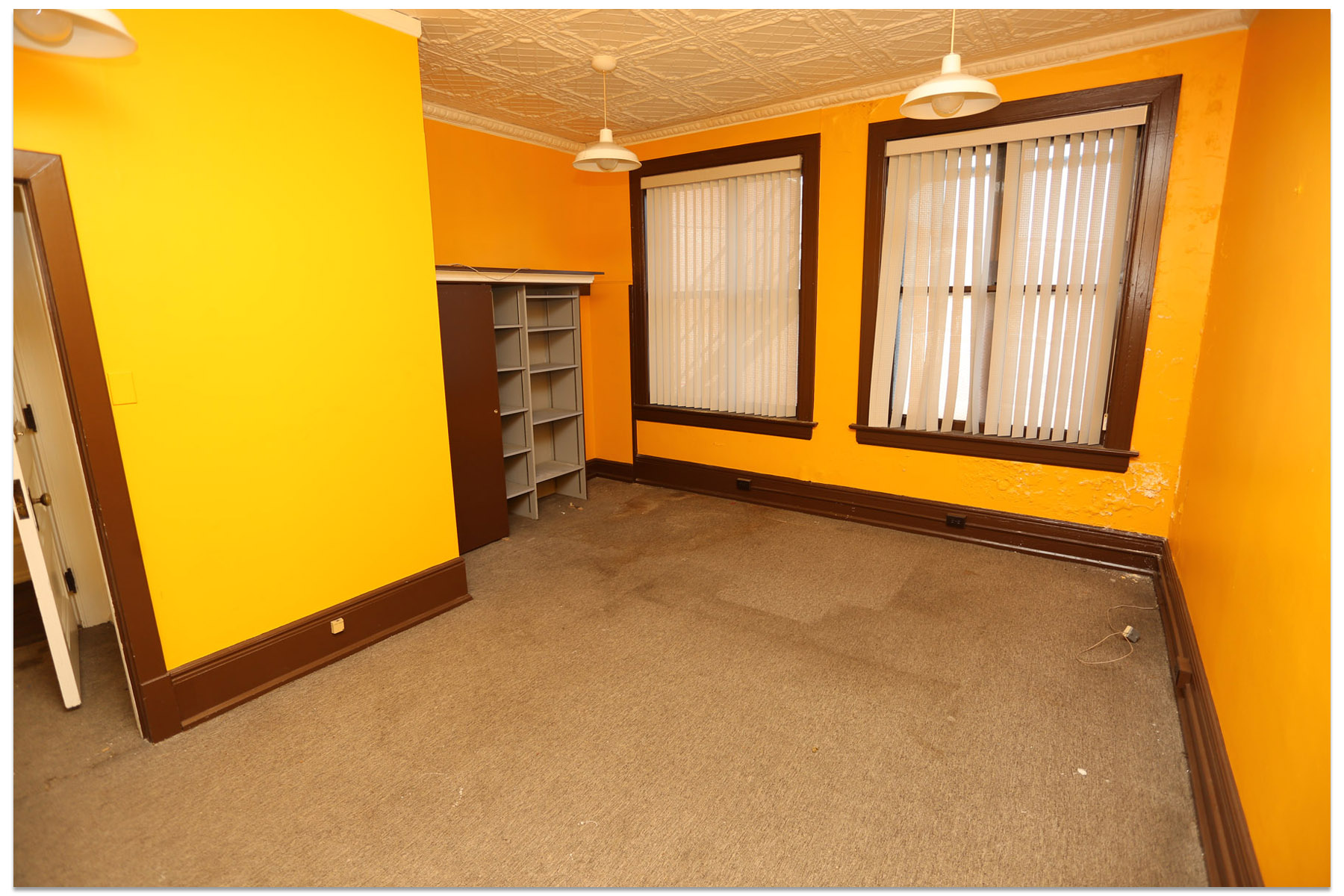 The studio is just several doors away from this parking lot which is free at the meters on weekends plus street parking directly in front of the studio is likely to have openings as well as weekend traffic is not heavy.

So just where is this new location? (Click for a larger view)

On the map above I have some markers for some of the places many of you are already somewhat familiar with. There’s a handful of you who actually pass through Pottsville on the way to the studio, so here it will shave off approximately 20 miles in total. For the rest who come via I-81 it will add about 14 miles. For those coming north on I-81 you’d take an exit for Tremont to pick up 209 South, which passes within feet of 104 North Centre, in the end this may be no more further than the current location. If you click on the map you’ll see the new location is literally just up the street from where Pinup Prom 2016 is being held.

This new location also provides an answer to a question we’ve heard so many times rom visitors from out of the area… “Where can I get something to eat? While it isn’t an insanely rich culinary mecca as you’d have on South Street in Philly or St. Marks in New York City we at least now have several options within short walking distance to the new studio. Some of you may have even been to one of these before during pinup prom or perhaps after a private shoot where we’ve taken you ourselves. Again, click the graphic for a larger view.

In no particular order the places within walking distance are:

All American Cafe, so close you may actually smell their fare while you shoot! This is a classic american style greasy spoon. That last part isn’t meant to be derogatory.

Roma Pizzera, totally remodeled and exciting in that they have a wood fired oven! This feels like a major pizzeria and is well appointed with food to match. A local landmark that has weathered the worst economic downturns the area has seen, a testament to their food and value.

Hong Kong Buffet, another local landmark and the choice for Asian tastes, right next to the Wooden Keg.

Ruby’s Kitchen. Tiny but good.  This was endorsed by our new landlord as something to check out.

Tex-Mex Diner. Located in the historic Garfield Diner where JFK made a stop during his presidential campaign, remember what we said about the area having a large Irish population? We’ve taken several of you here over the past year and feedback has been that this is excellent food at very reasonable prices.

The Greystone. We sent several of you here during Pinup Prom. It’s where you go when you want something above the fray. Perfect for a couple after the lady has gotten all spruced up by Making Faces Pro. Greyston happens to be a favorite of Nicole’s.

Farlow’s Deli. No website or FB presence. BUT, for traditional Philly style hoagies and sandwiches. This is THE place to go. HUGE sandwiches for the dollar. Very spartan in appearance but what you don’t get in fancy you get in value. One whole sub will run you about $15 but has the density of about 30 Subway sandwiches, and it isn’t bread weight it’s the meats which happen to be Boar’s Head.

Sage Coffee House and Tea Room. Literally a stone’s throw from the new studio this quaint Cafe will make you forget about that huge Seattle based chain.

Also shown on the map is the Yuengling Brewery.
America’s Oldest Brewery! Still operating its original location you can take tours every day except Sunday. Yuengling trades places as the largest American owned brewer with Boston Brewing (Sam Adams). All the others are now part of huge euro-conglomerates.

Further down on south Centre you can also find Jerry’s Classic Cars & Collectibles Museum. More than just cars it has quite a bit of great displays of antiques. Worth the visit if you are shooting with us. 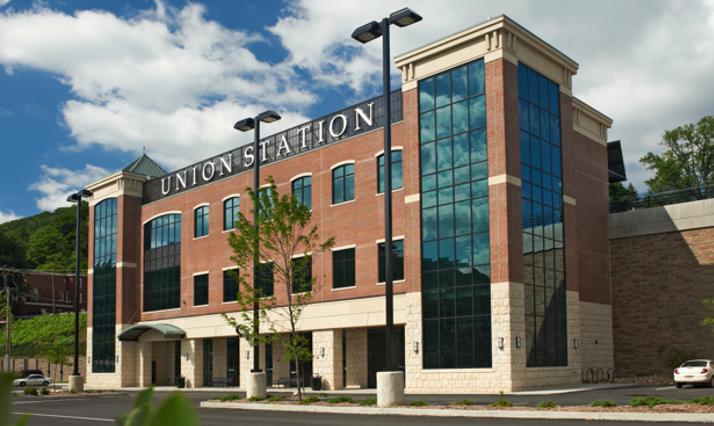 The new studio is also a mere two-tenths of a mile and 6 minutes walking time from Union Station. With Greyhound bus service this means those of you from Philadelphia and New York City can travel to us by bus, take a short walk on the same side of the street and get back home again without ever needing a cab or a ride while in Pottsville!